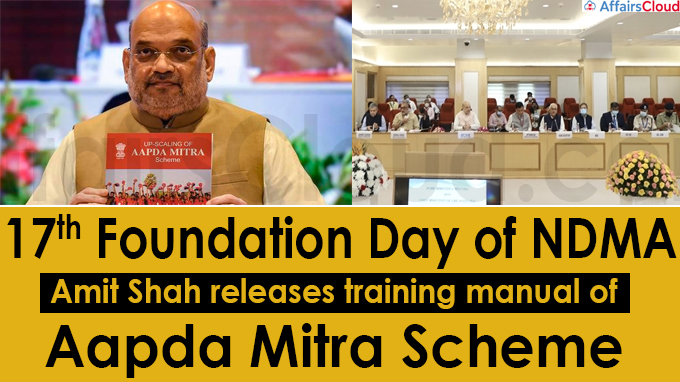 Union Minister of Home Affairs and Minister of Cooperation Amit Shah attended the 17th Foundation Day celebrations of National Disaster Management Authority (NDMA) as the chief guest in New Delhi. The theme for 2021 was ‘Stopping Impact of Disaster Incidents in the Himalayan Region’.

i.The Aapda Mitra scheme was launched in May 2016 in 25 flood-prone states at a cost of nearly Rs. 16 crore.

ii.NDMA focuses on training around 6,000 community volunteers (200 volunteers per district) in disaster response in selected 30 most flood prone districts of 25 States of India.The scheme will be implemented in 350 disaster affected districts.

Objective of the scheme –

i.It is a disaster alerting or warning system.

ii.The pilot project is being implemented in Tamil Nadu. It would facilitate dissemination of location based targeted alerts/ warnings through SMS in vernacular language.

Additional Information – Government of India has started the Subhash Chandra Bose Aapda Prabandhan Puraskar for all the NGOs, social workers and government employees engaged in disaster management to encourage and acknowledge their work.

About NDMA
i.It stands for National Disaster Management Authority
ii.It is an apex body in disaster management
iii.Headed by Prime Minister of India