We are here for you to provide the important Recent and Latest Current Affairs 30 September 2021, which have unique updates of Latest Current Affairs 2021 events from all newspapers such as The Hindu, The Economic Times, PIB, Times of India, PTI, Indian Express, Business Standard and all Government official websites. 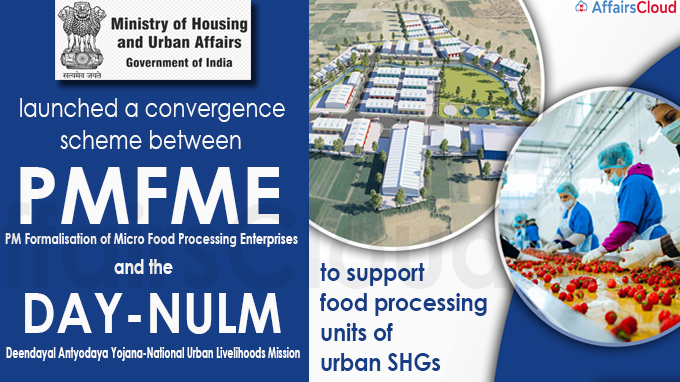 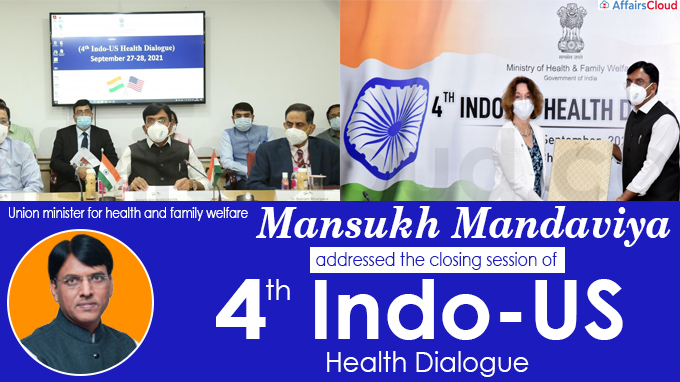 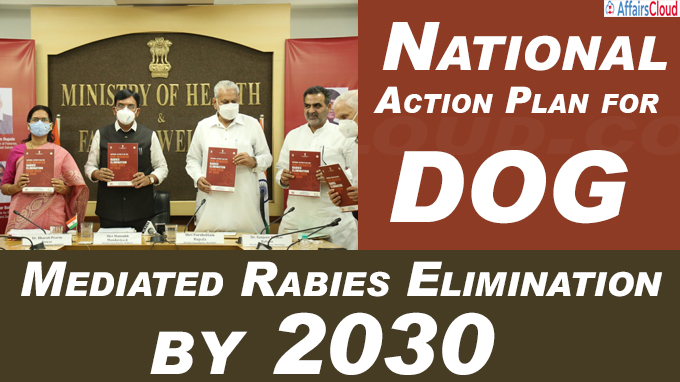 On September 28, 2021 i.e. on the occasion of World Rabies Day, the Central Government has launched a National Action Plan for dog Mediated Rabies Elimination by 2030 (NAPRE) for the elimination of dog mediated rabies by 2030.

Key Points:
i.The Union Ministers also launched the Joint Inter-Ministerial Declaration Support Statement for the elimination of dog mediated rabies from India by 2030 through the One Health Approach.
ii.Notably 33% of global rabies deaths are recorded in India.
iii.Rabies is a deadly zoonotic disease which spreads to people from the saliva of infected animals like dogs and other mammals. It causes inflammation of the brain and spinal cord.
Other Participants:
Ministers of State (MoS) Dr. Bharati Pravin Pawar, MoH&FW; and Sanjeev Kumar Balyan, MoFAHD, among others 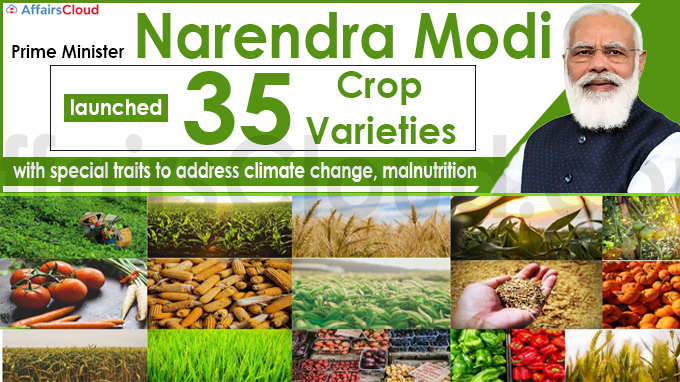 On September 28, 2021, the Prime Minister of India Narendra Modi launched 35 crop varieties which are climate resilient and higher nutrient-content. Union Minister of Home Affairs and Minister of Cooperation Amit Shah attended the 17th Foundation Day celebrations of National Disaster Management Authority (NDMA) as the chief guest in New Delhi. The theme for 2021 was ‘Stopping Impact of Disaster Incidents in the Himalayan Region’. The Jawaharlal Nehru Manipur Dance Academy(JNMDA), Imphal, Manipur has organised the ‘Nata-Sankirtana’, a 3-day dance and music festival from 28th to 30th September 2021. The Nata-Sankirtana is one of the annual features of the JNMDA, to promote Nata Sankirtana among the young generation.

About Nata-Sankirtana:
i.The Nata-Sankirtana was introduced during the reign of Bhagyachandra, who ruled Manipur during 1759-1761 and 1763-1798.
ii.He was also known as Ching-Thang Khomba to the hill peoples, Jai Singh to the British and the Assamese and Karta to the Vaishnavs.
iii.Nata Sankirtana is a hymn of Lord Krishna in classical ragas produced with various indigenous rhythms.
iv.It is performed to mark various occasions of a person’s life.
About Manipur:
Chief Minister– Nongthombam Biren Singh
Capital– Imphal
Stadium– Imphal indoor stadium; Yawa indoor stadium The chairman of Central Board of Indirect Taxes (CBIC), M Ajit Kumar and Acting Commissioner of United States (US) Customs & Border Protection, the Department of Homeland Security, Troy Miller  signed a Mutual Recognition Arrangement (MRA) to recognise each other as Authorised Economic Operators(AEO).
Benefits of MRA agreement
i.This agreement would enhance the export of both the countries and provide  faster clearances through customs procedures.
ii.It will also boost the supply chain security and trade facilitation.
About CBIC (Central Board of Indirect Taxes)
i.It works under the Department of Revenue, Finance Ministry, Government of India. CBIC is a statutory body established under the Central Boards of Revenue Act, 1963.
ii.It engages in policy formulation of matters concerned with the levy and collection of central excise duties, customs, central goods and services tax and IGST, administration of these taxes, prevention of smuggling and also narcotics to the extent prescribed.
iii.The CBIC was previously known as the Central Board of Excise and Customs (CBEC).
About US (United States)
President-Joe Biden
Currency- United States dollars
Capital- Washington DC 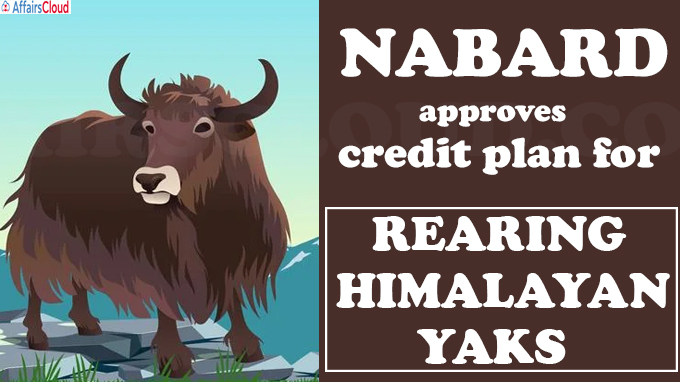 National Bank for Agriculture and Rural Development (NABARD) has approved a credit plan for yak husbandry in Arunachal Pradesh to support the herders to secure loans and strengthen their livelihoods.
Key Points:
i.The scheme was developed by the National Research Centre on Yak (NRCY).

ii.The credit plan was verified by NABARD, it will enable the commercial banks to extend advances and it has been included in the potential linked credit plans (PLCP) of Tawang, West Kameng, and Shi Yomi districts of Arunachal Pradesh.
iii.The scheme will improve the economic dividends of yak herders in the Eastern Himalayas.
iv.It will also be supportive to overcome the declining trend of the yak population along with facilitating profitable yak farming through the promotion of entrepreneurship. 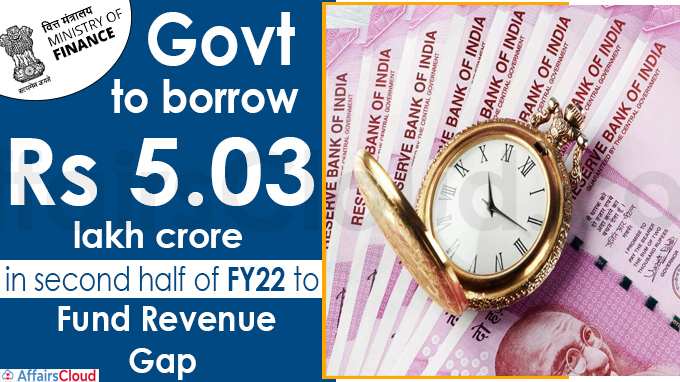 The Government of India (GoI), in consultation with the Reserve Bank of India (RBI), has decided to borrow Rs 5.3 lakh crore for the second half (H2) of FY22 i.e (October 2021 to March 2022) to fund the revenue gap for reviving the economy (affected by COVID-19).

LIC Tie-up with DoP for Print to Post Solution 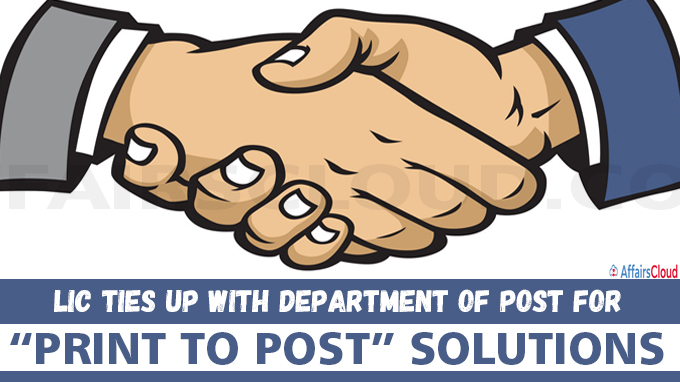 In September 2021, the Life Insurance Corporation (LIC) of India made an agreement with the Department of Posts (DoP) for availing of the ‘Print to Post’ solution.

Department of Posts (DoP):
i.It comes under the Ministry of Communications. India has been divided into 23 postal circles along with another Circle, named Base Circle, to cater to the postal communication needs of the Armed Forces.
ii.With more than 1,55,000 post offices, the DoP has the most widely distributed postal network in the world.
iii.The DoP acts as an agent for the Government of India for other services such as the Mahatma Gandhi National Rural Employment Guarantee Scheme (MGNREGS), wage disbursement and old age pension payments.
About Department of Posts (DoP):
Headquarters – New Delhi, Delhi
Secretary – Vineet Pandey
Director General – Alok Sharma ​
About Life Insurance Corporation (LIC)of India:
Establishment – 1956
Headquarters – Mumbai, Maharashtra
Chairman – M R Kumar Jammu and Kashmir (J&K) Bank today received Rs 500 Cr as capital from the Government of Union Territory (UT) of J&K, through which the UT will acquire over 16.76 crore shares (6.06 percent) in the Bank. 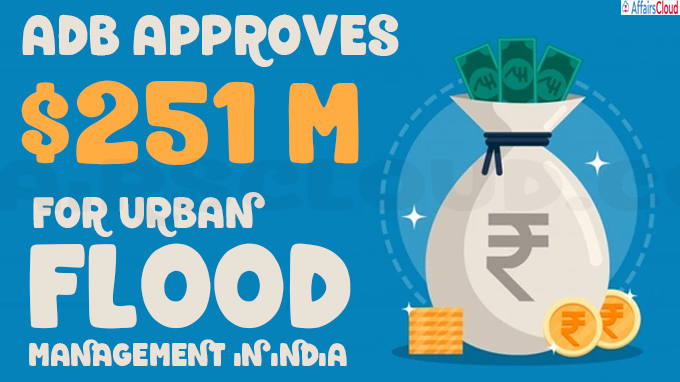 The Asian Development Bank (ADB) has approved a loan of $251 million for urban flood protection and management in the Chennai–Kosasthalaiyar river basin in India. 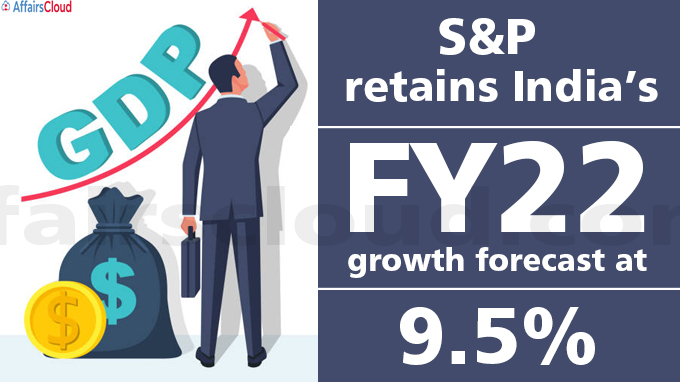 S&P Global Ratings Retained India’s Economic Growth Projection in FY22 to 9.5 percent. The rating agency has reported a strong recovery in economic activity in India after the second wave of COVID-19. 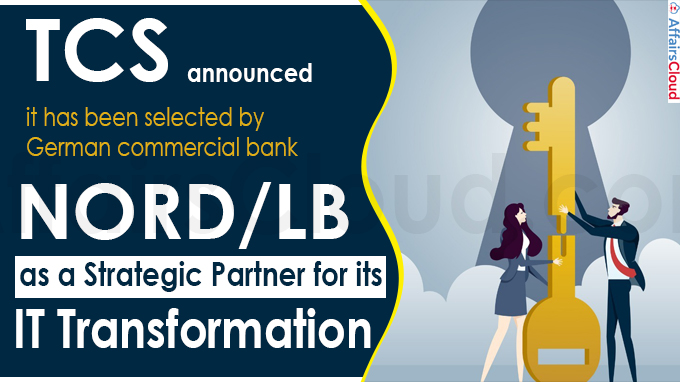 The Indian Information Technology (IT) company Tata Consultancy Services(TCS) has been selected by NORD/LB (Norddeutsche Landesbank Girozentrale) as the strategic partner for its IT transformation. NORD/LB  is a German Landesbank and one of the largest commercial banks in Germany.
At present,  TCS partners with over 100 leading German corporations which also include 20 of the DAX40 ( Deutscher Aktien Index—is a stock index of Germany).
Key points
i.It is a 5 year partnership, TCS will work with the bank and facilitate simplification and transformation of its application estate business in financial, wholesale and retail banking.
ii.TCS will also provide its IT and consultancy services to the bank. It will enhance the deep  penetration in the financial market, global delivery capabilities, customer focus and strong transformation capabilities of the bank.
About NORD/LB (Norddeutsche Landesbank Girozentrale)
Headquarters: Hanover, Germany
Chair of Managing Board: Thomas Bürkle
Founded: 1 July 1970
About Newgen Software
Managing Director and Chairman-Diwakar Nigam
Founded– 1992
About TCS (Tata Consultancy Services)
Headquarters– Mumbai, Maharashtra
Chief Executive Officer– Rajesh Gopinathan
Founded– 1 April 1968
>>Read Full News 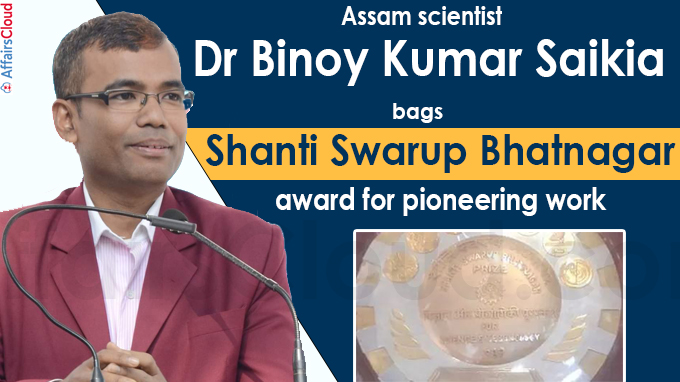 Binoy Kumar Saikia, a senior scientist at CSIR-North East Institute of Science and Technology (CSIR-NEIST), Jorhat, Assam, has won the Shanti Swarup Bhatnagar Prize (SSB) for Science and Technology 2021 for his pioneering research in the field of coal and energy. He won the award given by the Council for Scientific and Industrial Research (CSIR) under Earth, Atmosphere, Ocean and Planetary Sciences category.

Dr Jeemon Panniyammakal of AMCHSS won SSB prize 2021 under Medical Sciences:
Dr Jeemon Panniyammakal, Associate professor of Epidemiology, The Achutha Menon Centre for Health Science Studies (AMCHSS), Kerala won the SSB Prize for Science and Technology 2021 for his research in the prevention of cardiovascular diseases in India.
He won the award under the Medical Science category. 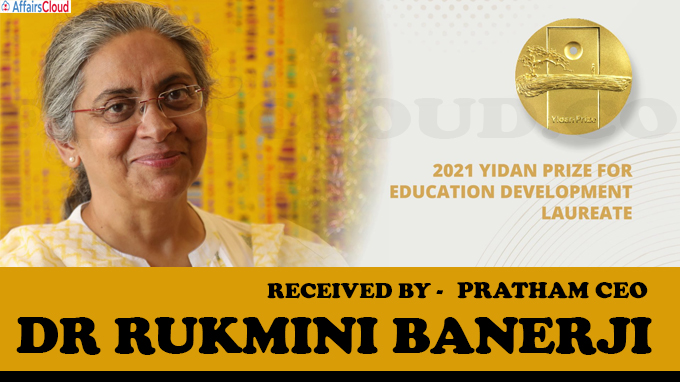 Dr Rukmini Banerji, Chief Executive Officer(CEO) of  Pratham Education Foundation, India and Eric A. Hanushek, professor at Stanford University, has been awarded the 2021 Yidan Prize, the world’s highest education accolade, recognising their work on improving the quality of education and outcomes for learners at scale.

About Yidan Prize:
i.The Yidan Prize was founded in 2016 by Dr Charles Chen Yidan in the belief that education promotes well-being.
ii.The prize recognizes the individuals or a team (not more than 3 members), contributing to education in 2 categories, 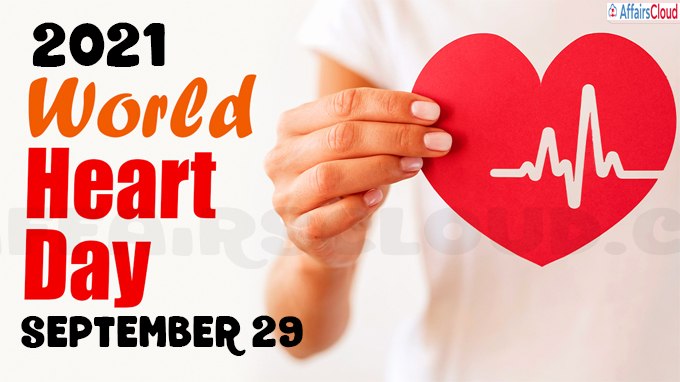 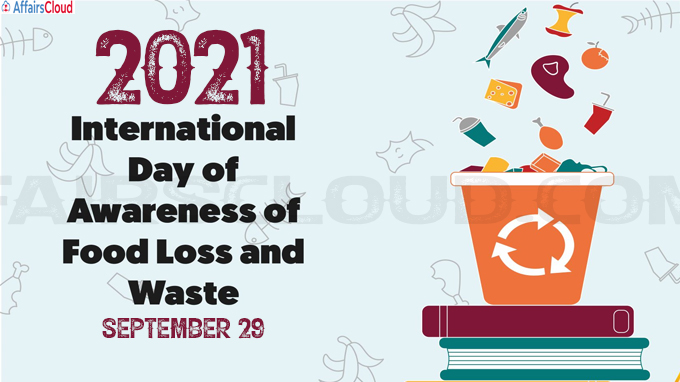 United Nations(UN)’s International Day of Awareness of Food Loss and Waste (IDAFLW)  is annually observed across the globe on September 29th to focus on the opportunities to reduce food loss and waste and restore a resilient ready food system.

29th September 2021 marks the observance of the 2nd IDAFLW.
Events 2021:
FAO and UNEP have organised a global event “Stopping food loss and waste. For the people. For the planet” as a part of the observance of IDAFLW 2021.
Background:
i.The United Nations General Assembly(UNGA) adopted the resolution A/RES/74/209 on 19th December 2019 and proclaimed the 29th September of every year as the International Day of Awareness on Food Loss and Waste.
ii.The first ever IDAFLW was observed on 29th September 2020.
About Food and Agriculture Organization of the United Nations(FAO):
Director-General– QU Dongyu
Headquarters– Rome, Italy
>>Read Full News 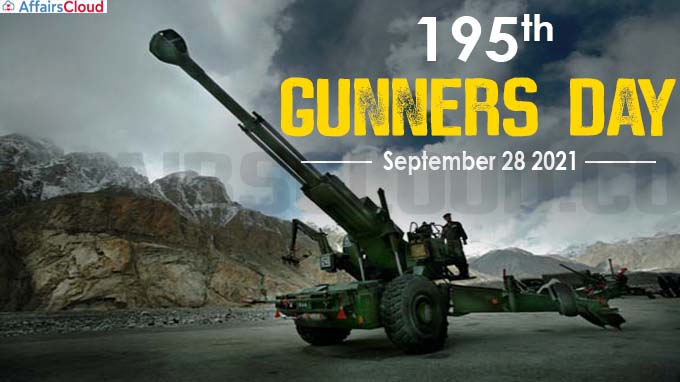 The Regiment of Artillery, an operational arm of the Indian Army, annually observes September 28th as the “Gunners Day” to mark the anniversary of its raising.
The day commemorates the raising of 5 (Bombay) Mountain Battery, equipped with 2.5-inch Guns as the 8th Company of the Golandaz Battalion, Bombay Foot Artillery, India’s first Artillery unit, on 28th September 1827.
The 28th of September 2021 marks the observance of the 195th Gunners day.
Artillery:
i.Artillery is a class of heavy military ranged weapons built to launch munitions far beyond the range and power of infantry firearms
ii.The word “artillery” refers to a group of soldiers primarily armed with some form of manufactured weapon or armour.
Significance of Regiment of Artillery:
i.The Regiment of Artillery, the second-largest arm of the Indian Army, has been a part of the Indian defence since its independence.
Motto – “Sarvatra Izzat-O-Iqbal” – “Everywhere with Honour and Glory”
ii.The achievements of the regiment of artillery include 1 Victoria Cross, 1 Distinguished Service Order, 15 Military Crosses during the pre-independence era and 1 Ashok Chakra, Seven Maha Vir Chakras, Nine Kirti Chakras, 101 Vir Chakras, 63 Shaurya Chakras, 6 Bar to Sena Medal, 502 Sena Medals besides many other decorations.

Karnataka to sign three MoUs with Infosys for welfare of students 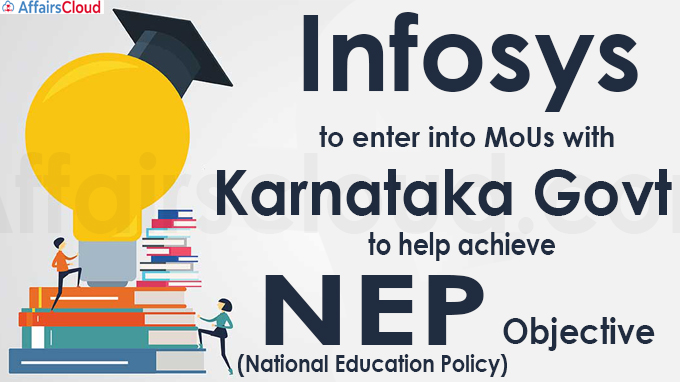 Karnataka’s Department of Higher Education and the Information Technology (IT) major will collaborate and sign three memorandums of understanding (MoUs) with Infosys for prioritising skill development among students as per National Education Policy (NEP-2020).