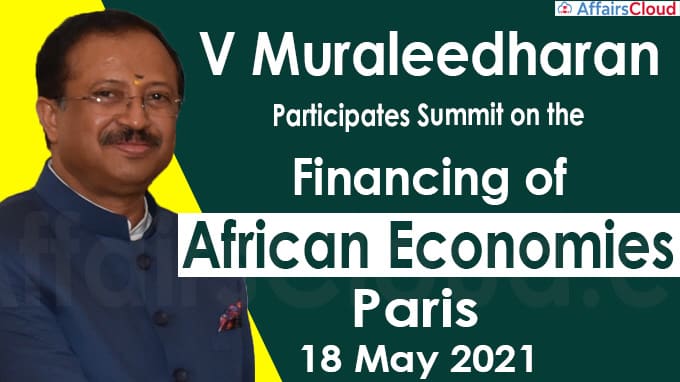 Minister of State for External Affairs V Muraleedharan virtually represented India at the Summit on Financing of African Economies 2021 held at Paris, France on May 18, 2021. The event was held in a hybrid format (mix of in-person meetings & Video conferences) and was hosted by France. 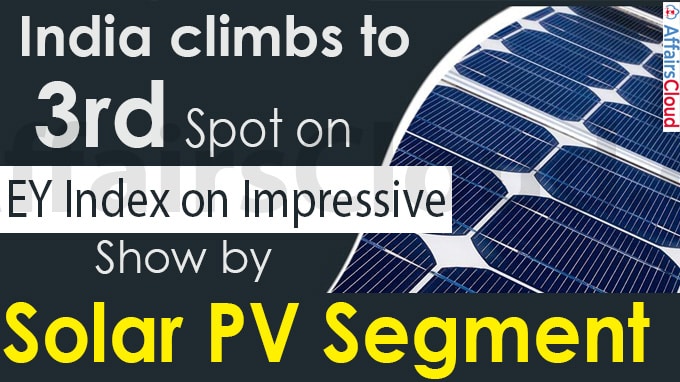 India with a score of 66.2 has been ranked 3rd out of 40 countries in the 57th Renewable Energy Country Attractiveness Index (RECAI) – May 2021 – released by Ernst & Young Global Ltd (EY). The United States (US) topped the index, while China took the 2nd Rank.

Around 55 Million People Internally Displaced Worldwide at the end of 2020: IDMC Report IDP in India
i.India has the highest levels of displacement due to Disaster in South Asia and Global level.

The Knight Frank, London based International Property Consultant has released the Prime Global Cities Index Q1 2021, a valuation based on the prime residential prices in the local currency across more than 45 cities across the globe. 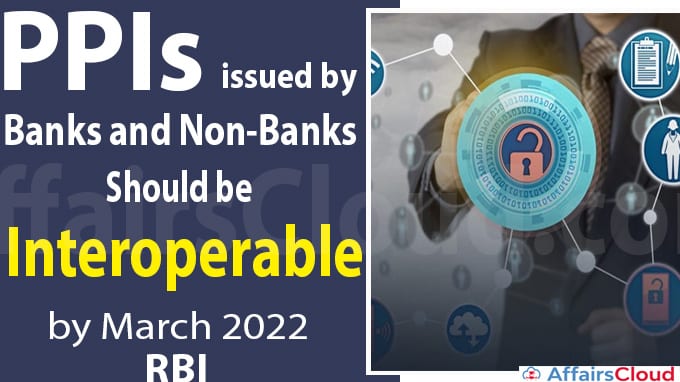 On May 19, 2021, Under Section 18 read with Section 10(2) of the Payment and Settlement Systems Act, 2007, The Reserve Bank of India (RBI) has mandated that all prepaid payment instruments (PPIs) or mobile wallets such as Paytm, PhonePe and Mobikwik that are fully KYC-compliant be made interoperable by March 31, 2022.
Background:
Under the Bi-monthly monetary policy in April 2021, to incentivise the migration of PPIs to full-KYC, the RBI proposed the following measures.

About RBI’s Regulations over PPIs in brief:
i.Mandating Interoperability:
RBI made it mandatory for PPI issuers to give the holders of full-KYC PPIs (KYC-compliant PPIs) interoperability through authorised card networks (for PPIs in the form of cards) and Unified Payments Interface (UPI) (for PPIs in the form of electronic wallets). Interoperability on the acceptance side also became mandatory.
ii.Increasing the Limit to ₹2 lakhs for Full-KYC PPIs
The maximum amount outstanding in full-KYC PPIs (KYC-compliant PPIs) has been increased from Rs 1 lakh to Rs 2 lakh by RBI.
iii.Permitting Cash Withdrawal from Full-KYC PPIs of Non-Bank PPI Issuers
RBI permitted Cash withdrawal from full-KYC PPIs issued by non-bank PPI issuers with a Maximum limit of Rs 2,000 per transaction with an overall limit of Rs 10,000 per month per PPI.
Note – Currently, the cash withdrawal is allowed only for full-KYC PPIs issued by banks, such as debit and credit cards. Now with these new measures, even a payments wallet or a prepaid card can be used to withdraw cash at ATMs, micro-ATMs and eligible Point of Sale (PoS) terminals.
About Prepaid Payment Instruments (PPIs):
PPIs are payment instruments that facilitate the purchase of goods and services, including financial services, remittance facilities, etc., against the value stored on such instruments.
PPIs are classified into 3 types such as, 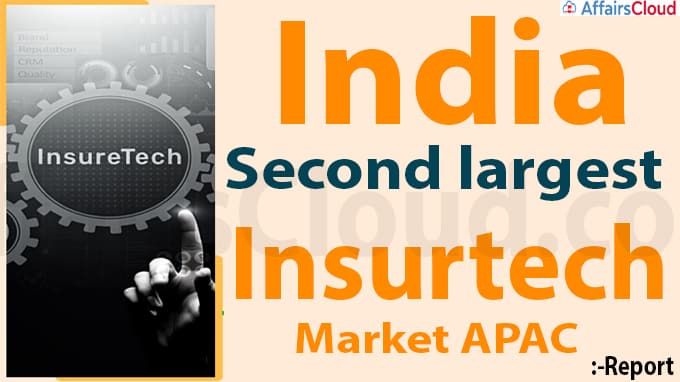 S&P Global Market Intelligence reported India as the 2nd largest insurance-technology (insurtech) market in Asia-Pacific(AP) region after China, as it accounts for 35 percent/$1.28 billion of the total venture capital ($3.66 billion) poured into the insurtech sector in the AP region so far.
About the S&P Global’s report:
i.Around 335 private insurtechs are operating in AP, in which 122 of them disclose fundraise, amounting to a total of USD 3.66 billion. Almost half of them are headquartered in India and China and have collectively attracted about 78 percent of the total investment.
ii.The report stated India as the world’s 3rd largest startup ecosystem, as it has at least 66 insurtech startups.
iii.Insurance premiums in India for the FY20, summed up to $107 billion, after growing at a compounded annual growth rate (CAGR) of 10 percent between FY15 and FY20.
About S&P Global:
Headquarters– New York, United States.
President and CEO – Douglas L. Peterson
>>Read Full News 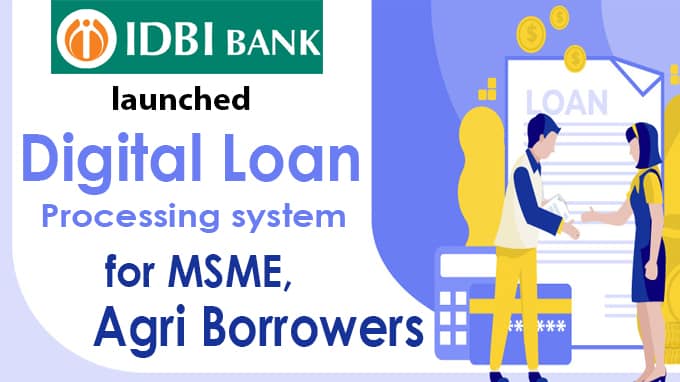 Report on SSE by SEBI’s TG: Not Allowed Political, religious firms for SSE 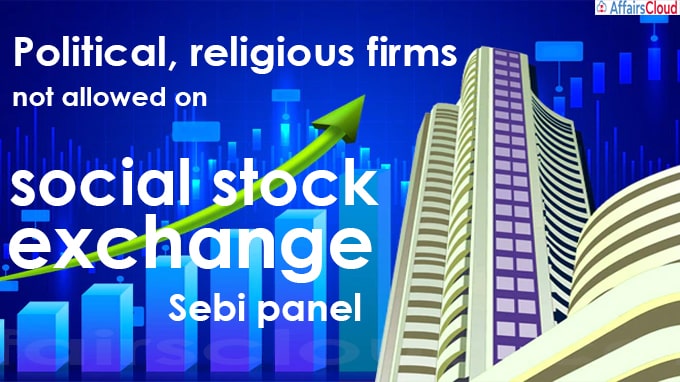 A technical group(TG) under the chairmanship of Harsh Bhanwala on Social Stock Exchanges (SSEs), constituted by the Securities and Exchange Board of India (SEBI), has recommended not to allow the political and religious organizations, trade organizations, corporate foundations, infrastructure and housing companies (except affordable housing) to raise funds using SSE mechanism.
Background:
i.SEBI had constituted a TG on SSE in September 2020 under the chairmanship of Harsh Bhanwala, former chairman of NABARD.
ii.The TG made recommendations relating to – permitting participation of Social Enterprises on SSE, minimum reporting requirements, possible means/ mechanisms of raising finance etc.
Note – Before this, a Working Group (WG) on the SSE, chaired by Ishaat Hussain, submitted its report in June 2020.
Recommendations of the TG over SSE:
i.The TG suggested to allow the Non-Profit Organization(NPO) and For-Profit Social Enterprise (FPE) that is having social intent and impact as their primary goal as the Social Enterprises (SE) to participate in SSE.
Eligibility for the SE:

ii.TG recommended different modes of fundraising for NPOs and FPE:

iii.TG included a list of eligible activities that SE can engage in, such as eradicating hunger, poverty malnutrition and inequality, promoting gender equality by empowering women, etc.

v.The SVP will fall under category-I Alternative Investment Fund (AIF) and will allow 100 per cent grants-in and grants-out.

vi.The TG has recommended that the capacity building fund for SSE should have a corpus of Rs 100 crore. This fund should be housed under Nabard.

About SSE:
i.SSE is a platform for listing social enterprise, voluntary and welfare organisations to raise capital.
ii.Social enterprise(SE) could be a non-loss, non-dividend paying company created and designed to address a social problem. 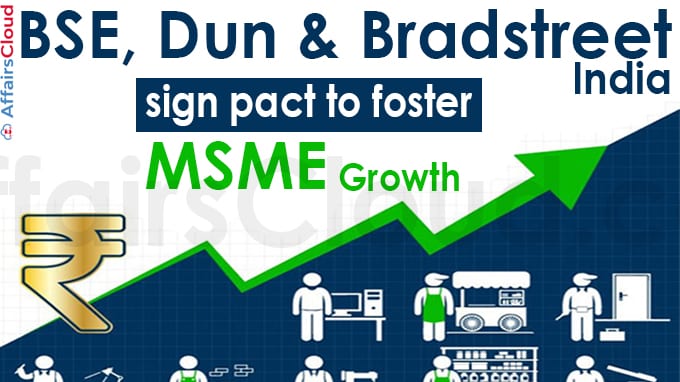 Leading stock exchange Bombay Stock Exchange(BSE) has signed a memorandum of understanding (MoU) with Dun & Bradstreet Information Services India to create an ecosystem for promoting, aiding and fostering the growth of Small and Medium Enterprises(SME).
Objective:
i.To accelerate SME growth.
ii.To help the government in achieving the GDP contribution target of 50% of GDP by FY 2025.
Key points:
i.This partnership will help SMEs in India to 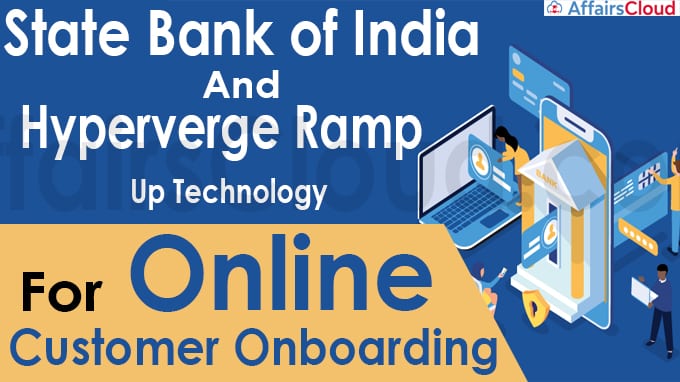 State Bank of India(SBI) made a partnership with HyperVerge to obtain its technology called ‘Video KYC solution’ for onboarding customers online under COVID-19.

Maharashtra’s Priyadarshini Mahila Nagari Sahakari Bank was imposed Rs 1 lakh penalty by the Reserve Bank of India (RBI) for violation of certain directions under the Supervisory Action Framework.
The penalty has been imposed in exercise of powers vested in RBI under the provisions of Section 47 A (1) (c) read with Section 46 (4) (i) and Section 56 of the Banking Regulation Act, 1949, taking into account the failure of the bank to adhere to the aforesaid directions issued by RBI.

In May 2021, The National Basketball Association (NBA) announced an award named after the former American basketball player – Kareem Abdul-Jabbar called the Kareem Abdul-Jabbar Social Justice Champion Award to recognise players who are making strides in the fight for social justice.
i.Each NBA team are set to nominate one player for the award and from there, 5 finalists will be selected and finally one winner will be rewarded by the social justice award bearing Abdul-Jabbar’s name.
iiThe winner will receive $100,000 for the charity of his choice and the other four finalists will receive $25,000 apiece, also for charity. 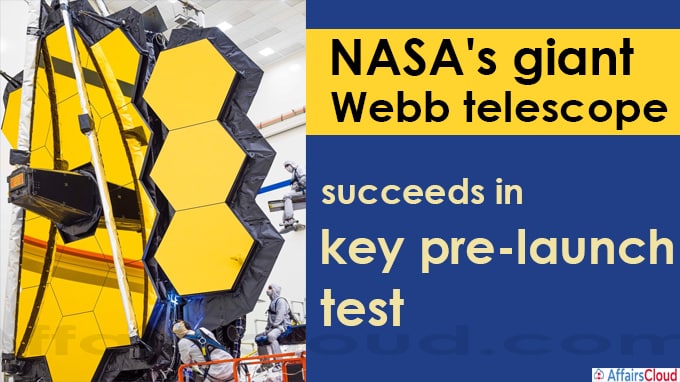 The world’s largest and most powerful space science telescope, James Webb Space Telescope, Successfully Completed its Pre-Launch Test by opening its iconic primary mirror for the last time it is on earth.
In the Final Test,the 6.5 meter mirror was commanded to fully expand and lock itself into place, to ensure that it will survive its million-mile (1.6 million kilometer) journey and is ready to discover the origins of the Universe.
Key Points:
i.The telescope has to be fitted within a five-meter launch vehicle so it is designed to be folded in ‘origami-style’.
ii.After this test, all of the telescope’s movable parts will have confirmed in testing that they can perform their intended operations after being exposed to the expected launch environment.
iii.A proper deployment in space is considered critically important to the process of fine-tuning Webb’s individual mirrors into one functional and massive reflector.
iv.The testing of each actuator and their expected movements was completed in a final functional test earlier this year. i.BEML is a multi-technology schedule ‘A’ company under the Ministry of Defence Iran has launched its most powerful supercomputer Simorgh, named after the mythical Phoenix-like bird Simorgh or Simurgh. The system was designed by the Amirkabir University of Technology (AUT) at a cost of 1 trillion Iranian rials (around Rs 173 crore).
The system is located at the Iranian High-Performance Computing Research Center (IHPCRC) at AUT.
About Simorgh:
i.The system will be used for the artificial intelligence workloads, traffic and weather data, and image processing, state media claimed.
ii.The system currently has a processing power of 0.56 petaflops.
iii.The installation of Simorgh spans around 42 racks, providing 560 teraflops.
iv.It is to reach 1 petaflops in two months. In its subsequent levels it is to reach to speed of 10 petaflops. It comprises of 42 racks in an area of 250 square metres. In future this is to be upgraded to 400 square metres.
Note:
A next-generation supercomputer “Maryam” – named after Iranian mathematician and scientist Maryam Mirzakhani, is being developed in Iran.
About Iran:
Prime Minister– Mustafa al-Kadhemi
Capital– Tehran
Currency– Iranian Rial

Barbora Strycova, a 35-year old tennis player from Czech Republic announced retirement from Tennis. She has won 2 WTA singles titles and 31 doubles titles. The famous doubles player also won a Bronze Medal in the 2016 Rio Olympics. At the peak of her career, she was ranked WTA World No.1 in Doubles and World No. 16 in Singles. 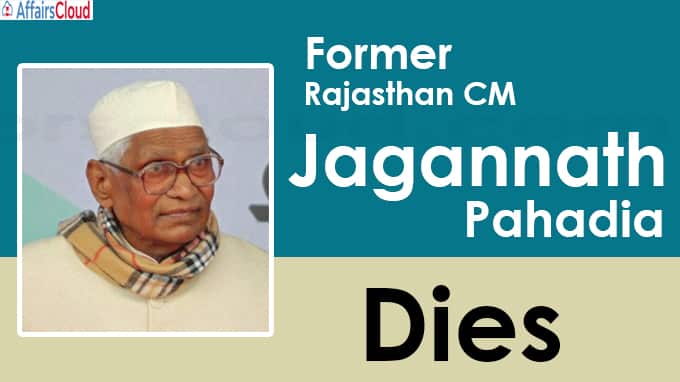 Veteran Congress leader and Rajya Sabha Member, Rajeev Shankarrao Satav passed away in Pune, Maharashtra.He was born in Pune, Maharashtra.Currently he served as the member of the Parliament of Rajya Sabha. He earlier served as the member of Parliament of Lok Sabha from 2014 –2019. He was in the Parliamentary Standing Committee on Defence  & Consultative Committee for the Ministry of Civil Aviation. 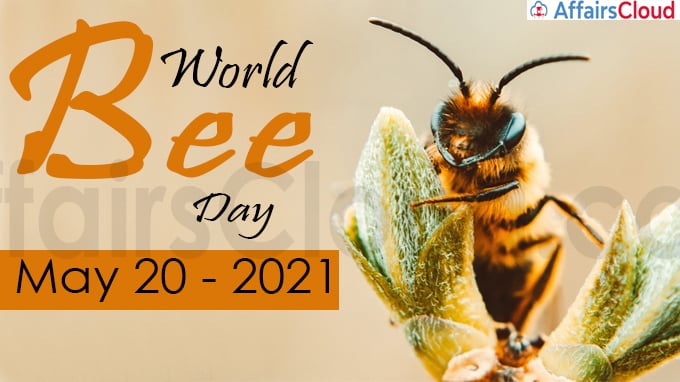 United Nations(UN)’s World Bee Day is annually observed across the globe on 20th May to create awareness on the importance of bees and other pollinators and the threats faced by them and highlights their contribution towards sustainable development.
20th May 2021 marks the observance of the 4th World Bee Day.

Background:
i.The United Nations General Assembly(UNGA) adopted the resolution A/RES/72/211 on 20th December 2017 and proclaimed the 20th May of every year as the World Bee Day.
ii.The first World Bee Day was observed on 20th May 2018.
>>Read Full News 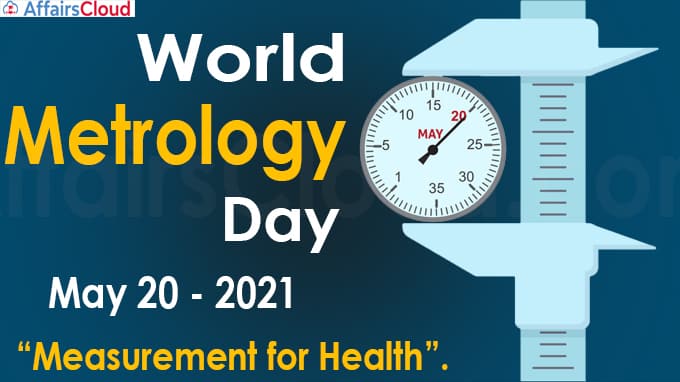 World Metrology Day (WMD) is annually observed across the globe on 20th May to celebrate the International system of Unit. The day marks the annual celebration of the signing of the Metre Convention on 20 May 1875 in Paris, France by 17 nations.

Aim:
To create awareness about the role of metrology and its advancement in the respective fields.
>>Read Full News

Maharashtra Allocates 50 Acres of Land in Sindhudurg to Establish NIMP The Cabinet of Maharashtra chaired by Uddhav Thackeray, Chief Minister(CM) of Maharashtra approved the proposal to allocate 50 Acres of land in the district of Sindhudurg to establish the National Institute of Medicinal Plants (NIMP).