We are here for you to provide the important Recent and Latest Current Affairs 17 & 18 January 2021, which have unique updates of Latest Current Affairs 2021 events from all newspapers such as The Hindu, The Economic Times, PIB, Times of India, PTI, Indian Express, Business Standard and all Government official websites. Reason behind Merging:
The reason behind the merger is strengthening the institutes, like ”One plus one equaling to ELEVEN and not two”, with a VISION to become a globally respected Think Tank as a Resource Centre for understanding Science, Technology & Innovation (STI) Policy Research and Communication.
About CSIR-NISCAIR:
It has published popular science magazines (Vigyan Pragati and Science Reporter) and Scientific Journals while managing the largest and oldest National Science Library and also distributes International Standard Serial Number (ISSN).

About CSIR-NISTADS:
It has experience of Policy research in the area of History of Science, S & T and Society, and S&T and Innovation. It has created a Techno-Socio-Economic platform to enable development and application of socially acceptable, relevant, scalable and cost-competitive products.
About Council of Scientific and Industrial Research (CSIR):
Director General – Dr. Shekhar C. Mande
Headquarter– New Delhi
Parent Ministry– Ministry of Science & Technology i.The 146th Foundation Day of India Meteorological Department (IMD) was held on January 15, 2021 in New Delhi. It was attended by Dr. Harsh Vardhan, Minister of Science & Technology, Earth Sciences and Health & Family Welfare along with other officials. Dr. Harsh Vardhan inaugurated Doppler Weather Radars at Mukteshwar (Uttarakhand) and Kufri (Himachal Pradesh).Doppler Weather Radars in Uttarakhand is 1st of its kind.
Key Highlights of Occasion:
To mark this occasion, the minister inaugurated/released the following: Indian Army has signed USD 20 Million (~ INR 140 Crores) contract with ideaForge to procure unmentioned numbers of high-altitude  variant of Indigenous SWITCH UAV (Unmanned Aerial Vehicle) over a period of 1 year.
i.SWITCH is a Fixed-Wing-Vertical Take-off and Landing (VTOL) UAV and is capable of being deployed at high altitude and harsh environments. 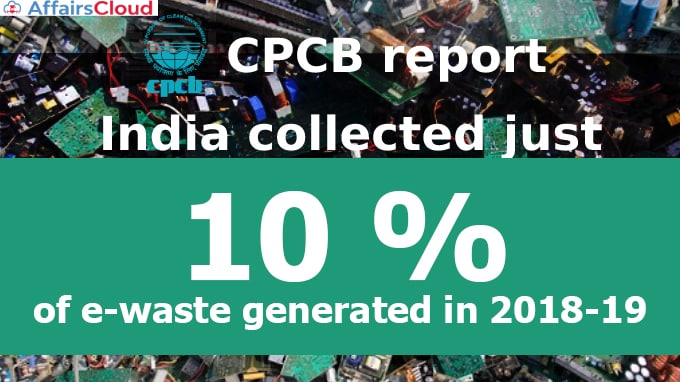 According to a report by the Central Pollution Control Board (CPCB), India generated 771, 215 tonnes of Electronic waste (e-waste) in 2018-19, of which only 10% were collected. The Garden Reach Shipbuilders and Engineers (GRSE) Ltd, Kolkata has signed USD  12.7 Million Contract with the Harbour Department, Ministry of Public Works, Government of Guyana for the construction of an Ocean-going vessel.
i.The move is expected to boost the export initiatives of GRSE.

GRSE:
GRSE is a shipbuilding company in India which is under the administrative control of the Ministry of Defence (MoD) and was awarded the Miniratna status by Government of India in 2006. 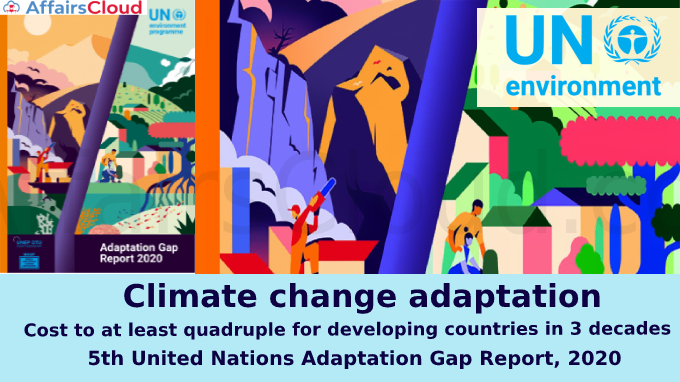 i.On January 14, 2021, the 5th edition of United Nations Environment Programme’s (UNEP) Adaptation Gap Report 2020 was launched during a high-level online press event. The report was produced by UNEP in collaboration with UNEP DTU Partnership (UDP) and the World Adaptation Science Programme (WASP).
ii.In accordance with the report the actions required by the Paris Agreement are lagging behind. Though nations have successes in planning and implementation, there is a huge gap faced by developing countries, especially in Africa and Asia, in financing these planning.
iii.Notably, the annual cost of adaptation to the effects of climate change for developing countries is estimated to at least quadruple by 2050.
About United Nations Environment Programme (UNEP):
Executive Director of UNEP – Inger Andersen
Headquarters– Nairobi, Kenya
<<Read Full News>> According to the  ‘International Migration 2020-Highlights’ report released by the United Nations Department of Economic and Social Affairs (UN DESA), In 2020, 18 Million persons from India were living outside of their country of birth thus making it the World’s Largest Transnational Community. India is followed by Mexico & Russia (11 Million each), China (10 Million) & the Syrian Arab Republic (8 Million).
i.The United Arab Emirates (3.5 Million), the United States of America (2.7 Million) and Saudi Arabia (2.5 Million) host the largest numbers of migrants from India.
ii.At the Global level, the number of International Migrants living outside their country of birth reached 281 Million in 2020.   International Migrants represent about 3.6% of the World’s population.
iii.The Growth of International Migration has slowed by 27% or 2 Million due to COVID-19.
iv.Europe hosted the largest number of International Migrants in 2020 :  ~ 87 Million.
Click here to read the Full report
About United Nations Department of Economic and Social Affairs (UN DESA):
Under Secretary General – Liu Zhenmin
Headquarters – New York, USA
<<Read Full News>> Sandeep Aggarwal Appointed as the New Chairman of TEPC Sandeep Aggarwal, the Managing Director (MD) and Promoter of Paramount Communications Limited, has been elected as the new chairman of Telecom Equipment and Services Export Promotion Council(TEPC). He will take over from Shyamal Ghosh, former Telecom Secretary.

About TEPC:
i.TEPC was established by the Government of India to promote and develop the export of Telecom Equipment and services.
ii.The TEPC supports the complete telecom ecosystem including the telecom hardware manufacturing, telecom service provision, telecom software and consultancy.
Chairman– Sandeep Aggarwal
Headquarters- New Delhi

On 15th January 2021, Dr. Harsh Vardhan, Union Minister of Science and Technology, Earth Sciences and Health and Family Welfare dedicated the National Innovation Portal(NIP) to the Nation at an event in New Delhi. The portal was developed by the National Innovation Foundation(NIF) – India, an autonomous body of the Department of Science and Technology(DST), Government of India.
About the Portal:
i.The innovation portal can be easily accessed by the citizens to know more about the technologies which are available in the database.
ii..NIF will provide more information about the technologies which interest the people.
iii.The portal is onboarded at an appropriate time within the innovation ecosystem of India by way of coinciding with evolution of 5th National Science Technology & Innovation (STI) Policy of India.
Features:
i.Currently the portal houses around 1.15 lakh innovations scouted from common people of the nations.
ii.The innovations under the portal cover Engineering, Agriculture, Veterinary and Human Health.
iii.The innovations under the portal belong to domain areas like Energy, mechanical, automobile, electrical, electronics, household, chemical, civil, textiles, Farm / cultivation practice, storage practice, plant variety, plant protection, poultry, livestock management, nutraceuticals.
Benefits:
i.The innovation portal will support the institution with the new ideas of the common people towards the solution for the local problems.
ii.The portal will create an ecosystem for the institutions to support the ideas and innovations into entrepreneurship.
NIF will ensure the original innovator to be the part of the commercial exploitation of the innovation at large scale.
iii.The portal will support to create local entrepreneurs out of the grassroot ideas and help them to market the ideas.
iv.The portal will act as a resource for students, entrepreneurs, MSME’s, Technology Business Incubators(TBI’s) and people who are engaged in different occupations.
About National Innovation Foundation(NIF):
Chairperson– Dr. P. S. Goel
Headquarters– Gujarat
Established in– March 2000 On 15th January 2021, Kamal Morarka, Former Union Minister and a renowned businessman and industrialist, passed away at the age of 74 in Mumbai, Maharashtra. He was born on 18th June 1946 in Nawalgarh, Rajasthan.
About Kamal Morarka:
Political career:
i.Kamal Morarka served as the Union Minister of State in the prime minister’s office in the Chandra Shekhar government from 1990 to 1991.
ii.He has also served as a member of Rajya Sabha(1988 to 1994) from Rajasthan representing Janata Dal.
iii.He became the President of the Samajwadi Janata Party (Rashtriya) in 2012.
Highlights:
i.He has served as vice-president of the Board of Control for Cricket in India (BCCI) and Vice President of Rajasthan Cricket Association.
ii.For more than 20 year the MR Morarka Foundation, established by Kamal Morarka in 1993 has organised the annual Shekhawati festival in Nawalgarh. 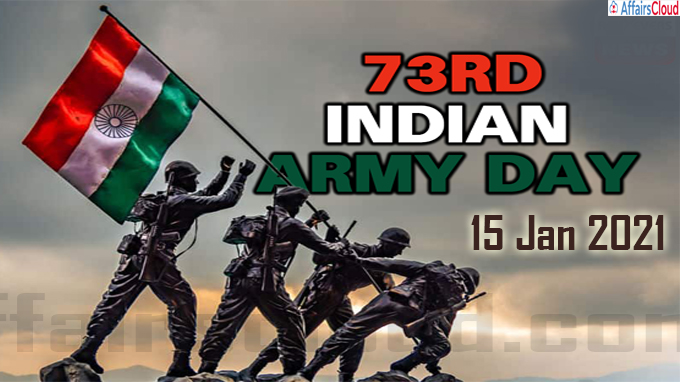 i.Indian Army annually celebrates the Army Day on 15th January to honour the contribution and sacrifices of the Indian Soldiers who lost their lives in the line of duty towards the nation.
ii.The 15th January 2021 marks the celebration of the 73rd Army Day by the Indian Army.
iii.On 15th January 1949, Lieutenant General KM Cariappa was appointed as the first Indian Commander in Chief of the Indian Army who took over from General Sir Francis Butcher, the last British Commander-in-Chief of India.
iv.The soldiers of the Indian Army showcased the done swarming capabilities using 75 indigenously designed and developed drones and executed an array of Artificial Intelligence(AI )enabled simulated offensive missions.
v.To commemorate the 73rd Army Day, Bharti AXA Life Insurance has launched its campaign “Weather it like Indian Army”, dedicated to the personnels of Indian Armed Forces.
<<Read Full News>>