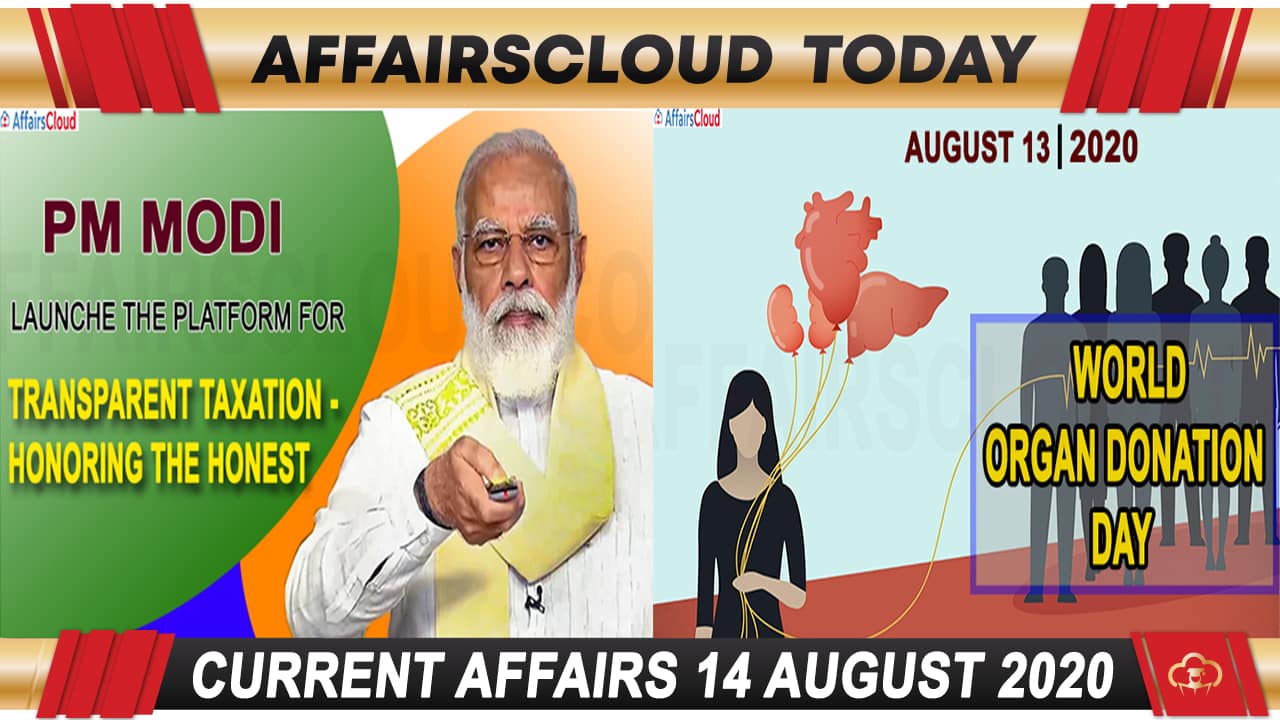 We are here for you to provide the important Recent and Latest Current Affairs 14 August 2020, which have unique updates of Latest Current Affairs 2020 events from all newspapers such as The Hindu, The Economic Times, PIB, Times of India, PTI, Indian Express, Business Standard and all Government official websites. 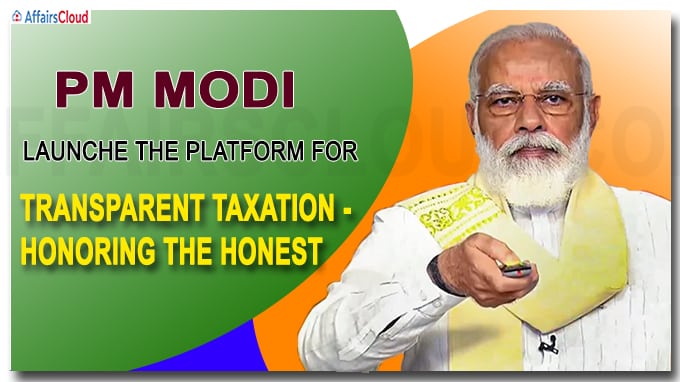 i.On August 13, 2020, Prime Minister Narendra Modi launched a platform for “Transparent Taxation – Honoring the Honest” via video conferencing that provides faceless assessment and appeal and taxpayers’ charter, as a part of direct tax reforms.
ii.While the faceless assessment and taxpayers’ charter would be implemented from August 13 itself but the faceless appeal system would be available from September 25, 2020 i.e. on the birth anniversary of Deendayal Upadhyaya.
About Central Board of Direct Taxes:
Chairperson– Pramod Chandra Mody
<<Read Full News>> 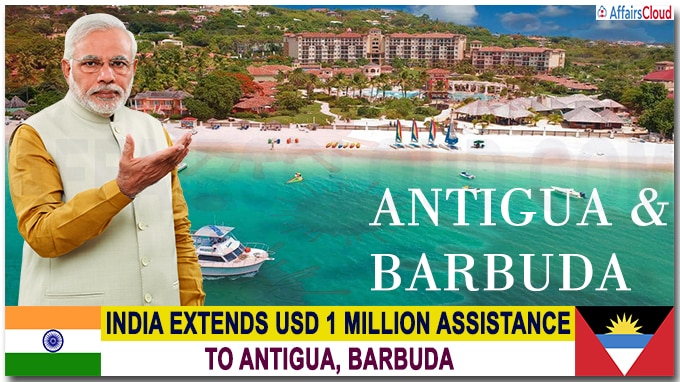 i.As a part of India’s efforts to contain the spread of COVID-19, India extended an assistance of 1 million USD to the government of Antigua and Barbuda to combat the global COVID-19 pandemic and to improve their health infrastructure and capacity.
ii.On 7th August 2020, under the 1 million USD assistance, KJ Srinivasa, Indian High Commission in Guyana handed over the medical supplies, equipment and medicine to Gaston Browne, Prime Minister of Antigua and Barbuda over a virtual platform.
About Antigua and Barbuda:
Governor General– Sir Rodney Williams
Prime Minister– Gaston Browne
Capital– Saint John’s
Currency– East Caribbean dollar
<<Read Full News>> 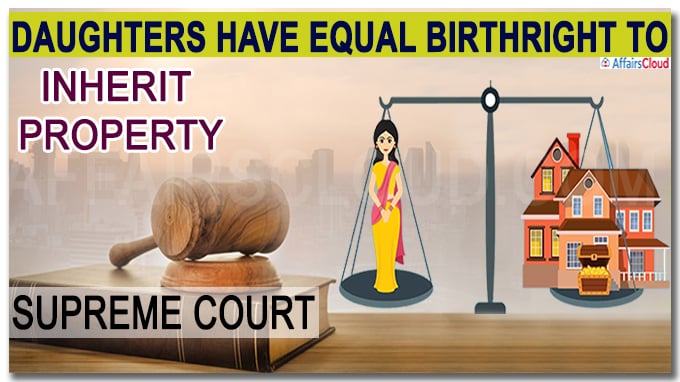 i.In accordance with the landmark judgment passed by three-judge Bench of Supreme Court (SC) headed by Justice Arun Mishra and comprised of Justices S Abdul Nazeer and Mukeshkumar Rasikbhai Shah, the daughters will have equal inheritance rights as of sons in the properties of fathers, grandfathers and great-grandfathers right from the codification of the law in 1956 i.e. it would have retrospective effect.
ii.The 121 page verdict has made it clear that whether the father was alive or not before September 9, 2005 daughters could claim equal right in inheritance.
iii.A retrospective law is one that is to take effect, in point of time, before it was passed.
About Supreme Court:
Chief Justice of India (CJI)– Sharad Arvind Bobde
Location– New Delhi
<<Read Full News>> 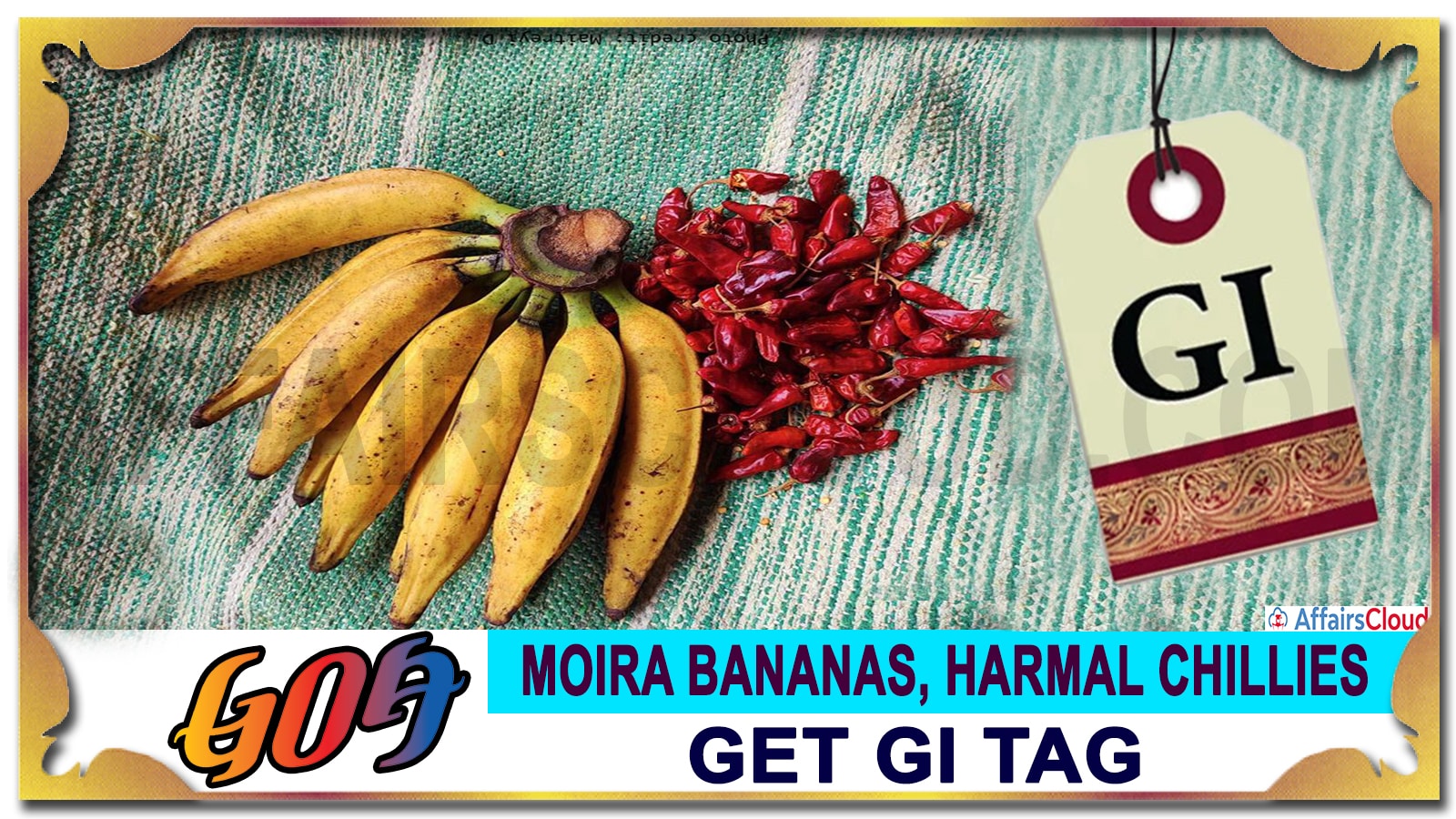 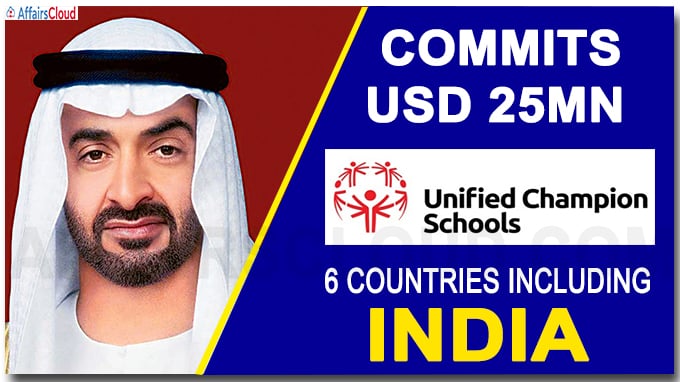 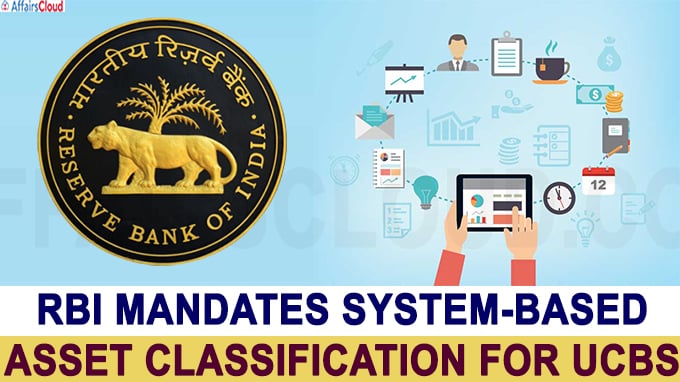 i.On August 12, 2020, the Reserve Bank of India (RBI) has mandated the urban co-operative banks (UCBs) with assets of Rs 2,000 crore or above as on March 31, 2020 to implement system-based asset classification from 30 June 2021.
ii.For UCBs having total assets of Rs 1000 crore or above but less than Rs 2000 crore as on March 31, 2020 and have self-assessed under Level III or Level IV on “Comprehensive Cyber Security Framework for Primary (Urban) Cooperative Banks (UCBs) – A Graded Approach” are mandated to implement it from September 30, 2021.
iii.This decision has been taken to improve the efficiency, transparency and integrity of the asset classification process.
About Reserve Bank of India (RBI):
Headquarters– Mumbai, Maharashtra
Formation– 1 April 1935
Governor– Shaktikanta Das
Deputy Governors– 4 (Bibhu Prasad Kanungo, Mahesh Kumar Jain, Michael Debabrata Patra, one is yet to be appointed).
<<Read Full News>> i.On August 11, 2020, the first consignment of 40 mm Under Barrel Grenade Launcher (UBGL) was handed over to Border Security Force (BSF) which is designed and manufactured indigenously by the Ammunition Factory Khadki (AFK) in Pune, Maharashtra on the lines of the “Atmanirbhar Bharat” (self-reliant India).
ii.The consignment was flagged off by Hari Mohan, Chairman, Ordnance Factory Board (OFB), and Manoj Kumar Mohapatra, Senior General Manager (GM).
iii.This ammunition is fired from a launcher fitted under the barrel of a 5.56 mm Rifle INSAS (Indian Small Arms System).
About Ordnance Factory Board (OFB):
Ordnance Factories is the oldest and largest industrial setup under the Department of Defence Production (DPP) of the Ministry of Defence (MoD).  There are 41 Ordnance Factories under the aegis of its corporate headquarters in Kolkata, West Bengal.
<<Read Full News>> 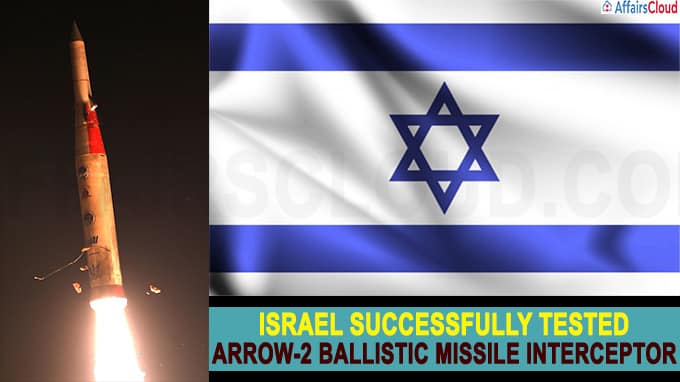 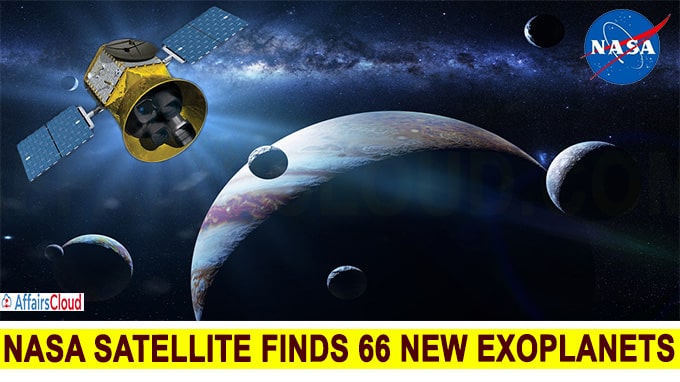 i.On 4th July 2020, the Transiting Exoplanet Survey Satellite(TESS) of National Aeronautics and Space Administration(NASA) completed its primary mission of imaging 75% of the starry sky during the two-year survey and found 66 new exoplanets beyond the solar system, and around 2100 candidates on which the astronomers are working on to confirm among others.
ii.The NASA Astrophysics Explorer mission led and operated by Massachusetts Institute of Technology(MIT), Cambridge, Massachusetts.
About NASA:
Administrator– James Frederick Bridenstine or “Jim” Bridenstine
Headquarters– Washington, United States of America
<<Read Full News>>

As part of Israel-India cooperation to fight the ongoing Covid-19 Pandemic, Israel has shared Artificial Intelligence (AI) based technology and high-end equipment with All India Institute of Medical Science (AIIMS), Delhi, India.
Ambassador of Israel to India Dr Ron Malka handed over the ‘state-of-the-art artificial intelligence-based technologies and high-end equipment’ to Director of AIIMS Dr Randeep Guleria in the presence of Sanjay Bhattacharya, Secretary, (Consular and Diaspora) Ministry of External Affairs at an event held on August 12, 2020.
Key Highlights:
i.The shared Artificial Intelligence(AI) based technology and high-end equipment consists of  AI video-oriented, voice-operated autonomous personal AI assistant robot to assist the hospital staff.
ii.An application that can be installed on the mobile of COVID-19 staff, to make the work of hospital staff inside  COVID-19 departments easier and effective.
iii.An innovative product designed to give the clinicians contact-free access to  patient’s vitals like heart rate and respiratory rate .
iv.A 12-hour disinfectant product called Continuous Protection Disinfection technology(CPD), which will stay active to protect the surface against new attacks of contamination.
v.Non-invasive remote patient monitoring system that will work as preliminary screening tool for respiratory indicators of suspected and recovering patients.
vi.An AI based software for Ultrasound use which has been designed for fighting COVID-19.
About Israel:
Capital – Jerusalem
Prime Minister – Benjamin Netanyahu
Currency – Israeli Shekel 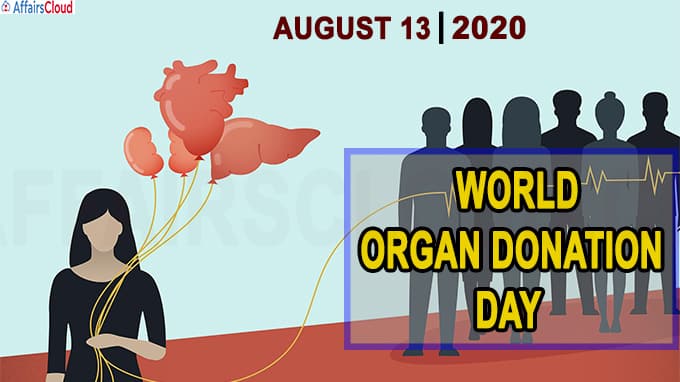 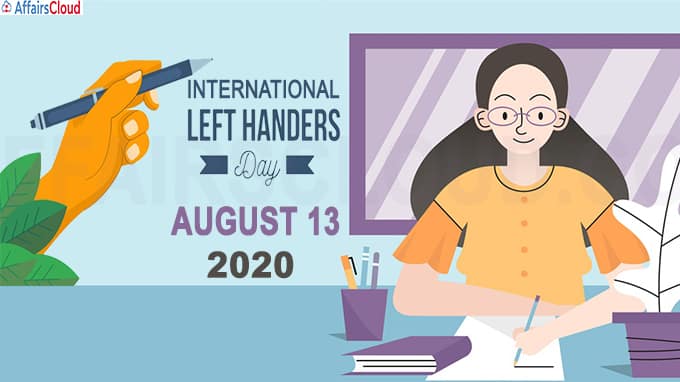 The World Left-Handers-Day is observed every year on August 13 to celebrate the uniqueness and differences of Southpaws. Around 10 percent of the people worldwide are left-handed.
History:
i.It was first observed in 1976 by Dean R. Campbell who was founder of the Lefthanders International Inc.,
Objective:
i.It is being created to celebrate sinistrality(the trait of the left side being more stronger than the right) and to raise awareness of the advantages and disadvantages faced by the lefties in the world dominated by right-handers.
ii.The day aims to spread awareness on issues faced by left-handers like emphasizing the importance of the special needs for left-handed children, and the likelihood for left-handers to develop schizophrenia. 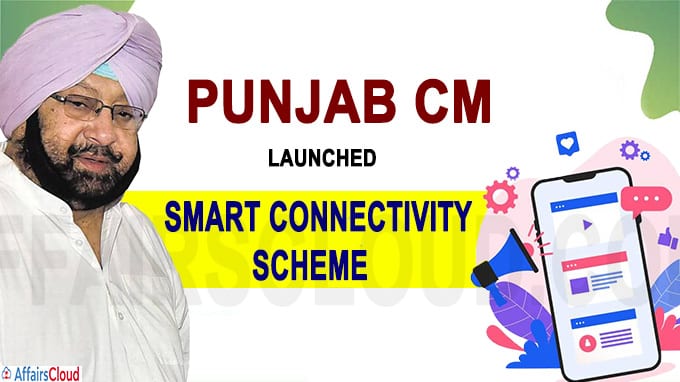 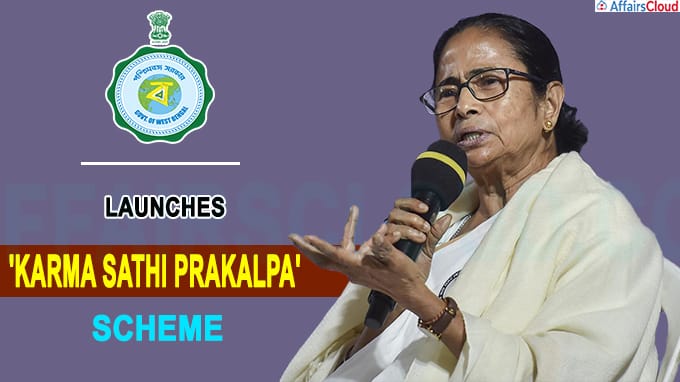 On the occasion of International Youth Day 2020, the West Bengal government launched the ‘Karma Sathi Prakalpa’ scheme under which 1 lakh unemployed youth will be provided soft loans and subsidies so as to make them self-reliant. This scheme empowers the youth.
Other Scheme launched by West Bengal
The West Bengal (WB) Government (govt) launched ‘Matir Smristi’ scheme to utilise 50,000 acres of barren land in 6 districts for income-generating activities like horticulture and pisciculture involving the locals.
Recent Related News:
i.The West Bengal (WB) state Home Secretary, Alapan Bandopadhyay announced that the WB Government (govt) launched an “exit app” for people of other states who are stranded in the state due to the lockdown and want to return to their native place.
ii.West Bengal Chief Minister Mamata Banerjee launched Karmo Bhumi, a job portal to help Information Technology(IT) professionals who have lost their jobs after the outbreak of COVID-19 and returned to the state. The portal will enable them to get employment in the state.
About West Bengal:
Chief Minister– Mamata Banerjee
Governor– Shri Jagdeep Dhankhar
National Park(NP)– Sundarbans NP, Singalila NP, Neora Valley NP, Jaldapara NP, Gorumara NP, Buxa NP

Benefits:
i.The scheme benefits around 23 lakh women of age group 45-60 belonging to the minority community like SC, ST, BC.
ii.The women are given complete freedom on how to spend their annual amount of Rs.18750, without any restrictions.
Note:
The annual expenditure by the government for this scheme is around Rs. 4,687 crore.
Eligibility:
i.Women who attain the age of 45 as on August 12 are eligible to receive the benefits under the scheme.
ii.Women who are currently enrolled under the scheme and have crossed the age of 60 will cease to receive the benefits of this scheme and will move to the Pension Kanuka, based on eligibility.
Recente Related News:
i.The Government of Andhra Pradesh signed a MoU with AMUL (Anand Milk Union Limited) to empower women self- help groups(SHG) and to encourage the cooperatives in government sectors.
ii.Andhra Pradesh CM YS JaganMohan Reddy launched the Nadu-Nedu scheme (roughly meaning then and now in Telugu) at STBC ground, Kurnool, AP. An amount of Rs 15,337 crore has been allocated to modernise all government hospitals in 3 years.
About Andhra Pradesh:
River- Vamsadhara river (in Andhra Pradesh and Odisha)
Dams:
i.Srisailam Dam over Krishna River
ii.Nagarjuna Sagar Dam over Krishna River i.On 12th August, 2020, the State Cabinet of Odisha approved a proposal  which will enhance the  penalty for violators of the COVID-19 regulations.
The State Cabinet has approved the proposals to effect necessary amendments in the Epidemic Diseases Act 1897, in its application to the state of Odisha, by passing an Ordinance.
ii.An Ordinance has been promulgated since the state assembly is not in  session.
About Odisha:
Chief Minister – Naveen Patnaik
Governor – Ganeshi Lal
Capital – Bhubaneswar
UNESCO Heritage Sites in Odisha – Bhitarkanika Conservation Area, Sun Temple (Konark), Chilika Lake, Ekamra Kshetra.
<<Read Full News>>

Patriots’ day is observed annually on August 13 in Manipur. The Patriots’ Day 2020 was observed to commemorate the 1891 Anglo-Manipuri war during which many Manipuris sacrificed their lives to safeguard the independence of the State.
Patriots’ Day 2020
i.On this day in 1891, Manipuris including the then Prince of Manipur Bir Tikendrajit and Thangal General were hanged before the general public in the present Imphal area. ii.Prabhat Phery was held in the streets of Imphal City, as part of the observance.
iii.The day was observed without involving the general public due to COVID-19 pandemic.
About Manipur
National Parks– Keibul Lamjao National Park, Sirohi National Park
Nickname– Jewel of India
Chief Minister– Nongthombam(N.) Biren Singh

Union Minister for Road Transport and Highways and Micro, Small and Medium Enterprises Nitin Gadkari has unveiled  a microwave device named ‘Atulya’ that can disinfect any premises in just 30 seconds, disintegrating COVID-19 virus in Nagpur,Maharashtra and  is developed by the Defence Institute of Advanced Technology, Pune.

Centre has announced  24 winners in the eight categories of “AatmaNirbhar App Innovation Challenge”,under this Challenge, Chingari emerged as a winner of ‘social’ category and  Koo, MaymyIndiamove, Asksarkar, myitreturn are some of the other apps that won the challenge, across eight categories.Click here to Know more 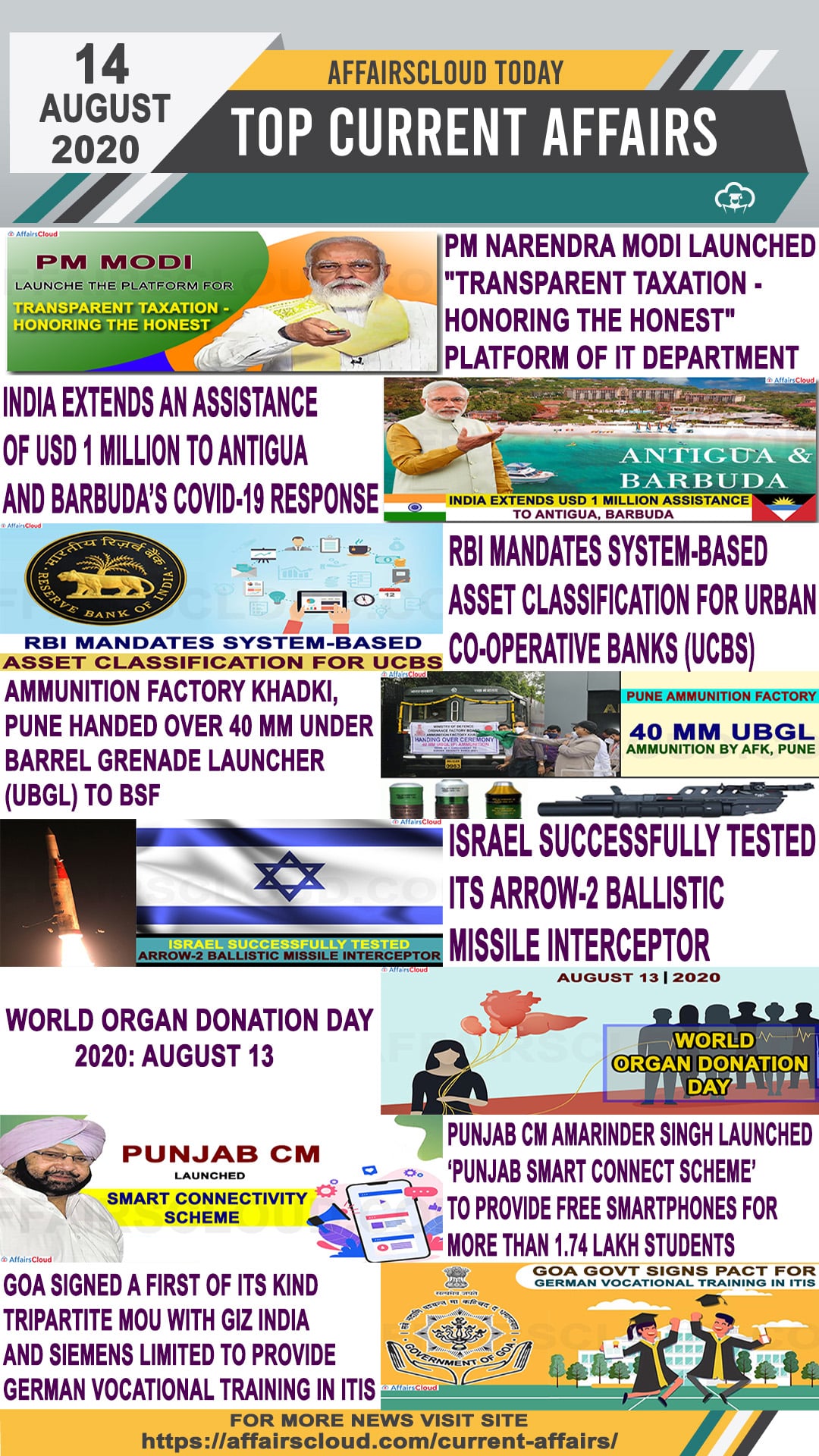