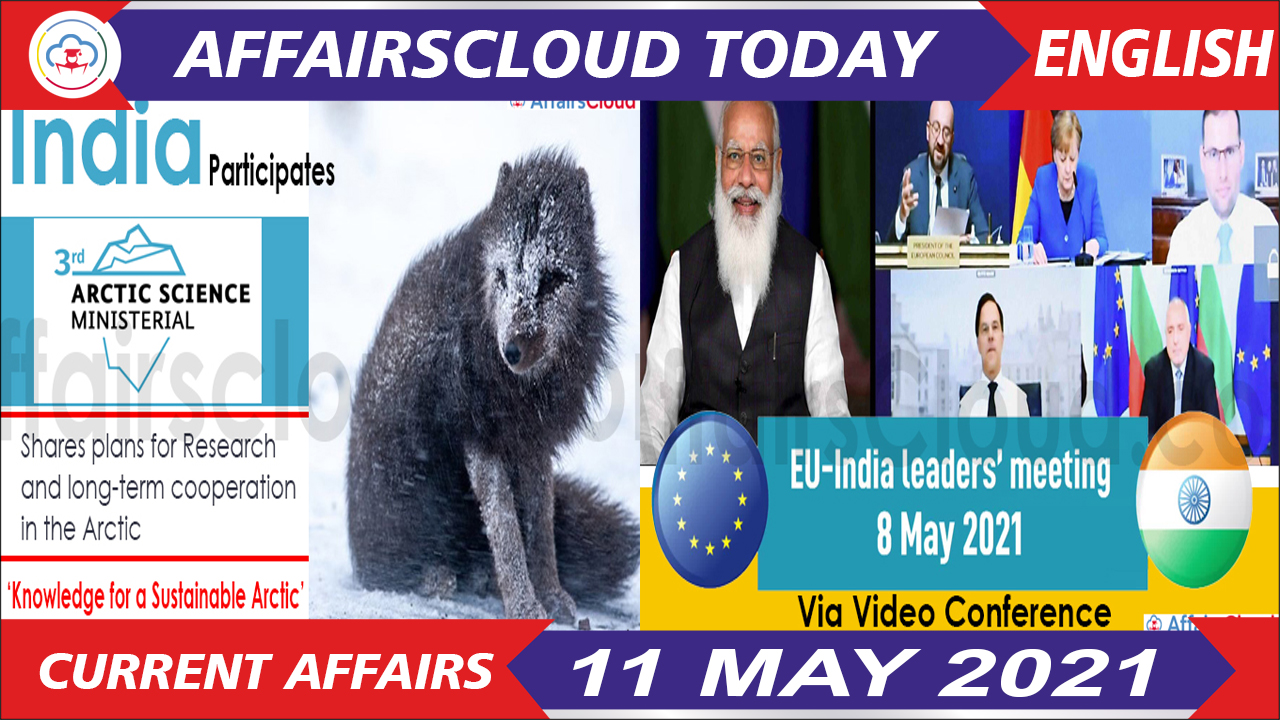 We are here for you to provide the important Recent and Latest Current Affairs 11 May 2021, which have unique updates of Latest Current Affairs 2021 events from all newspapers such as The Hindu, The Economic Times, PIB, Times of India, PTI, Indian Express, Business Standard and all Government official websites. The Indian and Indonesian Navies conducted Passage Exercise (PASSEX) in the Southern Arabian sea. The main aim of the exercise was to improve interoperability and understanding between the Navy units of two countries.
i.From the Indian Navy, INS Sharda, an Offshore Patrol Vessel (OPV) with a Chetak helicopter participated in the exercise.
ii.From the Indonesian Navy, KRI Sultan Hasanudin, a 90m Corvette took part in the exercise.
iii.An Passage Exercise is usually conducted by 2 navies,  to make sure that the navies are able to communicate and cooperate in times of war or humanitarian relief.
Fact Union Minister for Earth Science Dr Harsh Vardhan virtually represented India in the 3rd Arctic Science Ministerial (ASM3) 2021 held in Tokyo, Japan from May 8-9, 2021, it was jointly organized by Iceland & Japan.  The ASM3 2021 is the 1st meeting to be held in Asia.

Arctic Council
i.It addresses issues faced by Arctic governments and the indigenous people of the Arctic. It was established in 1996.

Indian Prime Minister (PM) Narendra Modi virtually participated in the India-European Union (EU) Leaders Meeting 2021 which was held in a hybrid format on 8th May 2021 in Porto, Portugal. It is the 1st time that the EU has hosted a meeting with India in the EU+27 format.
i.Host –   Prime Minister of Portugal, Mr Antonio Costa  (Portugal holds the Presidency of the Council of EU for the year 2021).
ii.India participated in the meeting virtually, while the Leaders of the 27 EU Member States met in person in Porto-Portugal.
iii.During the meeting, the two sides

Portugal opened the Pedestrian suspension bridge named ‘516 Arouca’ in Northern Portugal. The 516-meter long bridge is built in the Arouca Geopark, which is suspended at 175 metres above the Paiva River.
The bridge was built by the Institute for Research and Technological Development for Construction, Energy, Environment and Sustainability as a tourist attraction for the Arouca region.

About ‘516 Arouca’:
i.The walkway is made up of 127 interlocking metal cages.
ii.The structure of the concrete towers is an inverted A-shape marks the landing points of the bridge and supports two steel suspension cables (tensile cables) that support the steel walkway.
Additional info:
The 526.14-metre-long Glass-bottom bridge in China, which was completed in 2020, is the world longest glass-bottom bridge.

HDFC BANK in Partnership With CSC Launched a ChatBot, ‘EVA’ for VLEs On May 10, 2021, HDFC Bank and Common Services Centers (CSCs) announced the launch of a chatbot called ‘Eva’ on CSC’s Digital Seva Portal to support Village Level Entrepreneurs (VLEs).
Objective: To provide banking services to last-mile rural consumers.
Uses of Chatbot – Eva:
i.Under Eva, the VLEs could become a Business Correspondent (BC) by getting access to the training content and taking a quiz before getting the certification.
ii.VLEs could learn about HDFC Bank’s products and services, account opening, and loan in Eva.
iii.Around 1,27,348 VLEs were currently providing HDFC Bank’s products and services in semi-urban and rural India.
About HDFC Bank:
Establishment – 1994
Headquarters– Mumbai, Maharashtra
MD & CEO – Sashidhar Jagdishan
Tagline– We understand your world
>>Read Full News 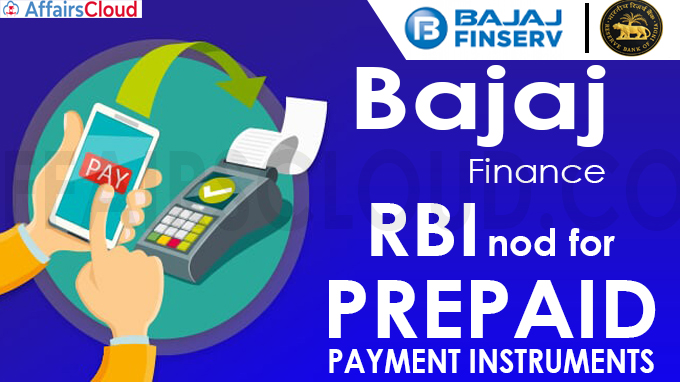 Bajaj Finance got authorization from the Reserve Bank of India (RBI) for the issuance and operation of semi-closed Prepaid Payment Instruments(PPIs) with perpetual validity.

About Prepaid Payment Instruments(PPI):
What is PPI?
PPIs are instruments that facilitate the purchase of goods and services, including financial services, remittances, funds transfers, etc., against the value stored in/on such instruments.
Who can issue PPI?
Companies that are incorporated and registered under the Companies Act, 1956 / Companies Act, 2013 in India can issue and operate PPIs after receiving authorisation from RBI.
Types of PPIs:
There are 3 types of PPIs – Closed System PPIs, Semi-closed System PPIs, and Open System PPIs
About Semi-closed System PPIs:
i.These are PPIs issued by banks (approved by RBI) and non-banks (authorised by RBI) for the purchase of goods and services, including financial services, remittance facilities, etc. These instruments do not permit cash withdrawal, irrespective of whether they are issued by banks or non-banks.
ii.3 Types of Semi-Closed System PPIs: In the “2021 Ranking of Global retail powerhouses” by Deloitte, millionaire Mukesh Ambani’s Reliance Retail Ltd has been ranked the 2nd fastest-growing retailer in the world, which is 1 rank down from its 2020 rank (In 2020 it was ranked 1st).
Note – South Korea’s Coupang is the World’s 1st Fastest-Growing Retailers.
List of Global Powers:

About Reliance Retail Ltd:
i.In FY20, it recorded a 41.8 percent Year-on-Year (YoY) growth which was driven primarily by a 13.1 percent increase in the number of stores in its consumer electronics, fashion and lifestyle and grocery retail chains, to 11,784 stores.
ii.Reliance Retail is partnering with WhatsApp to further accelerate Reliance Retail’s digital commerce business on the JioMart platform using WhatsApp and to support small businesses on WhatsApp.
About Deloitte:
Headquarters – London, United Kingdom
Global Chief Executive Officer – Punit Renjen
About Reliance RetailLtd:
It is a subsidiary of Reliance Industries Limited
Establishment – 2006
Headquarters – Mumbai, Maharashtra
Founder – Mukesh Ambani 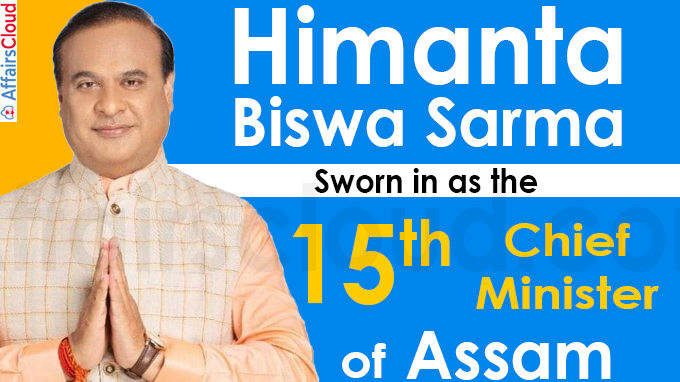 On May 10, 2021,Himanta Biswa Sarma was sworn in as the 15th  Chief Minister of Assam. He has replaced Sarbananda Sonowal. Both the candidates are from BJP(Bharatiya Janata Party). 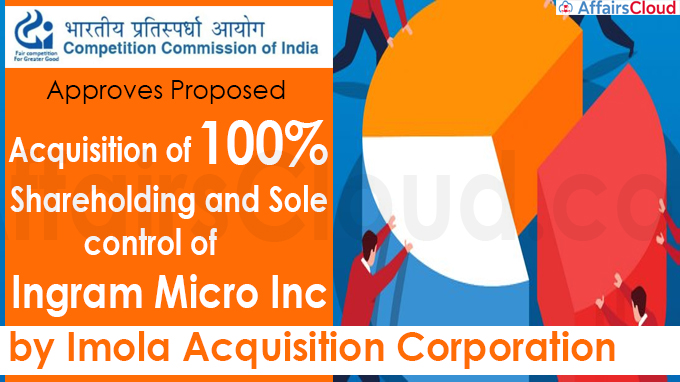 A team of botanists led by Manju C Nair discovered a new species of bryophyte in the Malabar Wildlife sanctuary along the Western Ghats in Kerala. The new species is named “Bryocrumia malabarica” of the genus Bryocrumia, and is named after the Malabar region where it was spotted.

About Bryocrumia malabarica:
i.Bryocrumia malabarica has closely arranged leaves with distinct tricostate, ovate rounded to truncate leaves and an inconspicuous central strand in the stem cross-section.
ii.The structure of its leaves differentiates it from Bryocrumia vivicolor.
iii.It is found on the rocky patches along the stream in the Malabar wildlife sanctuary.
iv.The species was first collected in 2014 as a part of the PhD programme of Prajitha on the taxonomy of Bryophytes of the Malabar Wildlife Sanctuary.
Member of the research team.
The team of botanists led by Manju C.Nair, Zamorin’s Guruvayurappan College, Kozhikode consists of, 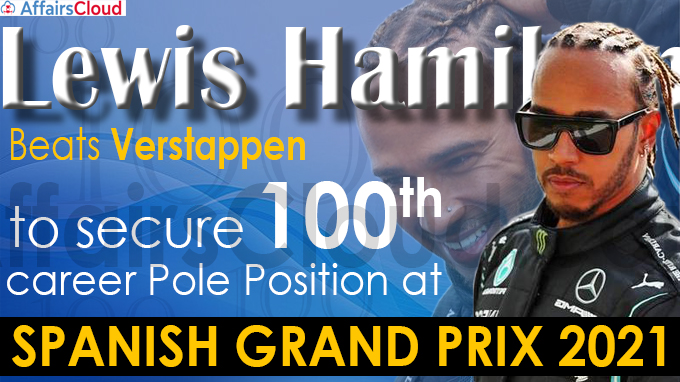 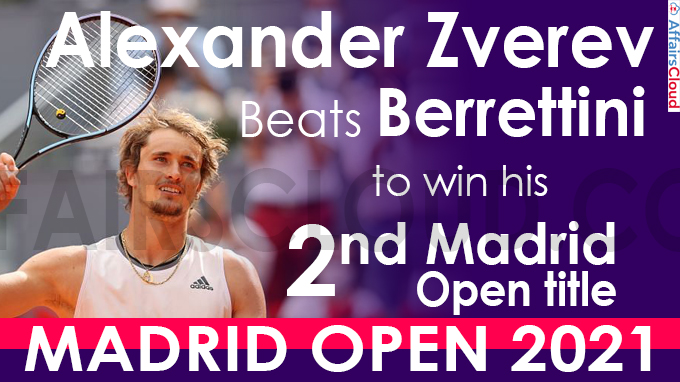 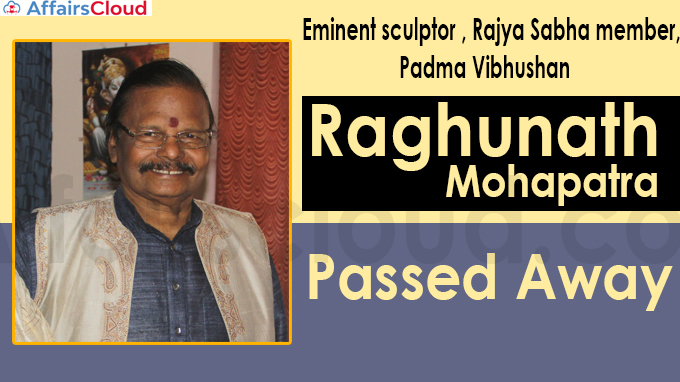 Eminent sculptor , Rajya Sabha member and  Padma Awardee Raghunath Mohapatra passed away due to covid-19 in Bhubaneshwar, Odisha.He was born on 24th March 1943 in Puri,Odisha.
About Raghunath Mohapatra:
i.In 2018,Raghunath Mohapatra was nominated by President Ram Nath Kovind as the first person from Odisha to the Rajya Sabha.
ii.He was awarded India’s second highest civilian award Padma Vibhushan in 2013 for his contribution to the field of stone sculpture.
iii.He had also won Padma Bhushan award in 2001 and Padma Shri award in 1976 for his contribution to the field of stone sculpture.
iv.At the age of 22 he had won the National award for Sculpture in 1964
v.He was also nominated by the Ministry of External Affairs, Government of India as a Member of the Indian Council for Cultural Relations (ICCR) in 2000. Former India hockey player and coach Maharaj Krishan Kaushik(M K Kaushik) passed away at the age of 66 after battling COVID-19 in New Delhi.He was born on 2nd May 1955.He was the member of the Indian Hockey team that won the Gold medal in 1980 Olympics held in Moscow,Russia
About MK Kaushik:
i.MK Kaushik was awarded the Arjuna Award in 1998 for his role as a sportsman and the Dronacharya award in 2002 for his contribution as a coach.
ii.He had coached both the senior men and women’s teams. Under his coaching, India men’s team won a gold medal at the 1998 Asian Games in Bangkok.
iii.Also, Indian women’s team had won a bronze medal at the Doha Asian Games in 2006 under his coaching.
iv.Apart from sports,he also wrote the book The Golden Boot.
v.He was also involved in the development of the 2007 Bollywood film Chak De India which was based on Hockey On May 10, 2021, Former India international footballer, Fortunato Franco, passed away in Goa. He was a part of the 1962 Asian Games gold medal-winning football team in Jakarta. He was born in 1937 in Goa. 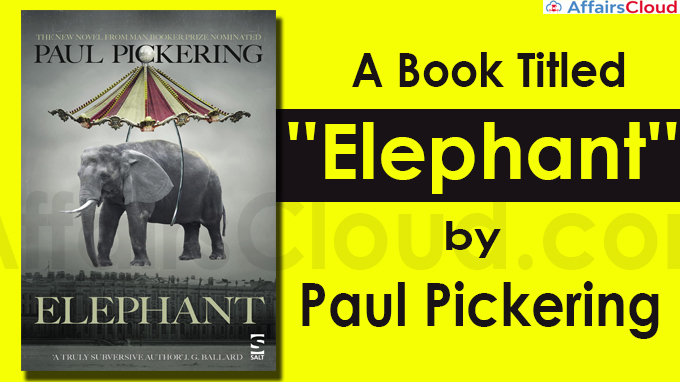 The British Novelist Paul Pickering has authored a new book titled “Elephant”.The book is to be published by Salt Publishing.

About the Author
i.Paul Pickering is the author of six novels, Wild about Harry, Perfect English, The Blue Gate of Babylon, Charlie Peace, The Leopard’s Wife and Over the Rainbow.
ii.The Blue Gate of Babylon was a New York Times notable book of the year.
iii.Often compared to Graham Greene and Evelyn Waugh, Pickering was chosen as one of the top ten young British novelists by bookseller WH Smith and has been long-listed for the Booker Prize three times.
iv.Apart from short stories and poetry, he has also written several plays, film scripts and columns for The Times and Sunday Times. Delhi-based Kashmiri journalist Shakoor Rather has authored his debut novel titled “Life in the Clock Tower Valley”. The novel travels between the past, present and future of Kashmir. The book was published by Speaking Tiger Books.
About the book:
i.The Book provides an insider’s view of everyday life and emotions in Kashmir valley through various love stories.
ii.The book focuses on the emotions and hardships of the common people of Kashmir and the conflicts and military presence in the region.
iii.The book also features historical and political information about Kashmir along with its environmental issues. 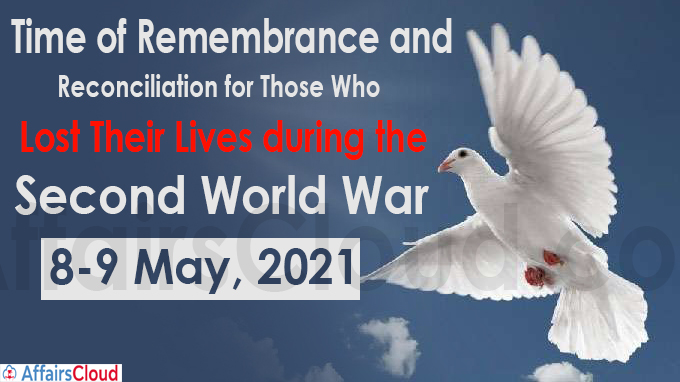 The United Nations(UN) annually mark May 8th-9th as the Time of Remembrance and Reconciliation for Those Who Lost Their Lives during the Second World War to create awareness about the misfortune of war and to pay tribute to all the victims of World War II(WWII).

Background:
The United Nations General assembly adopted the resolution A/RES/59/26 on 22nd November 2004 and declared the 8-9 May as the time of remembrance and reconciliation for Those Who Lost Their Lives during the Second World War.
>>Read Full News 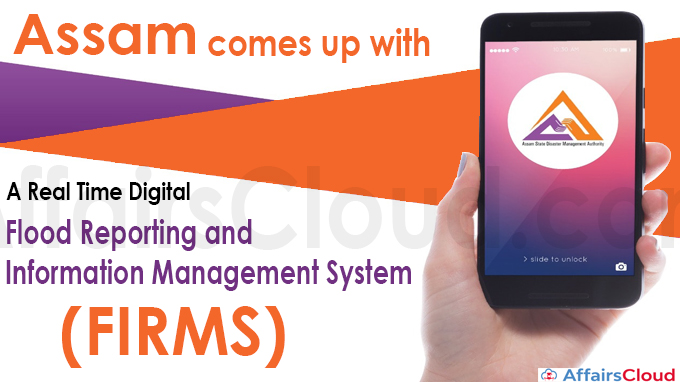 Features of FRIMS:
i.It will replace the state’s existing manual flood control mechanism with the web cum mobile application-based technology-driven system, which will report online about floods daily from May 15, 2021. (Assam has a mandatory system of daily flood reporting between May 15 to October 15, 2021)
ii.This real-time flood reporting will address the data need for addressing the immediate needs of vulnerable groups (like children and women) in addition based on this the govt will also provide financial assistance for restoration.
iii.UNICEF India Chief, Emergency and Disaster Risk Reduction (DRR), Tom White complemented the Government of Assam for such an initiative
About United Nations Children’s Fund(UNICEF):
Executive Director – Henrietta Holsman Fore
Headquarter – New York, USA
>>Read Full News