We are here for you to provide the important Recent and Latest Current Affairs 11 February 2021, which have unique updates of Latest Current Affairs 2021 events from all newspapers such as The Hindu, The Economic Times, PIB, Times of India, PTI, Indian Express, Business Standard and all Government official websites. 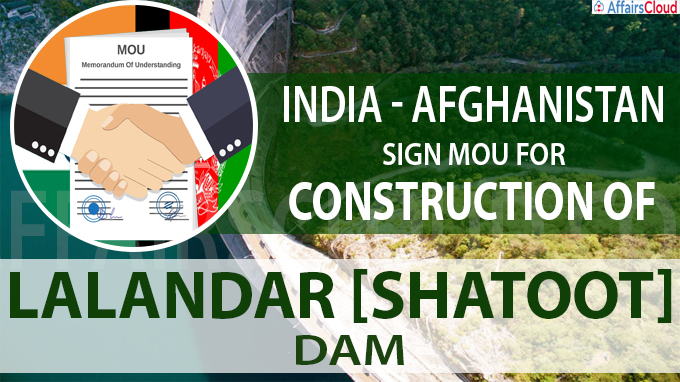 i.On February 9, 2021, the Central Government has laid the foundation of 2nd dam i.e. Lalandar [Shatoot] Dam, to be built by India in Afghanistan, by signing the virtual Memorandum of Understanding (MoU) between both nations. It will be constructed on the Kabul river basin which is one of the five river basins of Afghanistan.
ii.It was signed by Union Minister Dr. Subrahmanyam Jaishankar, Ministry of External Affairs (MEA), India and Foreign Minister of Afghanistan, Mohammad Haneef Atmar in the presence of Prime Minister of India, Narendra Modi and President of Afghanistan Dr. Mohammad Ashraf Ghani.
iii.This project is partially funded by India and is a part of Indo-Afghan New Development Partnership.
About Afghanistan:
Capital– Kabul
Currency– Afghan afghani
<<Read Full News>>

IEPF Authority signs MoU with IGNOU for Telecast of IAP Government of India allocates Rs. 16000 crore for PMFBY for FY22 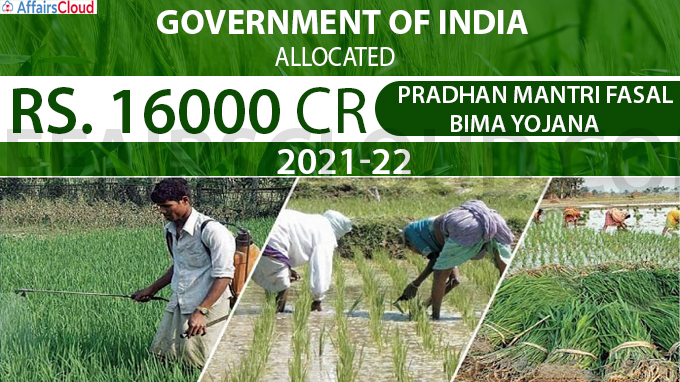 i.On February 7, 2021, the Central Government has allocated Rs 16000 crores for Pradhan Mantri Fasal Bima Yojana (PMFBY) for FY22, an increase of around Rs 305 crore as compared to FY21.
The reason behind an increase in the amount is to boost the safety of farmers’ crops and ensure maximum benefit of crop insurance.
ii.Notably, the scheme covers the entire cropping cycle from pre-sowing to post-harvest which include loss coverage due to prevented sowing and mid-season adversities.
About Ministry of Agriculture and Farmers Welfare (MoAFW):
Union Minister– Narendra Singh Tomar (Constituency- Morena, Madhya Pradesh)
Minister of State– Parshottam Khodabhai Rupala, Kailash Choudhary
<<Read Full News>> i.In accordance with the International Energy Agency’s (IEA) “India Energy Outlook 2021”, India will surpass European Union as the world’s third-biggest energy consumer by 2030. In this regard, India energy demand growth share will be maximum at 25% in the next two decades.
ii.As per India’s current national policy scenario, its gross domestic product (GDP) expands to an estimated $8.6 trillion by 2040 thereby the energy consumption is expected to be nearly doubled.
iii.Also, there is a need to spend an additional $1.4 trillion by India to adopt clean energy technologies over the next 20 years.
About International Energy Agency (IEA):
Executive Director – Dr Fatih Birol
Headquarters – Paris, France
Members Countries– 30 member countries and 8 association countries
<<Read Full News>> During the 34th Session of UN’s FAO (Food and Agriculture Organization) Committee on Fisheries (COFI 34) which took place virtually from February 1-5, 2021, members of the session supported the first-ever Declaration for Sustainable Fisheries & Aquaculture.

i.The report ‘The impact of COVID-19 on fisheries and aquaculture food systems Possible Responses’ released by FAO in November, 2020 was discussed during COFI 34 session. 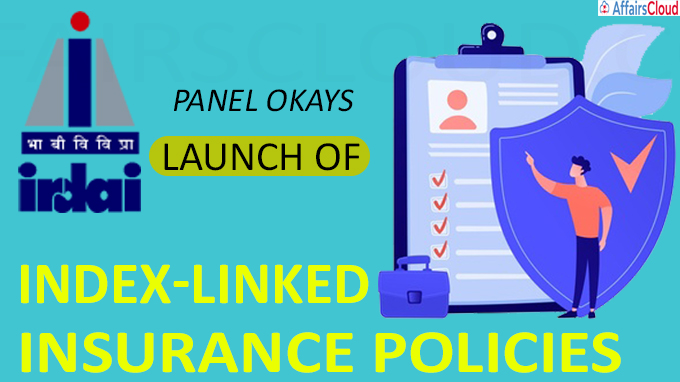 i.The Working Group Committee (WGC) set up by the Insurance Regulatory and Development Authority of India (IRDAI) has recommended the introduction of index-linked insurance policies (Ilips). The report is opened for comments till March 8, 2021.
ii.The committee has been formed in August 2020 under Dinesh Pant, Appointed Actuary of the Life Insurance Corporation (LIC) of India on the lines of the requests from insurers for reintroducing Ilips. It was banned by IRDAI in 2013.
iii.The committee was responsible to examining the need of index-linked products in India.
About Insurance Regulatory and Development Authority of India (IRDAI):
Chairman – Subhash Chandra Khuntia
Headquarters – Hyderabad, Telangana
<<Read Full News>>

i.National Payments Corporation of India (NPCI) launched a Global level Hackathon ‘NPCI PayAuth Challenge’, to find out the alternatives for the authentication of UPI (Unified Payments Interface) transaction for eg: Biometric. This Challenge is supported by APIX, world’s first cross-border, open architecture API marketplace and sandbox platform.
ii.The Challenge is an open for global Fintechs, solution providers and developers and can submit unique solutions that simplify authorization.
iii.UPI is a unique payment system through which customers can link their bank account to a mobile application and make easy, safe and instant money transfers.
About National Payments Corporation of India (NPCI):
It is an initiative of Reserve Bank of India (RBI) and Indian Banks’ Association (IBA) under the provisions of the Payment and Settlement Systems Act, 2007.
Establishment– 2008
Managing Director (MD) and Chief Executive Officer (CEO)– Dilip Asbe
Headquarter– Mumbai, Maharashtra
<<Read Full News>> Private sector lender HDFC Bank is inviting applications from start-ups and individual entrepreneurs for its SmartUp grants. SmartUp grants are a part of the bank’s Corporate Social Responsibility(CSR) i.On February 10, 2021 Ecowrap report of the State Bank of India (SBI) has estimated that India’s Gross domestic Product(GDP) for FY 21 will contract by 7%(-7%) from -7.4%  projected earlier.
ii.The GDP growth in FY22 will remain at 11%.
About SBI (State Bank of India):
Founded– July 1, 1955 as SBI
Headquarters– Mumbai, Maharashtra
Chairman– Dinesh Kumar Khara
Tagline– The banker to every Indian; With you all the way; Pure banking nothing else; The nation banks on us; A bank of the common man
<<Read Full News>> GAIL (India) Limited has acquired a 5% stake of Indian Energy Exchange Ltd (IEX) in Indian Gas Exchange Ltd (IGX). GAIL becomes the 3rd strategic investor in IGX after Adani Total Gas & Torrent Gas. With this disinvestment, IEX will hold 85% stake in IGX.
5% Equity Stake Acquisition by Adani Total Gas and Torrent Gas
Recently, Adani Total Gas and Torrent Gas acquired 5% stake each in IGX. This was the 1st time stakes of IGX were sold, as it was wholly-owned by the Indian Energy Exchange (IEX). The total 10% stake has been sold for about Rs 7.38 crore
About IGX:
Launched: On June 15, 2020 by Dharmendra Pradhan Union minister of Petroleum and Natural Gas.
Operates under: The regulatory framework of Petroleum and Natural Gas Regulatory Board (PNGRB).
Firsts: 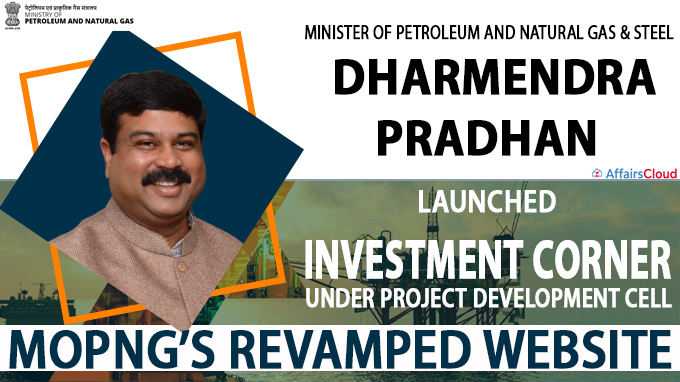 On February 5, 2021, Square Kilometre Array Observatory (SKAO) Council held its Maiden Meeting during the meeting they approved the establishment of World’s Largest Radio Telescope namely ‘Square Kilometre Array’. The telescope will consist of a vast number of radio receivers which will be positioned in South Africa and Australia. SKAO is a 10-member intergovernmental organisation dedicated to radio astronomy. The members of SKAO are Australia, Canada, China, India, Italy, New Zealand, South Africa, Sweden, Netherlands and UK. The headquarters of SKAO is situated at the University of Manchester’s Jodrell Bank Observatory in Cheshire, United Kingdom. Radio Telescopes are capable of detecting gas and can reveal areas of space which are hidden by cosmic dust. On 9th February 2021, Bollywood Actor, Director and film producer Rajiv Kapoor passed away at the age of 58 in Chembur, Mumbai, Maharashtra. He was the son of veteran filmmaker Raj Kapoor and brother of Rishi Kapoor and Randhir Kapoor. He was born on 25th August 1962 in Mumbai, Maharashtra. Rajiv Kapoor is also known as “Chimpu”.
Rajiv Kapoor:
i.Rajiv Kapoor made his debut as an actor in the film “Ek Jaan Hain Hum” in 1983.
ii.His well known works include, Aasman (1984), Lover Boy (1985) and Zabardast (1985).
iii.Ram Teri Ganga Maili the 1985 film directed by Raj Kapoor is one of his most credited movies.
iv.He has produced the well known films like “Aa Ab Laut Chalen” and “Henna” and he directed the movie “Prem Granth” in 1996. Meghna Pant has authored a new book titled ‘The Terrible, Horrible, Very Bad Good News’. The book will be published by Penguin Random House India. It will be released  in April 2021, and will shortly become a major motion picture under the title Badnam Ladoo.

Essence of the Book:
The book is about  Ladoo, a small-town woman who offends her conservative family when she decides to use a sperm donor to have a baby, while continuing to look for Mr Right.
About Meghna Pant:
i.Apart from being an author, she is a journalist and speaker.
ii.Her 2nd non-fiction book titled ‘How To Get Published in India’ (Bloomsbury, 2019) is India’s first and only guide to publishing in India.
iii.The other works of the author include  Happy Birthday (Random House, 2013),  Feminist Rani (Penguin Random House, 2018).
Awards
Her debut novel, One & a Half Wife (Westland, 2012) won the national Muse India Young Writer Award (2014). 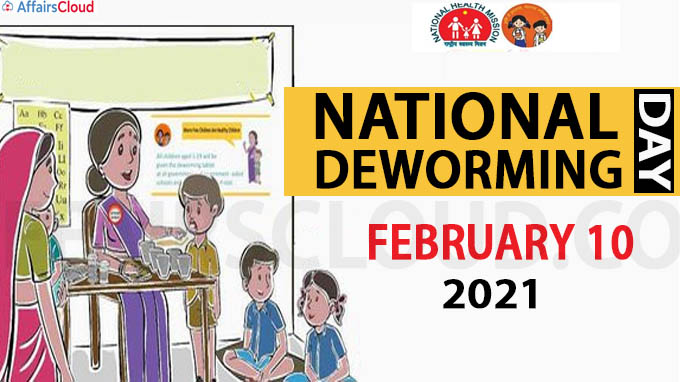 On February 9, 2021, Odisha Cabinet headed by its Chief Minister Naveen Patnaik approved the proposal for implementation of the ‘Rejuvenating Watersheds for Agricultural Resilience through Innovative Development (REWARD)’ project. The estimated expenditure for the project is INR 500 Crores, of which the World Bank will provide assistance of INR  350 Crores.
The project is being implemented to ensure efficient water management & enhanced cropping area.

ii.It is an initiative of Department of Land Resources, Government of India & World Bank
iii.The project will be funded in 70:30 proportion, where 70% will be funded by the World Bank & 30% by the State Government.
iv.It is being implemented in the Indian States of Karnataka, Andhra Pradesh
v.Total allocation for the project is ~ USD 250 Million (~ INR 1,821.25 crore) – USD 178.5 Million is from World Bank & balance is funded by Government of India & State Governments.
About Odisha:
Tribes – Bonda (also known as the Bondo), Gadabas, Sora (also known as saora)
Mountains & Peaks – Mahendragiri (Mountain), Deomali (Mountain Peak), Malayagiri (Mountain Peak)
About World Bank:
President– David Robert Malpass
Headquarters– Washington, D.C., United States
<<Read Full News>>

UP Introduced 16 Digit Unicode to Identify the Landholdings

The government of Uttar Pradesh(UP) has introduced a new system to issue a unique 16-digit unicode to identify the landholding in UP.  The unicode will be used to check on cases of land dispute and protect people from fraudsters.