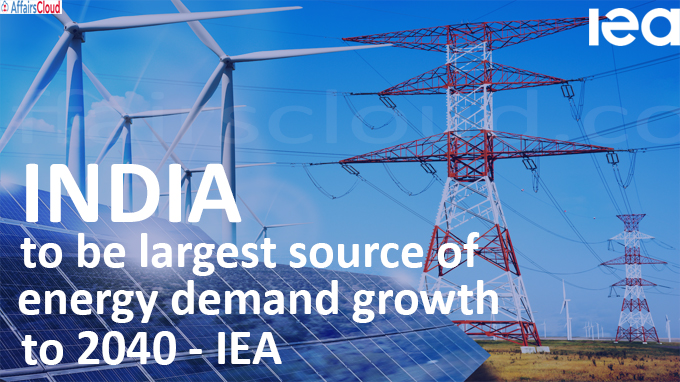 In accordance with the International Energy Agency’s (IEA) “India Energy Outlook 2021”, India will surpass European Union as the world’s third-biggest energy consumer by 2030. In this regard, India energy demand growth share will be maximum at 25% in the next two decades.

—Oil: India is world’s second-biggest net oil importer after China currently imports about 76% of its crude oil needs. That reliance on overseas oil is expected to rise to 90% by 2030 and 92% by 2040

–India will see the addition of 13 new cities like Mumbai in urban population which will boost the demand for cement, steel, electricity.

–By 2040, India’s power system will be world’s third-largest in terms of electricity generation.

–India also has 30% more installed renewables capacity than the United States (US).

–India currently accounts for 16% of the global coal trade.

i.According to the International Energy Agency’s (IEA) report, Renewables 2020 – Analysis and Forecast to 2025, India’s Renewable Energy sector will see the largest growth after COVID-19. India will double its green energy capacity addition in 2021 compared to 2020 levels.

ii.On 27th January 2021, Government of India has signed a Framework for Strategic partnership agreement with the IEA that will play a crucial role in enhancing global energy security. This initiative will pave the way for India to become a full time member of IEA.