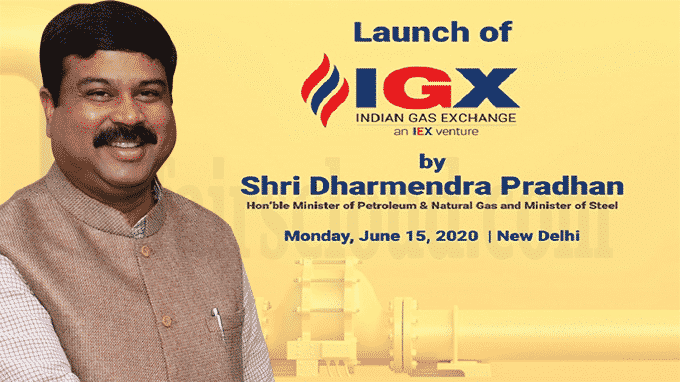 India’s first nationwide online delivery-based natural gas trading platform, “Indian Gas Exchange (IGX)” has been launched by Union Petroleum and Natural Gas Minister Dharmendra Pradhan during an e-ceremony (virtual). It has been launched on the lines of Prime Minister Narendra Modi’s vision to provide clean, affordable, sustainable and equitable supply of energy to every citizen.

IGX will offer six market products day-ahead, daily, weekly, weekdays, fortnightly and monthly. It allows buyers and sellers of natural gas to trade both in the spot market and in the forward market for imported natural gas. Initially, trading is proposed to commence at the physical hubs at Hazira and Dahej in Gujarat and Oduru/Kakinada in Andhra Pradesh. LNG will be regassified and sold to buyers through the exchange, removing the requirement for buyers and sellers to find each other.

Point to be noted: As of now, the price of domestically produced natural gas is decided by the government. It will not be sold on the gas exchange.

Efforts being taken to make India a gas-based economy; Target to raise natural gas share to 15% from 6%

Currently, Gas accounts for around 6.2% of India’s primary energy mix against the global average of 24%. In this regard, the government has set the target to raise the share of natural gas to 15% by 2030 from the current 6%. Following are the efforts being taken for the same: