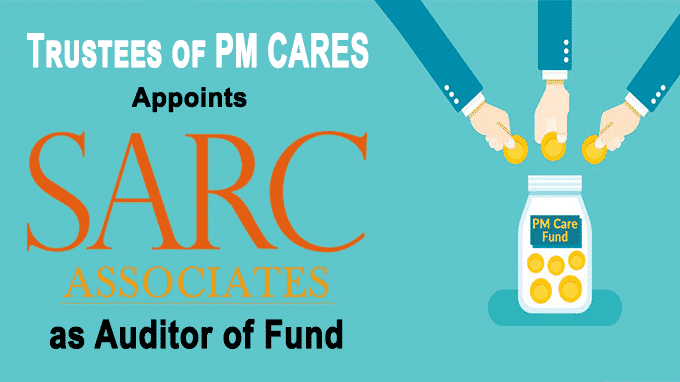 The Trustees of the Prime Minister’s Citizens Assistance and Relief in Emergency Situations (PM CARES) fund appointed SARC & Associates, New Delhi based Chartered Accountants as its auditors for the next three years.

Note: The SARC & Associates headed by Sunil Kumar Gupta is also the auditor of the PM’s National Relief Fund(PMNRF) appointed in 2019.

Background: In the second meeting of the PM CARES fund on 23rd April 2020, the decision to appoint independent auditors were made by the trustees.

i.The Prime Minister is the chairperson of the Board of trustees and he nominates the three trustees to the board.

ii.The Trustees are the Ministers of Defence, Home and Finance.

iii.The fund is administered on honorary basis by the joint secretary of administration in the Prime Minister’s Office(PMO) and assisted by an officer in a director or deputy secretary rank in the PMO.

iv.The headquarters of the fund is the PMO, South Block, New Delhi.

i.The fund is registered under charitable trust in Delhi and will be audited at the end of financial year on 27th March 2020.

ii.Around Rs.3100 crores is allocated from the fund as Rs2,000 crores for the supply of 50,000 made in India ventilators to the government hospitals all over the nation, Rs.1000 crore to support migrant labours and Rs.100 crores for development of COVID-19 vaccine.

iii.A petition was filed in the Delhi High Court to declare the fund as a public authority under the Right to information Act after the PMO refused to answer the RTI about the fund.

iv.On the basis of maintainability the government opposed the petition.