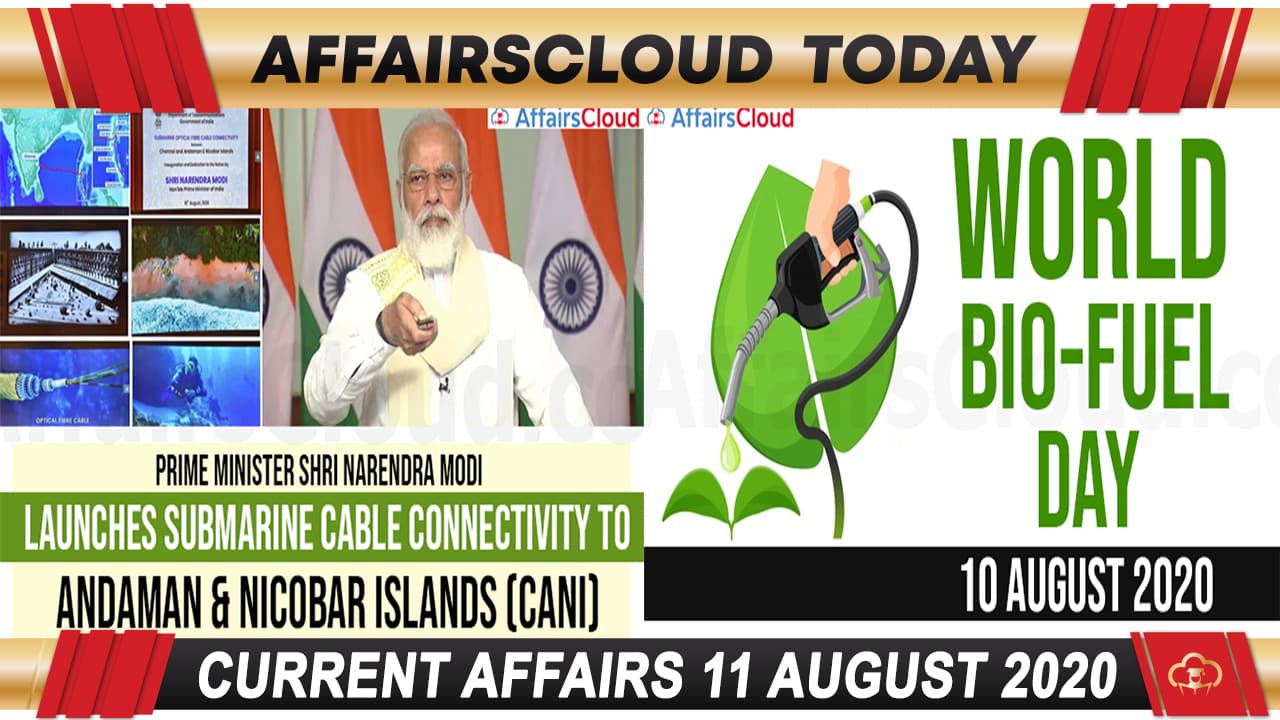 We are here for you to provide the important Recent and Latest Current Affairs 11 August 2020, which have unique updates of Latest Current Affairs 2020 events from all newspapers such as The Hindu, The Economic Times, PIB, Times of India, PTI, Indian Express, Business Standard and all Government official websites. 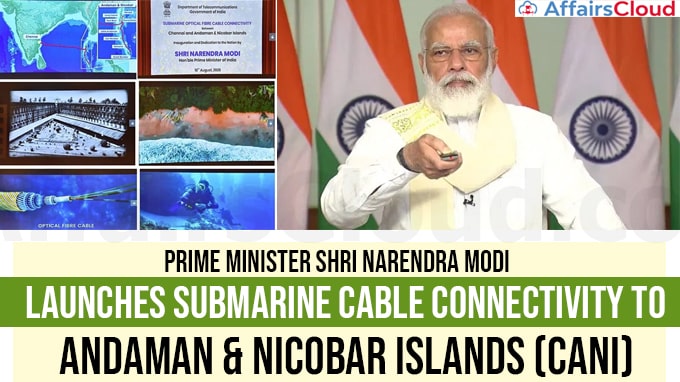 i.On August 9, 2020, Prime Minister Narendra Modi launched the Central Sector Scheme (CSS) of financing facility under the Agriculture Infrastructure Fund of Rs. 1 lakh crore via video conferencing. The duration of the scheme is 10 years i.e. from FY2020 to FY2029.
ii.A 3% interest subvention and credit guarantee under Credit Guarantee Fund Trust for Micro and Small Enterprises (CGTMSE) scheme for loans up to Rs 2 Crore will be provided to the beneficiaries under this financing facility.
iii.PM also released the 6th instalment of funds of Rs. 17,000 crore to 8.5 crore farmers under the Pradhan Mantri Kisan Samman Nidhi Yojna (PM-KISAN) scheme.
About Pradhan Mantri Kisan Samman Nidhi Yojna (PM-KISAN):
PM-KISAN is CSS under which an income support of Rs 6000/- per year in three equal installments is provided to all farmer families irrespective of the size of their landholdings.
<<Read Full News>> i.On 9th August 2020, Piyush Vedprakash Goyal, Union Minister of Railways and Commerce & Industry and Pralhad Joshi, Union Minister of Parliamentary Affairs, Coal & Mines dedicated the Railway Museum at Hubballi to the Nation in the event over a video conference presided by Suresh Angadi Channabasappa, Minister of State for Railways.
ii.The Railways Museum at Hubballi is the first of its kind in North Karnataka and the second in the Southern Western Railways after the historic Rail Museum at Mysuru.
About Ministry of Railways:
Union Minister– Piyush Vedprakash Goyal
Minister of State– Suresh Angadi Channabasappa
<<Read Full News>> 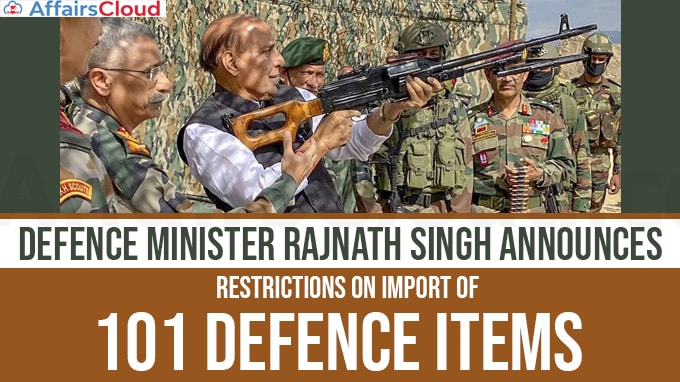 i.On August 9, 2020, the Department of Military Affairs (DMA), Ministry of Defence (MoD) decided to restrict import of 101 weapons and military platforms, the embargo on which is planned to be progressively implemented between 2020 and 2024, in order to boost indigenous defence manufacturing on the lines of “Atmanirbhar Bharat”.
ii.In this regard, the Defence Industry will receive contracts worth almost Rs 4 lakh crore within the next five to seven years.
iii.Apart from this, defence ministry has bifurcated the capital procurement budget for 2020-21 between domestic and foreign capital procurement routes. A separate budget head has been created with an outlay of nearly Rs 52,000 crore for domestic capital procurement in FY20-21.
About Ministry of Defence (MoD):
Rajnath Singh constituency– Lucknow, Uttar Pradesh (UP)
Minister of State (MoS)– Shripad Yesso Naik
<<Read Full News>> i.On August 8, 2020, Prime Minister Narendra Modi inaugurated the Rashtriya Swachhata Kendra (RSK) an interactive experience centre on the Swachh Bharat Mission, at the Gandhi Smriti and Darshan Samiti at Rajghat, New Delhi in the presence of Gajendra Singh Shekhavat, Union Minister of Jal Shakti and Rattan Lal Kataria, Minister of State (MoS) of Jal Shakti.  He dedicated the RSK as a permanent tribute to Mahatma Gandhi.
ii.He also launched ‘Gandagi Mukt Bharat’, a special week long campaign from August 8, 2020 for swachhata in the run up to Independence Day, during which each day till 15th August will have special swachhata initiatives in urban and rural India to re-enforce the jan andolan for swachhata.
About Ministry of Railways:
Union Minister– Piyush Goyal
Minister of state (MoS)– Suresh Channabasappa Angadi
<<Read Full News>> 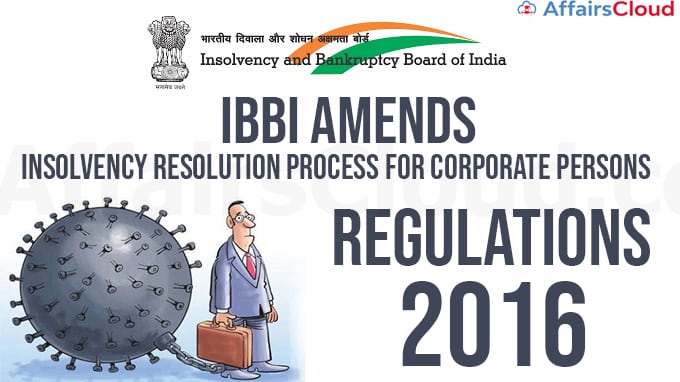 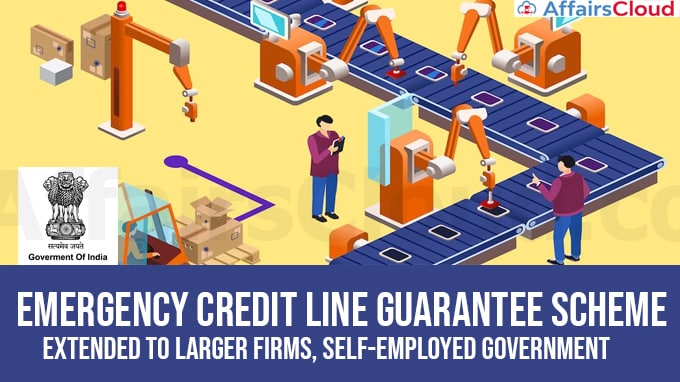 On 8th August 2020, Finance Minister Nirmala Sitharaman announced that the Central Government have extended its Emergency Credit Line Guarantee Scheme (ECLGS), credit guarantee scheme for the micro, small and medium enterprises(MSME), to cover the loans given to the large firms, self-employed professionals and people who have taken a loan for business purpose.
About Ministry of Finance:
Union Minister– Nirmala Sitharaman
Minister of State– Anurag Singh Thakur
<<Read Full News>> 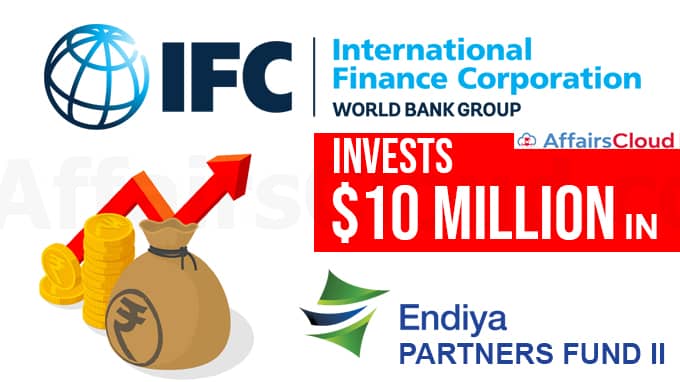 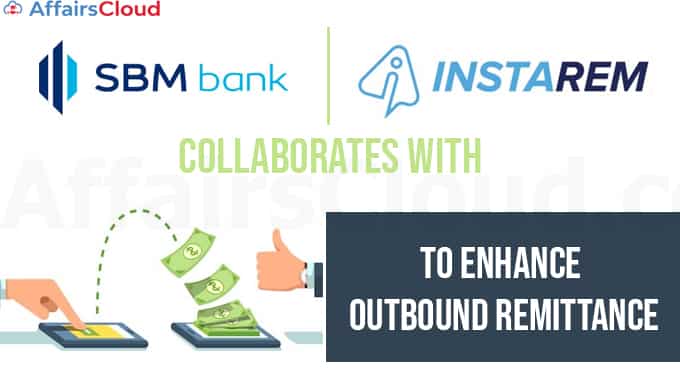 Key Info
i.In total, Martin Vizcarra made five changes in his cabinet of 19 ministers, including the prime minister.
ii.It was the second cabinet reorganization in almost three weeks.
iii.Maria Antonieta Alva, Economy and finance minister will remain in her role.
Background
i.Pedro Cateriano was sworn in as the new Prime Minister of Peru on July 15 to replace Vicente Zeballos in the post.
ii.The congress recently rejected the vote of confidence requested by the Ministerial Cabinet led by him.
Note– At the end of the plenary session the cabinet received 37 votes in favor, 54 against, and 34 abstentions
About Peru:
Capital–  Lima
Currency- Peruvian Sol(PEN)

Mauritania’s President Mohamed Ould Cheikh El Ghazouani has named Mohamed Ould Bilal as the 16th Prime Minister of the Islamic Republic of Mauritania on August 06, 2020.
i.Mohamed Ould Bilal belongs to the political party of Union for the Republic (UPR). He has served as Political Advisor and headed several state agencies.
ii.Bilal’s predecessor Ismail Ould Cheikh Sidiya and his entire government resigned on 6th August, 2020 amidst an investigation into high-level corruption charges against them.
About Mauritania:
Capital – Nouakchott
Currency – Ouguiya 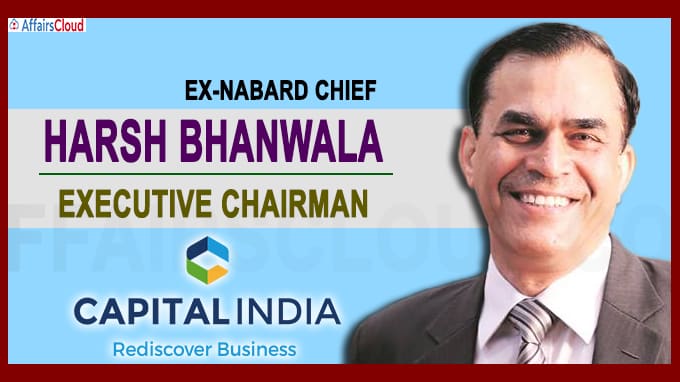 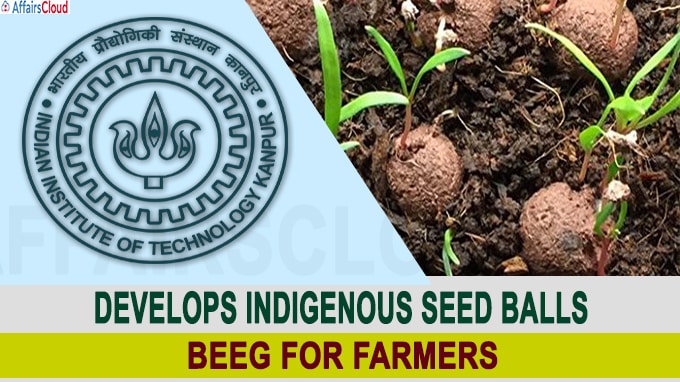 Key Info
i.BEEG is enriched with the right indigenous ingredients(like compost & clay) and seeds to germinate early.
ii.It is the best way to utilise Monsoon and plant as many trees as possible without risking lives by social gathering during the pandemic.
Key facts about BEEG
i.BEEG should be thrown at the target areas and they will germinate when they come into contact with water(rainy seasons are a perfect choice).
ii.It eliminates the need to dig pits for planting saplings. The development of the SEED balls will bring a revolutionary change in the agriculture process. 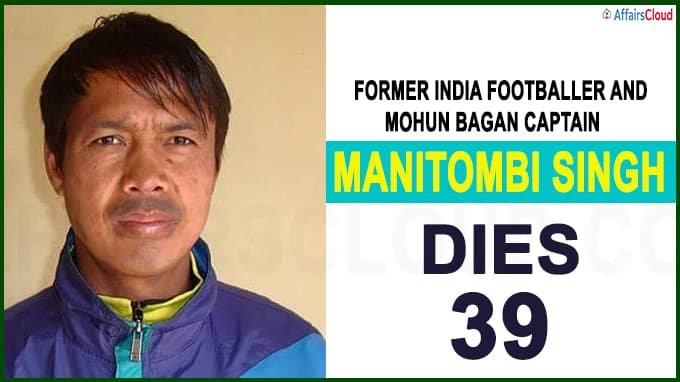 Former Indian Defender and former Mohun Bagan club captain Laishram Manitombi Singh was suffering from a prolonged illness and breathed his last on August 09, 2020 in his native village near Imphal, Manipur.
Achievements:
i.Manitombi Singh was a key member of the Indian under-23 side which lifted the LG Cup in 2003 under the captaincy of Bhaichung Bhutia.
ii.It was the Indian Football Team’s first International victory since their victory at an eight-nation tournament in Singapore in 1971.
iii.He represented India in the 2002 Busan Asian Games in South Korea.
iv.Manitombi played a key role in Manipur’s maiden Santosh Trophy triumph in 2002.
Clubs
i.He started his career in Army Boys and Services and has represented Air India, Salgoacar before moving to Mohun Bagan in 2003.
Manitombi Singh last played for Manipur State League defending champions Anouba Imagi Mangal in the 2015-16 season and became their head coach after retirement. 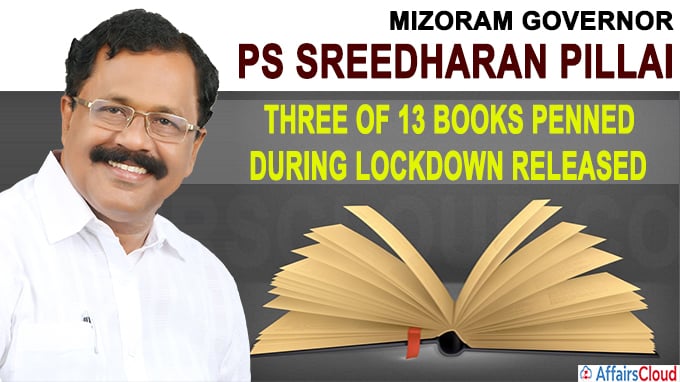 On August 9, 2020 Books authored by Mizoram Governor PS Sreedharan Pillai titled ‘Corona Kavithakal’ was released by Mizoram Chief Minister Zoramthanga. Meanwhile ‘Republic Day 2020’ and ‘Thus Speaks the Governor’ were released by Gauhati High Court Chief Justice Ajai Lamba through a video message. These books are part of his recently penned books(at least 13), which include collections of poems in English and Malayalam since March i.e., during the lockdown.
Key Info
i.Ten of his poems, including “Corona Kavithakal” in Malayalam, are related to COVID-19.
ii.His other poems include Vayojanam (Elderly), Wuhan, Mahamari (Pandemic) and Oh, Mizoram (a collection of poems in English- which will be included in the book Oh Mizoram) among others.
PS Sreedharan Pillai’s Writing Skills
He published his 1st book in 1986. He published 105 books before becoming governor.
Till now he has written at least 121 books of different categories, including poetry.
Key People
State Congress president Lal Thanhawla and chief secretary Lalnunmawia Chuaungo attended the event.
Note– PS Sreedharan Pillai is the 21st governor of Mizoram 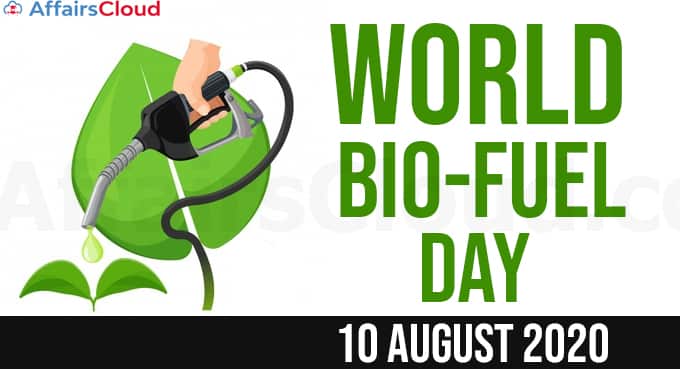 i.World Biofuel Day is observed annually on August 10 to raise awareness about the importance of non-fossil fuels as an alternative to conventional fossil fuels.
ii.The day honours the research experiments by Sir Rudolf Christian Karl Diesel(inventor of the diesel engine) who ran an engine with peanut oil in 1893.
iii.In India, the day has been celebrated by the Ministry of Petroleum and Natural Gas since 2015.
iv.Webinar was organized by the Ministry of Petroleum and Natural Gas, with the theme “Biofuels towards Atmanirbhar Bharat”.
<<Read Full News>> 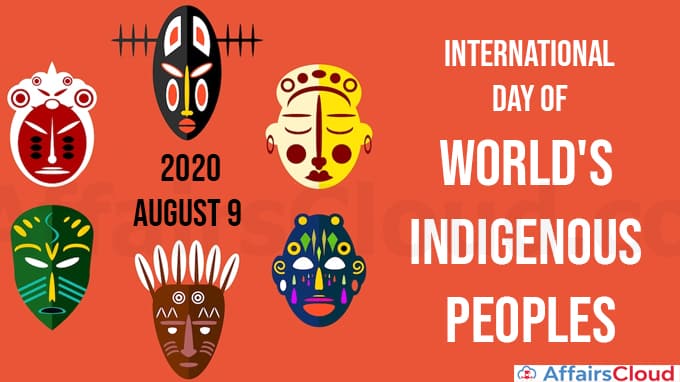 The 9th August of every year is observed as Nagasaki day all over the world to promote peace and to create awareness about the hazards of nuclear weapons. The 9th August 2020, Marks the 75th anniversary of the atomic bombing of Nagasaki, Japan.
History:
On 9th August 1945, three days after the bombing on Hiroshima, The United States dropped the Atomic bomb code named “Fat Man” over the city of Nagasaki, Japan which instantly killed around 74,000 people.
Effects of Bombing:
The survivors of the atomic bombing developed various illnesses and cancer due to the exposure to high level radiation.
Events:
i.Tomihisa Taue, the mayor of Nagasaki read the Peace declaration on the ceremony on 9th August 2020 and he urged the global ban on nuclear weapons.
ii.Japanese Prime Minister Shinzo Abe attended the event along with the survivors and their family members.
iii.During the event, the message of António Guterres, United Nations Secretary General was read by his undersecretary, Izumi Nakamitsu. 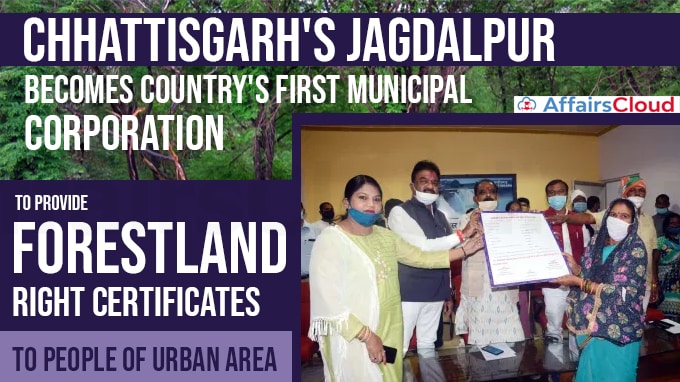 On August 5, 2020 Andhra Pradesh(AP) Government signed an Memorandum of Understanding (MoU) with US based, The Boston Group(TBG) to set up a facility at Visakhapatnam dedicated to Research and Development (R&D) in the Information Technology sector with focus on learning platforms and also leveraging advanced technologies like artificial intelligence (AI), machine learning (ML) and cybersecurity. 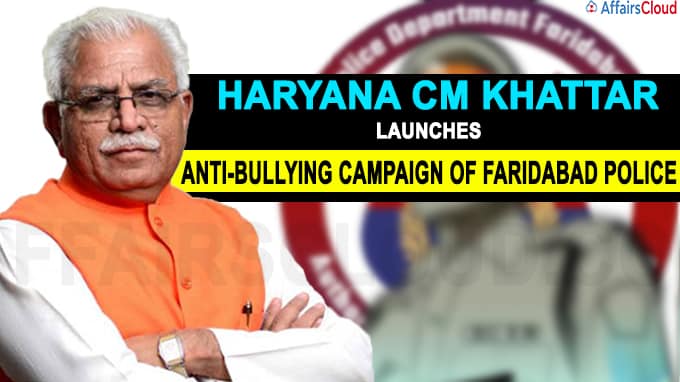 On 9th August 2020, Manohar Lal Khattar, Chief Minister of Haryana launched the anti-bullying campaign of the FAridabad Police over their Instagram, Facebook and Twitter page with username @FBDpolice to report any form of bullying in the schools, colleges, neighbourhood, home and workplace and to implement the targeted programs to counter bullying.
Note:
The anti-bullying campaign is the first of the series which will cover the issues related to drugs, gambling, addictions, online frauds and human trafficking.
About the Campaign:
i.The campaign initiative is a part of the ‘Teen Age Police’ programme of Faridabad Police.
ii.This campaign focuses on teenagers who are mostly affected by bullying which damages their confidence, personality development and social intelligence.
iii.This provides a platform for the victims to report their bullies and provide counselling to the bullies through the support of NGOs which are working with youth at risk.
iv.This will eliminate the violence, intimidation at interpersonal and group relations at an early stage.
v.This will support the youths to develop social skill and empathy and become productive and responsible adults.
About Haryana:
Chief Minister– Manohar Lal Khattar
Governor– Satyadeo Narain Arya
Capital– Chandigarh 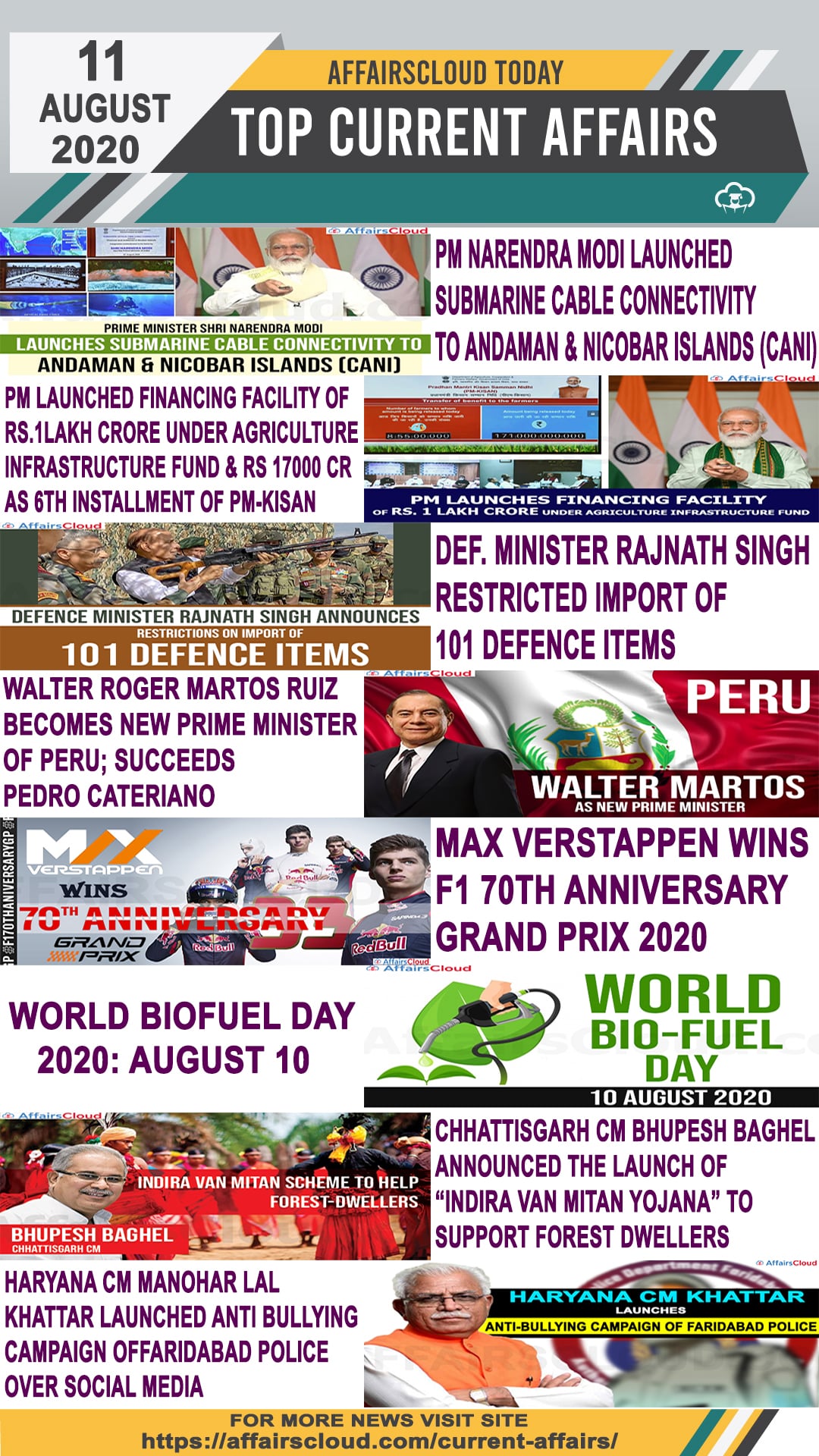