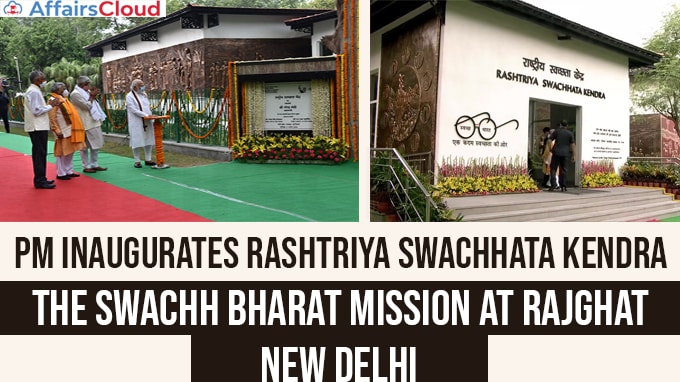 On August 8, 2020, Prime Minister Narendra Modi inaugurated the Rashtriya Swachhata Kendra (RSK) an interactive experience centre on the Swachh Bharat Mission, at the Gandhi Smriti and Darshan Samiti at Rajghat, New Delhi in the presence of Gajendra Singh Shekhavat, Union Minister of Jal Shakti and Rattan Lal Kataria, Minister of State (MoS) of Jal Shakti.  He dedicated the RSK as a permanent tribute to Mahatma Gandhi.

PM Narendra Modi also launched ‘Gandagi Mukt Bharat’, a special week long campaign from August 8, 2020 for swachhata in the run up to Independence Day, during which each day till 15th August will have special swachhata initiatives in urban and rural India to re-enforce the jan andolan for swachhata.

Railways will observe cleanliness week from August 10 to August 15, 2020 to mark the Independence Day. During the week, a special Cleanliness drive will be launched and special focus will be given to clean the tracks, station offices, colonies, work sites, edge of stations and other areas near railway premises.

On July 27, 2020, Indian Railways handed over the specifically modified 10 railway broad gauge locomotives to Bangladesh, which will help in handling the increasing volume of passenger and freight train operations in Bangladesh. All locomotives can attain speed of up to 120 km per hour and have a residual life of 28 years or more.The move was part of a sharpened focus on India’s “neighbourhood first” policy.