We are here for you to provide the important Recent and Latest Current Affairs 10 June 2021, which have unique updates of Latest Current Affairs 2021 events from all newspapers such as The Hindu, The Economic Times, PIB, Times of India, PTI, Indian Express, Business Standard and all Government official websites. NITI Aayog and Piramal Foundation have launched ‘Surakshit Hum Surakshit Tum Abhiyaanin’ in 112 Aspirational Districts to help district administrations to provide home-care support to COVID-19 patients who are asymptomatic or have mild symptoms.

Implementation
i.The initiative will be led by District Magistrates in partnership with over 1000 local Non-Governmental Organizations (NGOs) and volunteers. It will train around 1 Lakh volunteers to connect with patients through calls and support the training of NGOs and volunteers.
ii.NGOs will mobilize local volunteers for providing home-care support to those affected, based on the guidelines of the Ministry of Health and Family Welfare.
About NITI Aayog
CEO – Amitabh Kant
Headquarters – New Delhi
About Piramal Foundation
Chairman – Ajay P
CEO – Aditya Natraj
Headquarters – Mumbai, Maharashtra
>>Read Full News Confederation of Indian Industry (CII) – Indian Green Building Council (IGBC) signed a Memorandum of Understanding(MoU) with the Indian Institute of Architects (IIA) to strengthen the Green Building Movement and to promote sustainable development in the field of Architectural Design and planning.
V Suresh, Chairman of IGBC and C R Raju, National President of IIA, exchanged the MoU over a virtual platform.
Aim:
i.To set a new global benchmark in environmentally sensitive building design, resource conservation, energy and environmental management.
ii.Under this MoU, CII-IGBC will jointly work with IIA in research areas related to architectural design, handholding the projects, in creating awareness and through outreach programmes
Green Buildings and India:
i.India is one of the top 3 countries in the world in terms of the registered green building footprint.
ii.More than 6548 Green Building projects are registered with IGBC which accounts for a footprint of 7.83 billion square feet.
About Indian Green Building Council (IGBC):
Indian Green Building Council (IGBC) is a part of the Confederation of Indian Industry (CII).
Formed in 2001
Headquarters– Hyderabad, Telangana The Central Government has announced the extension of the Scheme to distribute Free of cost – Wheat & Rice Under Pradhan Mantri Garib Kalyan Anna Yojana (PMGKAY) to around 80 Crore people till November 2021.  Earlier, the scheme was applicable for the months of May & June 2021 only.
i.Under Pradhan Mantri Garib Kalyan Anna Yojana (PMGKAY), the Central government is distributing  5 Kg free food grains per person per month to 80 Crore beneficiaries covered under the National Food Security Act (NFSA).

The sixth batch containing three Rafale fighter aircrafts have recently landed in India. These planes will be deployed in Hasimara, West Bengal.These aircrafts were developed by the France-based Dassault Aviation. 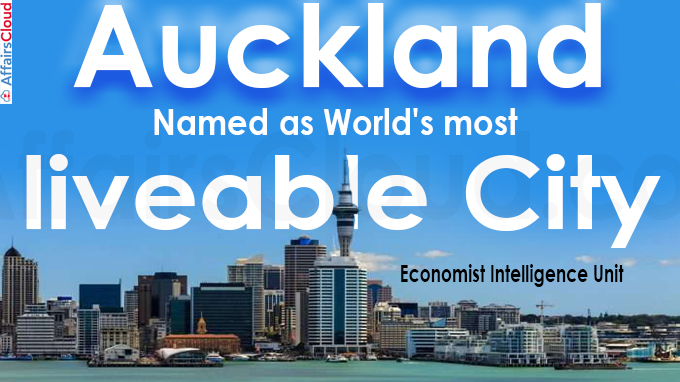 According to the Global Liveability Index 2021 released by the Economic Intelligence Unit (EIU), New Zealand’s Auckland has been named as the World’s Most Liveable City due to its ability to control the spread of COVID-19 pandemic faster and lift restrictions earlier than other cities in the world even though city had more COVID-19 cases. 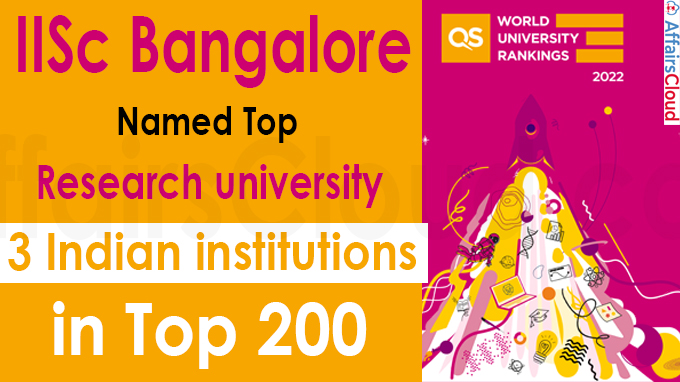 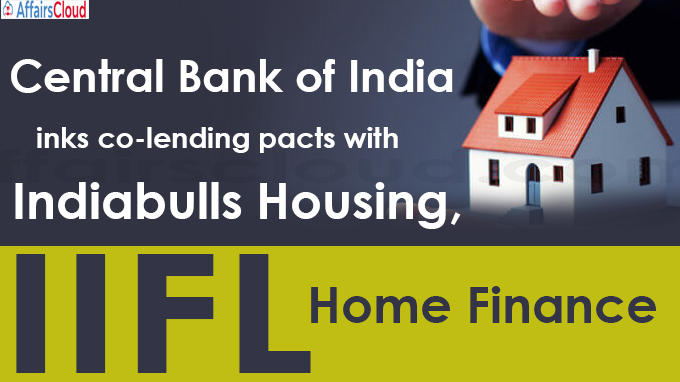 On June 08, 2021, Karnataka Industrial Area Development Board (KIADB) signed a Memorandum of Understanding (MoU) for 3 years with HDFC Bank to provide a wide range of financial products and services to its customers.
Key points:
i.To attract more investments into Karnataka and to make the land acquisition for industrial purposes more affordable, KIADB collaborated with HDFC bank to enable its eligible investor/customer of KIADB to avail of credit facilities from HDFC Bank as per Bank process and policies.
ii.As per the MoU, KIADB nominates HDFC Bank as one of its banking partners to finance its eligible customers/allottees of industrial land/plot for setting up their project, HDFC bank also accepts the nomination.
iii.HDFC bank will offer credit facilities to eligible companies/investors of KIADB up to 75 percent of the project.
About Karnataka Industrial Area Development Board (KIADB):
Establishment – 1966 through KIAD Act
Headquarters – Bengaluru, Karnataka
CEO & Executive Member – N Shivashankara
>>Read Full News

The Reserve Bank of India (RBI) has extended the banking license of the Rupee Co-operative Bank, Pune, Maharashtra till August 31, 2021. During the last 5 years, the Bank has made a total recovery of Rs 263.93 crores and an aggregate operating profit of Rs 70.70 crores till March-2021. The Bank had paid Rs 366.54 Crores to 92602 needy depositors under the Hardship Scheme till March-2021. 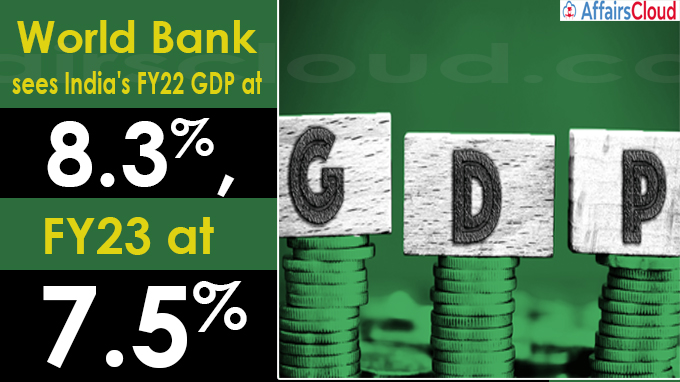 In its June 2021 Global Economic Prospects, World Bank revised India’s GDP growth forecast for FY22 to 8.3 percent from its earlier estimate of 10.1 percent, (the forecast has been revised up by 2.9 percentage points). It has also projected India’s growth in FY23 at 7.5 percent due to the impact of COVID-19.

GMR Airports-run Delhi and Hyderabad airports have been felicitated by the Airports Council International (ACI) Asia-Pacific Green Airports Recognition 2021(Platinum and Gold Recognistions) for their environmentally sustainable initiatives.
AIC’s Platinum and Gold Recognition:
a.The Delhi International Airport Limited (DIAL):
i.DIAL was awarded with the Platinum Recognition in the over 25 Million Passengers Per Annum (MPPA) category.
ii.This is the 5th consecutive year where DIAL has been awarded for its Green taxiing initiatives at Indira Gandhi International Airport (IGI) Airport based on TaxiBots.
iii. The use of TaxiBot has reduced around ~532 tonnes of Carbon at Delhi Airport. It also helped airlines in saving around ~214,000 litres of aviation turbine fuel (ATF).
iv.DIAL was working towards its objective of becoming – a net-zero carbon emission airport by 2030. DIAL is also named as IGI.
b.The GMR Hyderabad International Airport Limited (GHIAL):
i.GHIAL received the Gold Recognition in the below 25 MPPA category.
ii.GHIAL was receiving this award 4th times in a row for its sustainable airport operations for effective Air Quality Management.
iii.Some of the initiatives include – Usage of Fixed Electrical Ground Power (FEGP) and saving Auxiliary Power Unit (ATF), use of Solar-powered Baggage Freight Loader (BFL), step ladder, electric coaches, tugs, and vehicles resulting in the saving of diesel and associated air emissions. GHIAL is also named as, Rajiv Gandhi International Airport.
ACI’s Green Airports Recognition programme:
i.It is a programme that intends to promote environmental best practices to minimize the aviation industry’s impact on the environment. It recognizes ACI Asia-Pacific members for outstanding environmental initiatives and projects every year.
ii.Theme for 2021: The environment-based theme by ACI for 2021 was – Air Quality Management specifically emphasizing the benefit of local air quality management.
About GMR Group:
It presently owns and operates Delhi and Hyderabad International Airports.
Establishment – 1978
Chairman – B V N Rao
About Delhi International Airport Limited (DIAL):
It is the 1st Carbon Neutral Airport in Asia Pacific Region
CEO – Videh Kumar Jaipuriar The Government of India has appointed Anup Chandra Pandey, retired Ias officer of 1984 batch, Uttar Pradesh Cadre as the Election Commissioner of India with effect from the date he assumes the office. He will retire in February 2024.

About Anup Chandra Pandey:
i.Anup Chandra Pandey has served as the chief secretary of Uttar Pradesh(UP) under Chief Minister Yogi Adityanath from 2018 to 2019.
ii.He has also served as the Infrastructure and Industrial Development Commissioner of UP.
About Election Commission of India(ECI):
Election Commission of India is an autonomous constitutional authority responsible for administering Union and State election processes in India.
ECI was established in accordance with the Constitution on 25th January 1950.
Chief Election Commissioner(CEC)– Sushil Chandra
Headquarters– New Delhi The Appointments Committee of the Cabinet has approved re-appointment of Mahesh Kumar Jain(MK Jain) as Deputy Governor of Reserve Bank of India (RBI) for a period of two years with effect from 22.06.2021, or until further orders, whichever is earlier.

About MK Jain:
i.MK Jain was appointed as deputy governor of RBI for three years in June 2018.
ii.Before that he served as Managing Director(MD) of IDBI Bank since March 2017.
iii.He also served as Managing Director(MD) and Chief Executive Director(CEO) of Indian Bank from November 2015 to March 2017.
About Reserve Bank of India(RBI):
Key Appointments in RBI are made by the Appointments Committee of the Cabinet (ACC) headed by the Prime Minister appoints the governor and deputy governors.
Establishment: 1st April 1935
Headquarters: Mumbai, Maharashtra
Governor: Shaktikanta Das(25th governor of the RBI)
Deputy Governors: Michael Patra, M Rajeshwar Rao,MK Jain and Rabi Sankar. The Reserve Bank of India(RBI) has granted approval for re-appointment of Chandra Shekhar Ghosh as Managing Director & Chief Executive Officer (MD&CEO) of Bandhan bank, for a period of three years, with effect from July 10, 2021.

Bandhan had merged with Gruh Finance to reduce the promoter ownership to the 60 percent level from the earlier 82 percent.
Key Points:
i.Chandra Shekhar Ghosh had set up Bandhan as an NGO in April 2001 and it was converted into an NBFC later.
ii.After getting licence from the RBI, it was established as a universal bank in August 2015 with  headquarters in Kolkata,West Bengal.
iii.Bandhan is the first bank in India which has been transformed from a microfinance institution to a Universal Bank.
Note:
According to RBI’s bank licence norms, a private sector bank’s promoter will need to pare holding to 40 per cent within three years, 20 percent within 10 years and to 15 per cent within 15 years.

Choguel Kokalla Maïga Named as the New PM of Mali

Assimi Goita, the transitional president of Mali named Choguel Kokalla Maïga, as the transitional Prime Minister(PM) of Mali. He is the president of the Strategic Committee of the Movement of June 5-Rally of Patriotic Forces (M5-RFP).
Choguel Kokalla Maïga succeeds Moctar Ouane, the previous PM of Mali who was arrested by the Military on 24th May 2021.

About Choguel Kokalla Maïga:
i.Choguel Kokalla Maïgawas born on April 2, 1958 in Tabango, Gao region, Mali.
ii.He started his political career with the National Union of Young People of Mali (UNJM), founded by former President Moussa Traore.
iii.He has served as the  Minister of Industry and Commerce from 2002 to 2007 and the Minister of Digital Economy, Information and Communication from 2015 to 2016.
About Mali:
President– Assimi Goita
Prime Minister(PM)– Choguel Kokalla Maiga
Capital– Bamako
Currency– West African CFA Franc 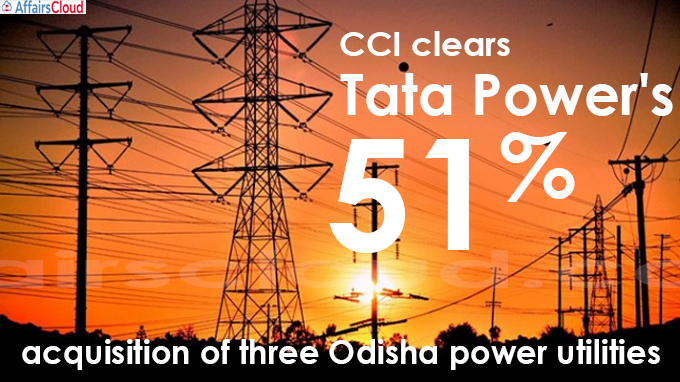 The Income Tax Department launched its new e-filing portal www.incometax.gov.in. The portal aims to provide a convenient, modern, and seamless experience to taxpayers.

Key Features of the New Portal 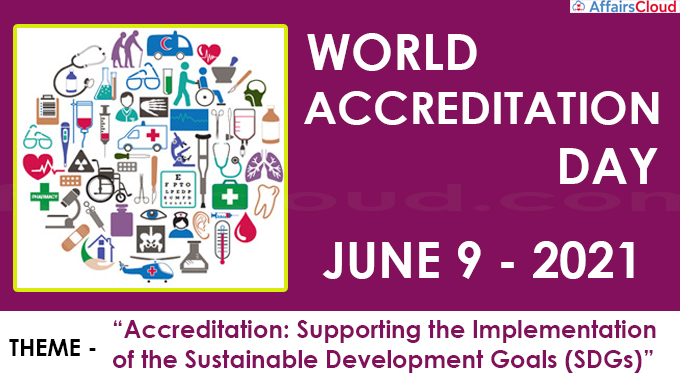 Key Points:
i.Workers’ data can be linked directly to the ‘CM Dashboard’ using the e-Nirmal portal and mobile app to monitor in real-time.
ii.21000 service centers have been set up for registration work and to issue the U-WIN smart cards.
iii.Workers can either use these online platforms or to visit personally for registration.
iv.Workers having the U-WIN cards can get benefits of several government schemes, such as insurance, ”Ma Amrutam” scheme for hospitalisation, and affordable meals under the ”Shramik Annapurna Yojna” 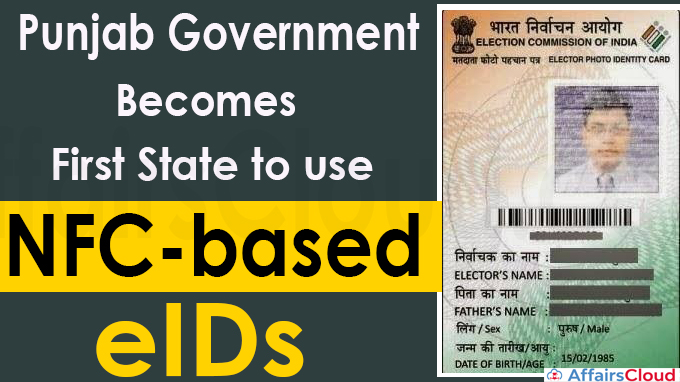 Punjab Government becomes the first state in India to  initiate the usage of  Electronic Identity Cards (eIDs) equipped with Near Field Communication (NFC) technology for Government officers and employees through Punjab Mandi Board.
Key points:
i.These NFC-based eIDs will be used as a primary authentication tool and operate at 13.66 MHz and transfer data at up to 424 Kbits/ seconds.
ii.An employee will be authenticated by his/ her Human Resource Management System (HRMS) data where the details of every officer and employee is stored in the form of a service book.
Punjab Becomes First State To Launch Digi-Locker Facility For Farmers
Besides promoting e-governance, Punjab also launched a digi-locker facility for its farmers,becoming the first State in India to do so.