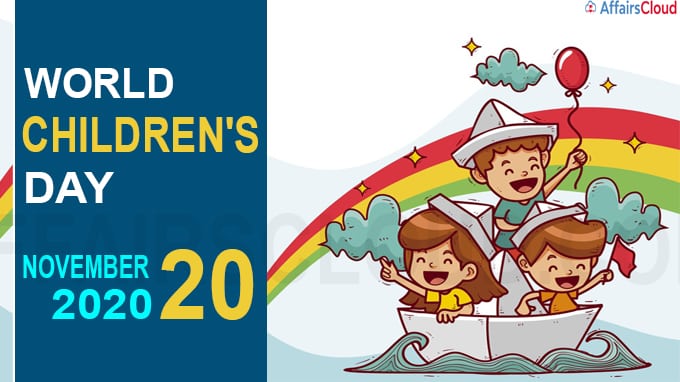 United Nations(UN) World Children’s Day is observed annually on November 20 to promote international togetherness and awareness among children globally. The day also aims to improve the welfare of children. This day is UNICEF(United Nations Children’s Fund)’s annual day of action for children, by children.

Focus theme of World Children’s Day 2020- ‘Reimagine a better future for every child’.

During the World Children’s Day 2020, ‘Go Blue’ campaign was launched. In line with the campaign all the Major world landmarks globally are “going blue” to stand for the rights of every child.

i.UNICEF launches a six-point plan to protect our children

ii.The plan proposes a set of practical and concrete actions to reunite the world around a common cause: the realization of the Sustainable Development Goals and the Convention on the Rights of the Child.
COVID-19 Crisis Result in a Child Rights Crisis

The COVID-19 crisis has resulted in a child rights crisis. It is to be noted that the costs of the pandemic for children are immediate and  if they are not addressed and go unnoticed, the effects may last a lifetime.

i.The day supports, promotes and celebrates children’s rights, translating into dialogues and actions that will build a better world for children.

ii.As per UN, Mothers and fathers, teachers, nurses and doctors, government leaders among others play a vital role to make the day relevant for their societies, communities and nations.

Children’s day in India  also known as ‘Bal Diwas’ is celebrated annually across India on November 14 to commemorate the birth anniversary of Jawaharlal Nehru, the first Prime Minister of India.