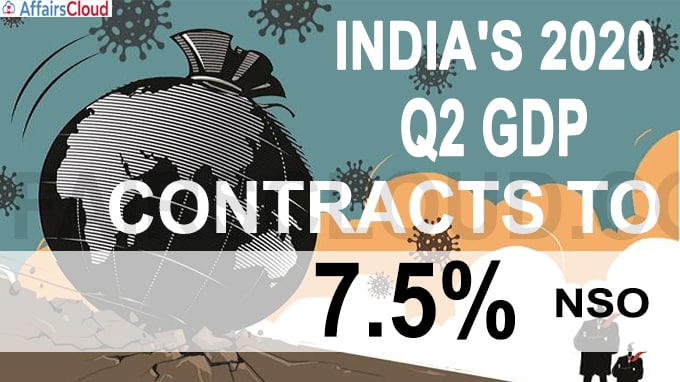 In accordance with the official data released by the National Statistics Office (NSO), India’s gross domestic product (GDP) for the second quarter ended September 30, 2020 (Q2FY21) contracted by 7.5% as compared to the expansion of 4.4% in the corresponding July-September period of 2019-20.

Growth/Decline of Other Sectors in Q1FY21:

–Manufacturing sector saw a 0.6% growth in July-September after a massive contraction of 39% in Q1FY21.

–Agriculture sector grew by 3.4%, while the trade and services sector showed contraction at 15.6%.

–Construction sector, a second-largest employer in the economy is contracted only 8.6% as compared to (-) 50% in Q1.

–The core sector, which includes cement, steel, electricity and crude oil, slipped into red again in October and declined 2.5% from just 0.1% drop in September.

–With the manufacturing returning to the positive territory, the overall Gross value Added (GVA) narrowed contraction to 7% in Q2.

–Foreign exchange reserves in India increased to a record high of $575.29 billion on the week ended-November 20, rising from $572.77 bn in the previous week.

–Fiscal deficit further widened to Rs 9.53 lakh crore, which is nearly 120 per cent of the annual budget estimate, at the end of October.

–GDP at constant prices for H1 FY21 is estimated at Rs 60.04 lakh crore, as against Rs 71.20 lakh crores during the corresponding period of the previous year. This implies a contraction of 15.7 per cent in H1 FY21, compared to a growth of 4.8 per cent during the same period last year.