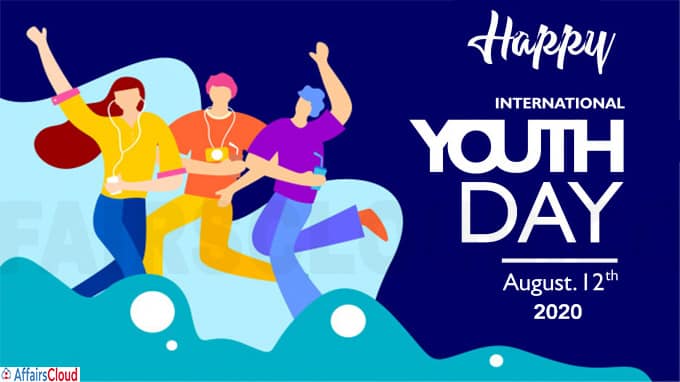 The United Nations(UNs) International Youth Day(IYD) is annually celebrated on 12th August to raise awareness on the legal and cultural problems related to the youths all over the world and to celebrate and focus on the voices, actions and initiatives of young people.

IYD 2020 is convened by the UN Department of Economic and Social Affairs (DESA) in partnership with the Inter-Agency Network on Youth Development(IANYD) Youth Caucus and Create2030.

The First International Youths day was observed on 12th August 2000.

The IYD 2020 is celebrated under the theme – “Youth Engagement for Global Action” to highlight the methods in which the engagement of the young people at the local, national and global levels promotes the national and multilateral institution and processes.

In December 1999, The United Nations General Assembly endorsed the recommendation made by the World Conference of Ministers Responsible for Youth held in Lisbon from 8th to 12 August 1998, adopted the resolution A/RES/54/120 declaring the 12th of August as International Youth Day.

i.Due to the Global pandemic situation, the 2020 IDY will be in the Podvast -style discussion hosted by youth for youth along with the global celebrations to recognise the importance of the participation of youths in political, economic and social life and process.

ii.The 2020 IDY focuses on the engagement of the youths in,

i.The United Nations launched #31DaysOfYouth, a social media campaign to celebrate the youths from all over the world throughout the month of august.

ii.The United Nations Women celebrates and recognises the contribution of the youth amid COVID-19 pandemic.

i.Around 1.2 billion youth aged between 15 to 24 accounts to around 16% of the global population.

ii.By 2030 the target date of Sustainable Development Goals(SDG), the number of youths is estimated to increase by 7%, around 1.3 billion.

iii.To meet the employment requirement of the youths around 600 million jobs would be created in the upcoming 15 years.

iv.The worldwide proportion of the young people not in employment, education or training (NEET) was high over the last 15 years which is currently around 30% of young women and 13% of young men.