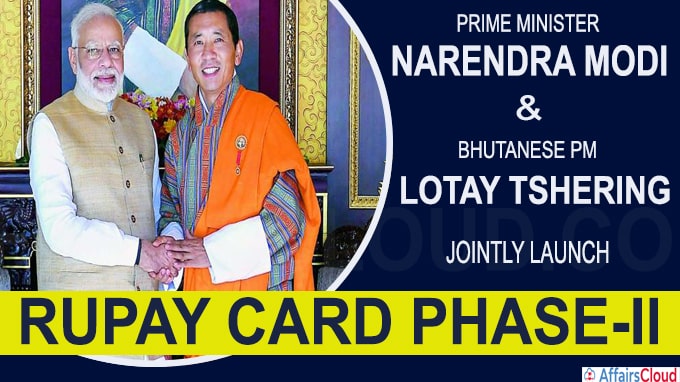 Through this initiative, Bhutanese people can access around one lakh ATMs (Automated Teller Machines) and 20 Lakh Point-of-Sale terminals (PoS) across India.

iii.Around 11, 000 successful transactions were done by Indians visiting Bhutan through Rupay Card issued by Indian Banks since the start of the initiative. The numbers were substantially low due to Pandemic.

RuPay is the first-of-its-kind Global Card payment network from India, launched by the National Payments Corporation of India on 26th March 2012. It is used widely at ATMs, PoS devices and e-commerce websites.

A Memorandum of Understanding (MoU) was signed between India and Bhutan for cooperation in the space sector to instill the knowledge of space, science and technology in children.

i.PM Modi extended his support for the establishment of an ICT (Information & Communications Technology)-enabled knowledge-based society in Bhutan.

iii.India, Bhutan are working rapidly to send Bhutan’s satellite to space with the help of ISRO (Indian Space Research Organisation) in 2021. For this purpose, Bhutan’s four space Engineers will go to ISRO in December, 2020.

i.The Ground Earth Station in Thimphu, Bhutan has been put to use for Bhutan Broadcasting and Disaster Management.

ii.In 2019, PM Modi inaugurated a Ground Earth Station in Bhutan at a cost of INR 7 Crores to help Bhutan take advantage of the South Asia Satellite launched by India in 2017.

i.On June 3, 2020 The Union cabinet chaired by the Prime Minister, Narendra Modi approved the Memorandum of Understanding(MoU) between India & Bhutan to improve cooperation in the areas of Environment.