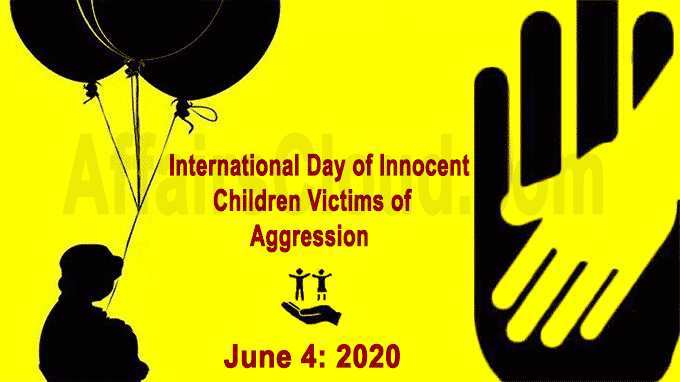 4th June of every year is observed as the International Day of Innocent Children Victims of Aggression decided by the United Nations General Assembly(UNGA) to acknowledge the physical, mental and emotional abuse on the children around the world

In the emergency special session on the questions of Palestine on 19th August 1982. The UNGA, horrified by the number of innocent children of Palestine and Lebanese Republic who fell victim to Israel’s aggressions in the 1982 Lebanon War and commemorated June 4th as the International Day of Innocent Children Victims of Aggression.

i.Following the Reports of Graca Marchel(https://undocs.org/A/51/306), on the impacts of armed conflicts on the children, the General Assembly adopted 51/77 Resolution on the Rights of the Child to provide protection to the children in the conflict situations in 1997.

ii.The new agenda of the 2030 Agenda for Sustainable Development provides the specific targets to eliminate the violence, abuse, neglect and exploitation against children.

i.The UN General Assembly (UNGA) created the Special Representative for Children and Armed Conflicts in 1996 to promote the collection of data on children affected by the war and to protect them.

ii.The UN Security Council (UNSC) included the issues faced by the children affected by the war in the Agenda of the Council by adopting the first resolution on Children and Armed conflicts in 1999.

iii.To report the violations against the children the Security council established the Monitoring and Reporting Mechanism (MRM) in 2005.

Six grave violations to report on violation against children: UN