External affairs minister Sushma Swaraj on a line of travel oftwo-nation (Moscow, Iran) visit, during which she will be present at the annual foreign ministers meeting of Russia, India and China.

The Foreign Minister’s Iran visit is aimed at stepping up commitment in a range of areas including oil and trade as the strategically important Persian Gulf nation is now ready to resume business as usual after lifting of sanctions under a historic nuclear deal. 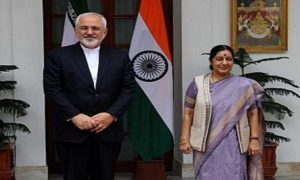 After Iran she will leave for a two-day trip to Moscow to attend the annual Foreign Ministers’ meeting of Russia, India and China.On the sidelines of event Swaraj is expected to meet her Chinese counterpart Wang Yi during which she is likely to raise the issue of China blocking India’s bid to ban Jaish-e-Mohammad chief Masood Azhar by the UN.

In the second meeting from India, Afghanistan and Iran was held in New Delhi to make a call on the text of the Trilateral Agreement among the three countries on Transport and Transit Corridors (Chabahar Agreement).