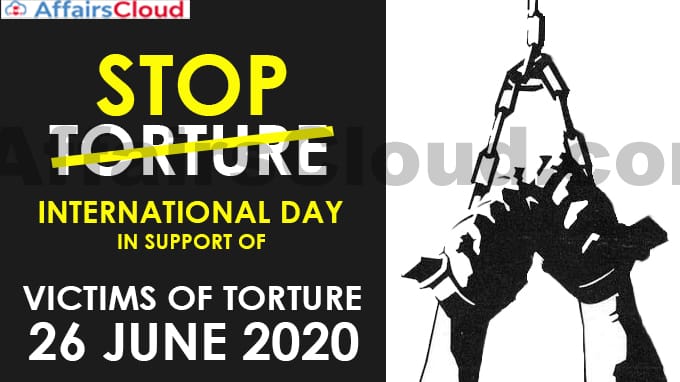 United Nations(UN) International Day in Support of Victims of Torture is observed annually on June 26 to raise awareness about the crime of torture. The day aims to honour, support the victims and survivors worldwide. The day intends to totally eradicate the torture.

The day serves as an opportunity to unite all stakeholders, including member states, civil society and individuals across the world to support many people worldwide who have been victims of torture and those who are still tortured now.

i.Organizations, like the International Rehabilitation Council for Torture Victims(IRCT) and Amnesty International, plays an active role in promoting the day through organising different events worldwide.

ii.The IRCT annually initiates global campaign to facilitate action of local groups and organisations around the world who work to support victims of torture and ill-treatment.

Reason for observance on June 26

i.The United Nations Charter was signed during the midst of World War II on June 26, 1945.

ii.United Nations Convention against Torture and Other Cruel, Inhuman or Degrading Treatment or Punishment came into effect on June 26, 1987

As per the Convention against Torture and Other Cruel, Inhuman or Degrading Treatment or Punishment, torture means any act by which severe pain or suffering, whether physical or mental, is intentionally inflicted on a person for any purpose, such as information or confession of a third party. It does not include pain or suffering that arise only from, inherent in or incidental to lawful sanctions.

i.The General Assembly adopted the Declaration on the Protection of All Persons from Being Subjected to Torture and Other Cruel, Inhuman or Degrading Treatment or Punishment in 1975.

ii.The United Nations Voluntary Fund for Victims of Torture was established by the General Assembly in 1981 to fund organizations  that support torture victims and their families.