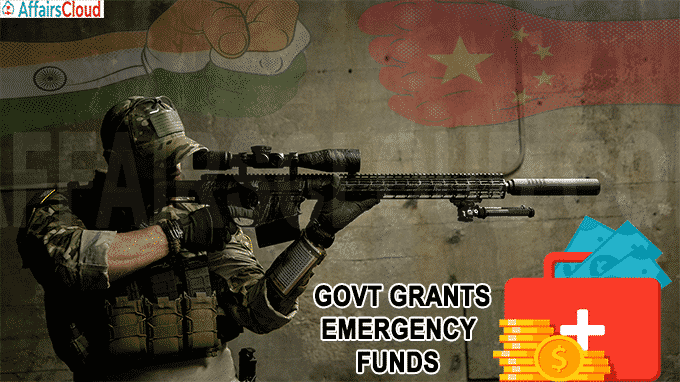 The Central Government has granted special financial powers of Rs 500 crore as emergency funds to armed forces for war preparedness amid ongoing border tensions with China. Under this financial aid, the three defence services (Indian Army, Indian Navy and Indian Air Force) can buy any weapon system or any in inventory upto Rs 500 cr in consultation with the Department of Military Affairs (DMA).

-As a part of financial power, the armed forces can procure weapons and military hardware at short notice to enhance their operational preparedness along the Line of Actual Control (LAC), a 3,500 km de-facto border between India and China.

-The government has also decided to relax certain rules to reduce delays in military purchases such as allowing procurement of required weapons and equipment from a single vendor.

The decision regarding this is taken, as the Indian and Chinese armies have been on a six-week standoff in several areas of eastern Ladakh. The ties between the two countries came under severe strain after the Chinese military killed 20 Indian Army personnel and injured around 76 in a violent clash in Galwan Valley on June 15, 2020.