Government of India has collaborated with US, Japan and Norway in the fields of health security, rail safety and health co-operation respectively. 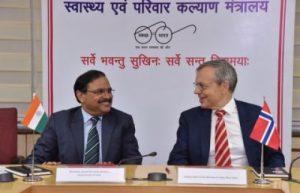 India and United States renew Commitment on Health security:
i.India and United States renewed their commitment to work together in the healthcare sector.
ii.This would provide better solutions to the health challenges faced by the people of both the countries.
iii.They would identify areas of mutual interest and promote development in areas like drugs for communicable and non-communicable diseases, low-cost innovations, food and drug regulations, traditional medicine, etc.

Cabinet approves agreements with other Nations