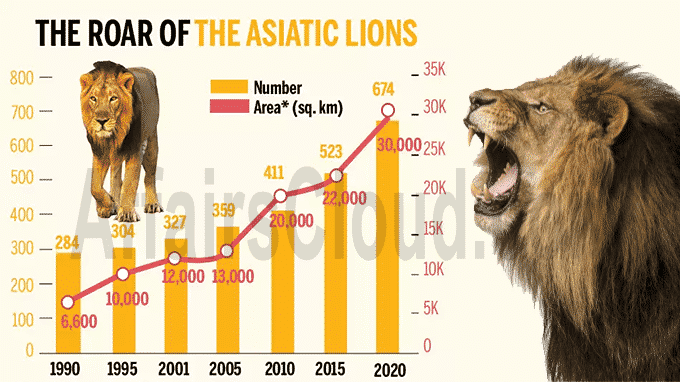 Note: This was an alternate approach for the counting of the Lion population instead of the Census in Gujarat’s Gir forest due to the COVID -19 pandemic requiring more officials for policing duties.

It is an observation method carried out monthly and during every full-moon, all the officers and field staff members assess the number of lions for 24 hours across various areas within their respective jurisdictions.

The exercise for the 2020 data included 10 districts where lions have been spotted over the years in 13 forest divisions which are a part of the Lion census.

i.The Asiatic lions are found in protected areas and agro-pastoral regions of Saurashtra covering about 9 districts in the Gir forest.

ii.According to Prime Minister Modi the steady rise in the population of lions is an influence of the community participation in wildlife health-care and the proper habitat management to minimize human-lion conflict and other conservative methods.

The Gir National Park and Wildlife Sanctuary is located in the Junagadh district of Gujarat. It is the largest compacted dry deciduous forest in the western region of India. It was declared a sanctuary in 1965. Is it the only place in the world to host the Asiatic lion, an endangered animal species.

It also houses a number of species of exotic birds and animals in its flourishing flora and fauna. It covers about 1153.42 sq. km area out of which an area of 258.71 sq. km. was declared a National Park.