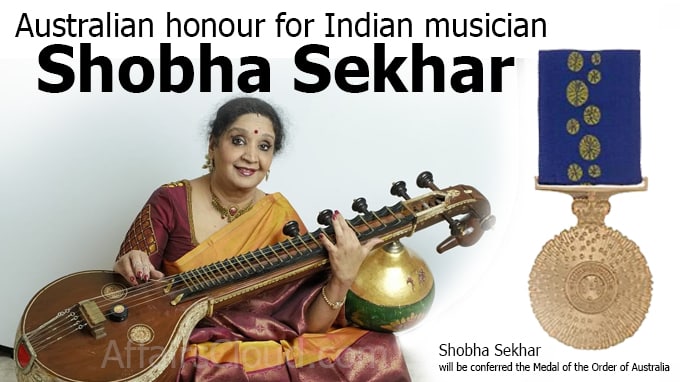 Indian Musician Shobha Sekhar, the founder of Kalakruthi a music organisation in Australia receives the Medal of the Order of Australia(OAM) in the Queen’s Birthday 2020 for her service to Indian music and dance.

i.Shobha Sekhar is a management graduate and an artist based in Montreal

ii.she works as a lecturer at the University of Melbourne.

iv.She started the Kalakruthi in 1994 affiliated with The Music Academy, Chennai and has been training many aspirants of Carnatic music.

v.She had conducted several concerts in Australia and all around the world.

vi.She had contributed to many charity initiatives and conducted music and dance programmes to raise funds for the victims of the Victoria Bushfire.

The Medal of the Order of Australia:

i.The medal of the order of Australia is awarded to the individuals contributing to their community or to Australia globally or domestically.

ii.The recipients are nominated and assessed independently as worthy of recognition.

Other Indian Origin Recipient of Medal of the Order of Australia: