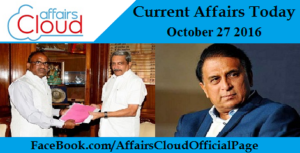 Union Cabinet Approvals – October 27 2016
i. Union Cabinet has cleared 2 percent hike in Dearness Allowance (DA). The hike will be effective from July 2016.
ii. Union Cabinet under the Chairmanship of Prime Minister Shri Narendra Modi has approved the establishment and operationalisation of a National Academic Depository (NAD), which is aimed at bringing another dimension and enhancement of the vision of Digital India.
iii. Union Cabinet, chaired by Prime Minister Narendra Modi, has approved an agreement on trade, commerce and transit between India and Bhutan.
iv. Cabinet gave in-principle approval to strategic stake sales in some state-owned companies on the recommendations of the government think tank NITI Aayog. Union Government, has submitted its report to Defence Minister Manohar Parrikar
ii. The Central Government had appointed the committee under the Chairmanship of Justice L Narasimha Reddy, retired Chief Justice of Patna High Court to look into the anomalies, if any, arising out of implementation of OROP.
iii. The committee was formed to suggest measures for the removal of anomalies that might arise out of inter-services issues of the three armed forces due to implementation of OROP
iv. The OROP scheme goal to provide ex-servicemen of same rank and same length of service uniform pension regardless of date of retirement, provided that the ex-servicemen concerned had retired from the same rank and they had served for an equal number of years.

Haryana to observe 2017 as ‘GaribKalyanVarsh’
i. Haryana Chief Minister Manohar Lal Khattar announced that the state government has decided to observe 2017 as the “GaribKalyanVarsh”, with schemes to be spread next year for the poor.
ii. During the era of GaribKalyanVarsh, the government would lay confirm on welfare of poor people and generating employment opportunities for the youth
iii. Khattar, who completed two years in office the outgoing year was dedicated to Pt Deendayal Upadhyaya and accrued with the Golden Jubilee formation year of the state, established at Punjab in 1966.
iv. He claimed that he has provided good governance while making efforts to ensure transparency. Also, efforts have been made to streamline the systems which were creating problems for the people 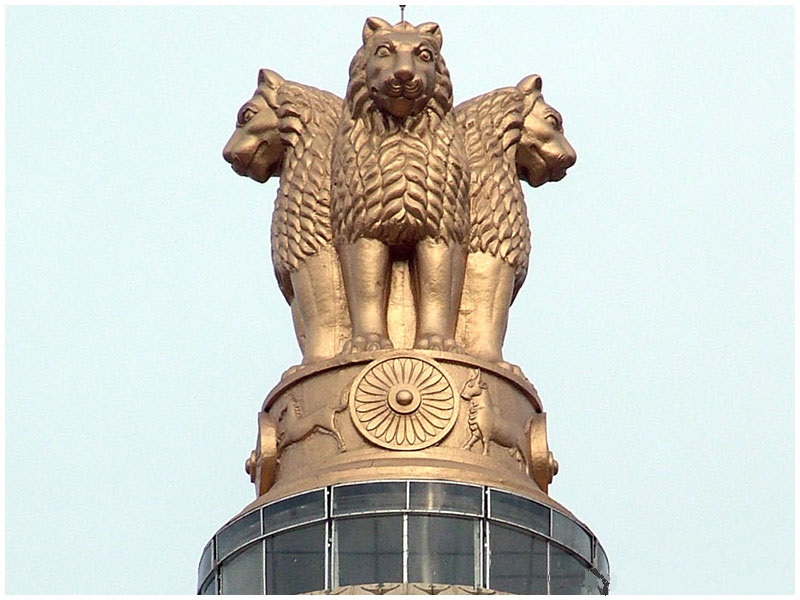 India-China Cooperation Forum meet held in Shanghai
i. More than 100 students and entrepreneurs from Indian and Chinese businesses took part in the 5th edition of the India-China Cooperation Forum in Shanghai to boost bilateral trade and increase investments in crucial sectors.
ii. Mr. Narendra Modi, Prime Minister of the Republic of India, is currently paying an official visit to China at the invitation of H.E. Mr. Li Keqiang, Premier of the State Council of the People’s Republic of China. Prime Minister Modi turned on H.E. Mr. Xi Jinping, President of the People’s Republic of China and held talks with H.E. Mr. Li Keqiang, Premier of the State Council
iii. Leaders of the two countries discussed the progress of bilateral relations. The two sides shared the view that President Xi’s visit to India in September 2014 was a significant milestone in the development of bilateral relations.

India, Russia to hold discussions on deepening military co-operation
i. India and Russia would hold detailed discussions on deeper military cooperations, specifically on joint production of fifth generation fighter aircraft, upgradation of Su-30 MKI planes and firming up the contract for the S400 Triumf air defence system.
ii. Russian Defence Minister Sergei Shoigu will co-chair a meeting of the Indo-Russian Inter Governmental Commission on Military Technical Cooperation (IRIGCMTC)with his Indian counterpart Manohar Parrikar.
iii. Both countries had firmed up plans to acquire the air defence system and other deals which were recently signed on the sidelines of the BRICS meet in Goa.
iv. Sergei Chemezov, CEO of Rostec State Corporation, a Russian coordinating organisation of 700 hi-tech civilian and military firms, had announced that they expect the agreement on fifth generation fighter aircraft (FGFA) to be finalized.

Kyrgyzstan govt resigned after coalition collapse
i. The government of Kyrgyzstan resigned after the president’s party quit the ruling coalition, inducing fears the Central Asian country could plunge into instability.
ii. President Almazbek Atambayev signed an order on his government’s resignation, the president’s website announced. The government’s resignation was due to the collapse of the coalition of the parliamentary majority.
iii. The proposed amendments raised concerns among the opponents, who claimed Atambayev would go on to take the role of the prime minister after his presidential term ends next year.

Gambia is latest African nation to quit international criminal court
i. Gambia has announced that it will withdraw from the International Criminal Court, the third African country to declare its departure
ii. The announcement came after similar decisions this month by South Africa and Burundi.
iii. The ICC, set up in 2002, is often accused of bias against Africa and has also struggled with a lack of cooperation, including from the US, which signed the court’s treaty but has never ratified it.

attended the 23rd Rehabilitation International World Congress at Edinburgh, Scotland, being held from 25-27 October,2016.
ii. The Theme of the Congress is, “Create a More Inclusive World”.
iii. The Congress is being attended by more than 1000 delegates from 65 countries.
iv. While addressing the Congress on 25th October, 2016, the Minister for SJ&E stated that, The Government has renamed Persons with Disabilities as ‘Divangjan’ for their development.”

MMTC ties up with banks to sell Indian Gold Coin
i. State-run trading firm MMTC has tied up with seven banks, including ICICI and HDFC Bank, to sell government minted ‘Indian Gold Coin’
ii. The coins are currently available at all MMTC outlets across India along with select branches of seven banks –Indian Overseas Bank, Vijaya Bank, Federal Bank, Yes Bank, Andhra Bank, ICICI Bank and HDFC Bank.
iii. Indian Gold Coin was launched by PM Narendra Modi on November 5, 2015. It is India’s first ever sovereign gold offering and only gold coin hallmarked by Bureau of Indian Standards (BIS) for purity.
iv. The Indian Gold Coin is available in denominations of 5 gm and 10 gm coin and 20 gm bar and is available at about 383 MMTC outlets across India.

YES Bank partners with ToneTag for sound-based payments
i. YES Bank has tied up with ToneTag, a Mobile payment solutions startup to integrate and

UP Government confers Yash Bharti award to 54 people
i. The Government of Uttar Pradesh announced the names of 54 eminent personalities who have been selected for the award in recognition of their contributions in their respective field.
ii. Uttar Pradesh’s highest honour Yash Bharti award will be given to 54 personalities. Among them, nine Muslims were conferred the award by Chief Minister Akhilesh Yadav in presence of Mulayam Singh Yadav. The award is given annually by Culture Department of UP government.
iii. Yash Bharti comes with a cash prize of Rs 11 lakh, citation and a shawl. The awardees are also eligible for a monthly pension of Rs 50,000 for their life.
iv. Yash Bharti award were constituted in 1994 by the then CM Mulayam Singh Yadav but were discontinued between 2007 and 2012 by Mayawati. It has since been revived by CM Akhilesh Yadav.

Sunil Bharti Mittal Becomes The First Indian to be Elected Chairman of GSMA
i. The GSMA announced that it has elected Sunil Bharti Mittal, Founder and Chairman, Bharti Enterprises, as Chairman for the two-year period from January 2017 through December 2018.
ii. He will oversee the strategic direction of the organisation, which represents nearly 800 of the world’s mobile operators, as well as more than 300 companies in the broader mobile ecosystem.
iii. The GSMA also elected the new members of the 26-member Board and re-elected Mari-Noëlle Jego-Laveissiere, Executive Vice President, Innovation, Orange Group as Deputy Chair for the two-year period. 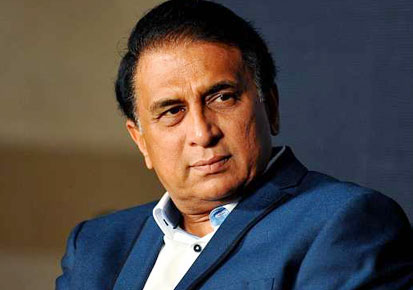 i. Former Cricketer Sunil Gavaskar has been named as the ‘Stroke Ambassador for India’.
ii. The announcement was made at the inaugural function of 10th World Stroke Congress (WSC) by Indian Stroke Association which is hosting the event along with World Stroke Organisation, a World Health Organisation-affiliated NGO dedicated to the global fight against stroke.
iii. World Stroke Day is observed every year on October 29. WSC, organised once in two years, is being held in India for the first time.

FIH appoints Jason McCracken, former Olympic and World Cup umpire, as new CEO
i. The International Hockey Federation (FIH) has appointed New Zealand’s Jason McCracken as its chief executive officer(CEO) and he will take over on February 2017.
ii. He will be leaving his role as head of insurance and investment risk at banking group ANZ to take up his new post at FIH’s headquarters in Lausanne, Switzerland.
iii. He will replace Kelly Fairweather, who is leaving for the International Tennis Federation after six years in the role.

Ericsson’s Board names Borje Ekholm new President and CEO
i. Swedish telecom gear maker Ericsson has appointed Borje Ekholm as its next President and CEO, effective from January 16, 2017.
ii. The post become vacant after global CEO Hans Vestberg stepped down from the company in July 2016 after Ericsson declared 11 per cent decline in sales in the second quarter result.
iii. Ekholm is currently serving as CEO of Patricia Industries. He is also serving on Ericsson’s Board of Directors for the past 10 years which will help him to understand the challenges and the opportunities Ericsson currently facing.

Legendary Kashmiri Singer Raj Begum Dies At 89
i. The Nightingale of Kashmir, Raj Begum, who enthralled millions with her mellifluous voice for more than seven decades, passed away after a long time illness. She was 89.
ii. She started at a time when women were not even allowed to move out of their homes. Her contribution only allowed female singers to come out and make their mark.
iii. Begum was honoured with a Padma Shri in 2002 and the Sangeet Natak Akademi award in 2013.

World Day for Audiovisual Heritage – October 27
i. Audiovisual documents, such as films, radio and television programmes, are our common inheritance and contain the important records of the 20th and 21st centuries.The 2016 Theme is “It’s Your Story – Don’t Lose It”
ii. They help to maintain the cultural identity of a people; but countless documentary treasures have disappeared since the invention of image and sound technologies that permit the peoples of the world to better share their experiences, creativity and knowledge.
iii. They are extremely vulnerable and it is measured that we have no more than 10 to 15 years to transfer audiovisual records to digital to prevent their loss.
iv. The World Day for Audiovisual Heritage takes place every 27 October. This commemorative day was chosen by UNESCO (the United Nations Educational, Scientific and Cultural Organization) in 2005 to raise of awareness of the significance of and preservation risks recorded sound and audiovisual documents