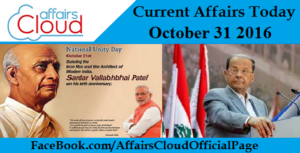 Maharashtra most farmer friendly state: NITI Aayog Index
i. According to NITI Aayog’s index on reforms in the farm sector, Maharashtra has been adjudged the most farmer friendly state in the country followed by Gujarat and Rajasthan.
ii. The Index is aimed at helping the states to identify and address problems in the farm sector, which suffer from low growth, low farm income and agrarian distress.
iii. Maharashtra ranked first with  81.7 and Gujarat was second at 71.5, Puducherry, Delhi and Jammu & Kashmir got the lowest three grades, of 4.8, 7.3 and 7.4, respectively.
iv. The Aayog’s ‘Agriculture Marketing and Farmer Friendly Reforms Index’ was based on initiatives taken by the states in implementing farm sector reforms. 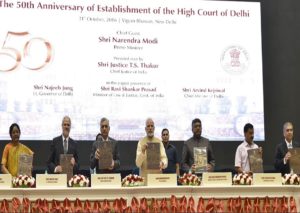 ii. Narendra Modi appealed Sardar Vallabhbhai Patel’s birth anniversary by stating Sardar gave the direction to a huge movement. He added that the country bows in front him for his contributions.
iii. The Prime Minister praised the legal brotherhood for giving strength to Alternative Dispute Resolution mechanisms. Mentioning emerging challenges before the judiciary, he called for the preparation of a roadmap for the future. .
iv. Sardar Vallabhbhai Patel  was  born on 31 October 1875  was an Indian barrister and statesman, one of the leaders of the Indian National Congress and one of the founding fathers of the Republic of India.

Arun Jaitley releases Rs 1,093 cr for restoration of infra in J&K
i. Finance minister Arun Jaitley released first instalment of special assistance of Rs 1,093.34 crore out of Rs.2000 crore to Jammu & Kashmir for repair and permanent restoration of damaged public buildings such as such as schools, colleges, hospitals, bus stations under Prime Minister Reconstruction Plan which was announced on November 7, 2015
ii. On October 27, 2016, union government approved one-time relaxation of Mission for Integrated Development of Horticulture (MIDH) cost norms for restoration of damaged horticulture areas and development of horticulture in J & K 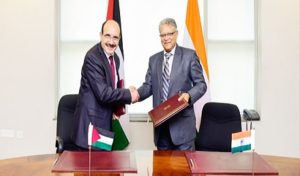 300 million children live with polluted outdoor air: UNICEF Report.
i. Some 300 million children live with outdoor air so polluted it can cause serious physical damage, including affecting their developing brains ,a study was released by the United Nations.
ii. More or less one child in seven around the globe breathes outdoor air that is minimum six times dirtier than international recommendations, according to the study by the U.N. Children’s Fund, which called air pollution a leading factor in child mortality.
iii. The study, using satellite data, is the first to make a global estimate of exposure and indicates that almost 90% of the world’s children – 2 billion – live in places where outdoor air pollution exceeds World Health Organisation (WHO) limit.
iv. UNICEF warned the levels of global air pollution contributed to 600,000 child deaths a year – more than are caused by malaria and HIV/Aids combined.

10th Indo-Nepal Joint Exercise Surya Kiran Commenced
i. A 14-day India-Nepal joined military exercise, named Surya Kiran X, began at Saljhandi, Nepal. The exercise would end on 13th November 2016.
ii. To enhance defence co-operation relations with Nepal, an Indo-Nepal joint Military exercise Surya Kiran-X commenced at Army Battle School in Nepal.
iii. The aim of this exercise is to conduct battalion level joint training with special importance on Counter Terrorism in mountainous terrain
iv. Featuring  Disaster Management have also been included in the exercise. It is the tenth in 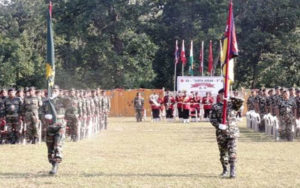 the series of such exercise between the two nations which would last for 14 days starting from October 31, 2016.
Nepal:
♦ Capital: Kathmandu
♦ Currency: Nepalese Rupee
♦ Prime Minister: Pushpa Kamal Dahal

Ease of Doing Business: A.P and Telangana top in 2016 all-India ranking
i. Andhra Pradesh and Telangana have jointly topped the ease of doing business ranking in the list prepared by the World Bank and the Indian government’s department of industrial policy and promotion for 2016.
ii. Gujarat has slipped to the third position in the list and Chhattisgarh, Madhya Pradesh and Haryana occupied the fourth, fifth and sixth slots in the index based on the degree of implementation of the government’s 340-point Business Reform Action Plan.
iii. It is noted that Last year, only seven states implemented more than 50% of the reforms proposed. This year, 17 have implemented more than 50% of the 340 reforms listed by DIPP. 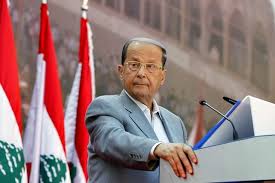 iii. President post is vacancy since May 2014, because of divided political powers were repeatedly unable to reach consensus on a candidate for president
Lebanon :
♦ Capital: Beirut
♦ Currency: Lebanese pound

Scientists discovered way to turn carbon dioxide into useful fuel
i. US scientists say they have shocked upon an economically practical and highly efficient way of converting a greenhouse gas largely reasoned for global warming into an environmentally friendly fuel – a development that could increase the renewable energy industry.
ii. Researchers from the Oak Ridge National Laboratory in the US state of Tennessee announced they “serendipitously” developed a catalyst that transformed carbon dioxide (CO2), a main greenhouse gas, into high yields of
iii. Rondinone and his colleagues had grouped a catalyst using carbon, copper, and nitrogen, by embedding copper nanoparticles into nitrogen-laced carbon spikes measuring just 50-80 nanometres tall. (1 nanometre = one-millionth of a millimetre.)
iv. The researchers explain that they were able to achieve such high yields because the nanostructure of the catalyst was easy to influence and adjust to get the desired results. 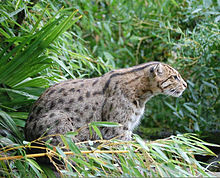 iii. Mr. Appa Rao has been engaged in studying the movements of the cat in the mangrove cover. Its presence was proved through the camera trap arranged in the mangrove forest.
iv. The fishing cat (Prionailurus viverrinus) is a medium-sized wild cat of South and Southeast Asia. In 2016, the IUCN classified the fishing cat as Vulnerable. Fishing cat populations are threatened by destruction of wetlands and declined severely over the last decade.
v. Fishing cats live foremost in the vicinity of wetlands, along rivers, streams, oxbow lakes,
in swamps and mangroves. The fishing cat is the state animal of West Bengal.

Scientists developed new arhar variety pigeon-pea
i. Scientists at the Indian Agricultural Research Institute (IARI) have developed a new arhar (pigeon-pea) variety that matures in 120 days, gives the same 20 quintal-per-hectare yields of normal 160-180 day plants and is, moreover, amenable to mechanical combine harvesting.
ii. The average yield of existing pulses varieties in the country is 9-10 quintals a hectare, but the new variety developed by IIPR scientists has the potential to give 20 quintals.
iii. The pulses variety took a long time to get commercialised as a lot of changes were made in properties. Arhar (tur) is mostly grown in Maharashtra, Madhya Pradesh and Karnataka, while it is used almost in all parts of the country.
iv. Rating agency CRISIL showed that 70 per cent of India’s annual pulses production comes from the four states of Madhya Pradesh, Maharashtra, Rajasthan and Uttar Pradesh.
v.Arhar prices extended to high of Rs 200 a kg a few months ago due to shortage in supplies. India produced 17.34 million tonnes (mt) of pulses in 2014-15 crop year, around 1.82 mt less than last year. Of this, arhar production was 0.43 mt less. 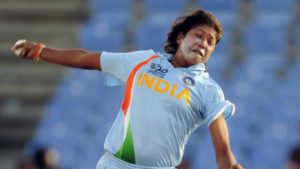 ii. She has achieved the ICC number one bowler’s rank, having earned 730 points. Jhulan has already been ICC number one bowler a couple of years ago. She was named ICC player of the year.
iii. Jhulan received the news that she has taken a lead over West Indies’ Stephanie Taylor and became number one ICC bowler. Stephanie has earned 659 points.
iv. This is the 3rd time when the 33-year old bowler has climbed at the top of ICC rankings. India is at number five in the ICC women’s team ranking. Jhulan devoted to her new achievement to her coaches, family members as well as her teammates.

World’s Oldest Active Theater Actor Zeldin Died At 101
i. The wife of Russian actor Vladimir Zeldin, who has been described as the world’s oldest working actor stated that he has died in Moscow. He was 101.
ii.Russian news agencies quoted that he  died in a Moscow hospital. The actor shot to stardom with the role of a shepherd in “They Met in Moscow.”
iii. The shooting started a few months before the German invasion of the Soviet Union in 1941. The 26-year old Zeldin was enlisted and sent to the front line before Josef Stalin’s order recalled him to Moscow to continue the shoot.
iv. Vladimir Mikhailovich Zeldin was born on 10 February 1915 .He was a Russian theatre and cinema actor and a centenarian.
v. Zeldin was born in the town of Kozlov (now Michurinsk). In 1935 he graduated
from the theatre college at the Mossovet Theatre and became its actor. For over 60 years he has been working in the Russian Army Theatre, Moscow.

Sardar Vallabhbhai Patel – 141st birth anniversary observed on October 31, 2016
i. Prime Minister Narendra Modi honoured Sardar Vallabhbhai Patel on the occasion of his 141st birth anniversary in New Delhi on October 31, 2016.
ii. The Rashtriya Ekta Diwas(National Unity Day) was observed on 31stOctober, 2016 with ‘Integration of India’ as the theme
iii. Vigilance Awareness week observed every year from October 31 to November 5 to promote probity in public life and to achieve a corruption free society. `2016 Theme : “Public participation in promoting integrity and eradicating Corruption” ii. The Day is expected to greatly promote the international community’s interest in global urbanization
iii. 2016 Theme: “Inclusive Cities, Shared Development” to highlight the important role of urbanization as a source of global development and social inclusion.