According to NITI Aayog’s index on reforms in the farm sector, Maharashtra has been adjudged the most farmer friendly state in the country followed by Gujarat and Rajasthan.

NITI Aayog’- National Institution for Transforming India is a Government of India policy think-tank established by the Narendra Modi government to replace the Planning Commission.

The Index is aimed at helping the states to identify and address problems in the farm sector, which suffer from low growth, low farm income and agrarian distress. 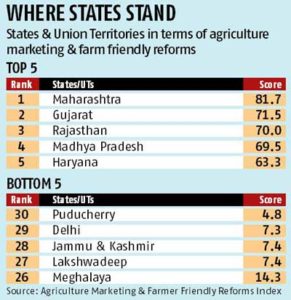