Andhra Pradesh and Telangana have jointly topped the ease of doing business ranking in the list prepared by the World Bank and the Indian government’s department of industrial policy and promotion for 2016.

About Ease of Doing Business Index :

Gujarat has slipped to the third position in the list and Chhattisgarh, Madhya Pradesh and Haryana occupied the fourth, fifth and sixth slots in the index based on the degree of implementation of the government’s 340-point Business Reform Action Plan. 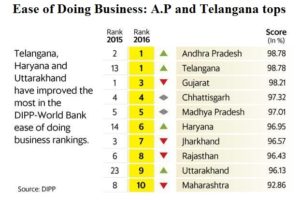 About Andhra and Telangana :

Andhra Pradesh is one of the 29 states of India, situated on the southeastern coast of the country. The state is the eighth largest state in India covering an area of 160,205 km2 (61,855 sq mi).