The 2030 Water Resources Group (2030WRG) will help the Maharashtra Government to raise $270 million from the Green Climate Fund, which will be invested in integrated watershed programmes in the state.

What is Green Climate Fund? 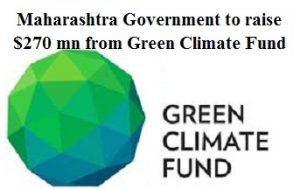 in adaptation and mitigation practices to counter climate change.

For raising money from the Green Climate Fund, Maharashtra State Level Climate Change Committee will endorse the proposal next week, after which it would be referred to the Central Government. The approvals will be in place in early 2018 and it could take a year to get the funding.