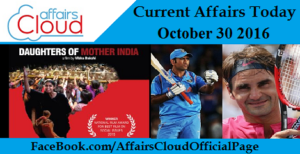 Cabinet approves New Productivity Linked Reward Scheme for port and dock workers
i. The Union Cabinet chaired by PM Narendra Modi has given its approval to New Productivity Linked Reward(PLR) Scheme for all Major Port Trusts and Dock Labour Board employees/workers for the years 2015-16 to 2017-18.
ii. The new PLR scheme will benefit about 37870 Port and Dock workers/employees in all the Major Port Trusts and the yearly outgo will be Rs. 49.58 crore.
iii. It will be calculated on the enhanced wage ceiling for calculation of Bonus at Rs. 7000/- per month.
iv. It shall be paid annually on the basis of 50% weightage given to all India Performance and 50% weightage given to the individual Port Performance.
v. It will foster better industrial relationship and congenial work atmosphere in the Port Sector, apart from stimulating better productivity.
For the year 2014-15, an amount of Rs 25.93 crore has already been paid to about 41,492 Major Ports & Dock workers/employees as per wage ceiling of Rs.3500/.

Inter-state council reconstituted by Prime Minister Modi
The Inter-State Council has been reconstituted by PM Narendra Modi to facilitate coordination between states and the centre.The new list excludes Smriti Irani, D.V. Sadananda Gowda and HRD Minister Prakash Javadekar is included in the list.
Inter-state council Members :
i. Prime minister as chairman and chief ministers of all states and union territories, six 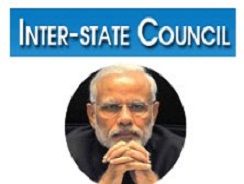 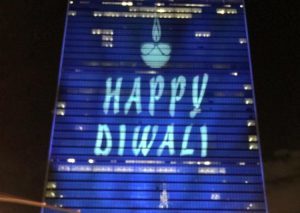 ii. The UN headquarter in New York was lit up and displayed a lamp with the message of “Happy Diwali” written in blue light to celebrate the spirit of the festival.
iii. India’s Ambassador to the UN Syed Akbaruddin tweeted and thanked General Assembly President Peter Thomson for the initiative.
iv. He also tweeted a picture of passersby clicking photographs of the building as well as being themselves clicked against the illuminated U.N. headquarters in the background.

SBI cut lending rate by 0.15% and ICICI by 0.10%
i. The State Bank of India announced a cut of 0.15% in its benchmark lending rate under a new system of calculation, signalling a further implement in borrowing costs ahead of the busy season. 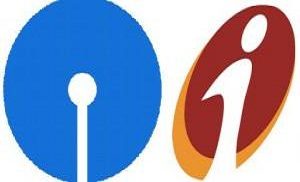 ii. Private sector lender ICICI Bank was the first to announce a cut of 0.10% in its marginal cost of funds based lending rate (MCLR) across tenors, which was followed by a similar move by the country’s largest lender SBI, but of a larger measure of 0.15%.
iii. The revised rates are effective from November 1 in case of both the banks. SBI has kept the  overnight MCLR, which is the most aggressive offering, at 8.65 per cent, while the one month is at 8.75 per cent.
iv.The announcements come after repeated displeasure shown by the regulator for not passing on the benefits of cuts to borrowers and give a boost to the sagging economic growth.

Three Maharashtra women awarded the title of “Swachhatadoot” for their inspiring role
i. Three women from Maharashtra SuvarnaLokhande, Sangeeta Awhale & Chiatali Rathod were conragulated & honored by MC granting title of “Swachhatadoot”.
ii. They can become agents of change and can reach to many others with their own experience. They have become the role models to many who want to bring this kind of a change in their lives.
iii. Against all odds, three enterprising ladies from Maharashtra have taken the initiative of building toilets for their families by making them understand the importance of hygiene.
iv.UnderSwachh Maharashtra Mission, these three brave women namely, SuvarnaLokhande from Sinnar -Nasik district, Sangeeta Awhale from Saikheda- Washim district, and ChiataliRathod from Mozar – district Yavatmal, were congratulated and honored by the Municipal Corporation by granting them the title of “Swachhatadoot”. 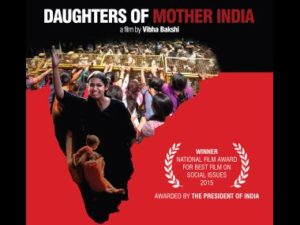 ii. The fest was organised by Arabic Egyptian Society for Culture, Media and Arts (CMA).This film was Directed by Vibha Bakshi, the movie portrays India’s story of determination, hope and courage in the fight against gender violence.
iii. The fest is organised annually to promote cinema as a means of combating ignorance, poverty and terrorism. The 2016 edition featured around 92 films from 33 countries in three categories: Short Fiction, Documentary and Animation.
iv. India was the Guest of Honour in the film gala with 12 entries.It frames the aftermath of the 2012 Nirbhaya gang-rape and murder.

Mariano Rajoy re-elected as Spanish Prime Minister
i. Mariano Rajoy took office for a second term as Spain’s prime minister overcoming a 10-month leadership impasse but heading a minority government with little maneuvering room to pass legislation.
ii. The Popular Party leader needed to receive more votes in his favour than against, and the Socialist Party’s (PSOE) refusal to vote meant he received enough support from the Congress members to be invested.
iii. He received 170 votes in his favour, while 111 voted against his re-election and 68 were non-votings. Mr.Rajoy’s victory was made possible by PSOE’s decision to abstain instead of continuing to vote against him. 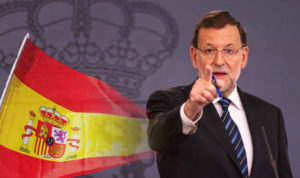 iv. Spain had been involved in a political crisis for the last 10 months after two national elections yielded no conclusive results and several attempts at negotiating and forming a government failed.
Spain :
♦ Capital: Madrid
♦ Currency: Euro

Upadhyay re-appointed as Nepal’s envoy to India
i. Nepal has re-appointed Deep Kumar Upadhyayas its representative to India, nearly six months after he was recalled by the previous K P Oli-led government over charges of ‘non-cooperation‘ and involving in ‘anti-government’ activities. Upadhyay would enjoy the diplomatic ranking of a Cabinet Minister.
ii. He was serving as Nepal’s Ambassador to India since April 2015. He was suddenly recalled by the erstwhile Oli government on May 6.
iii. The Oli-led government had smoothened three charges against Upadhyaya to justify its decision to recall him and officials reported that he was working ‘against national interest’.
iv.Upadhyay, a leader of Nepali Congress, was seen as the first casualty of the cancellation of Nepalese President Bhandari’s planned visit to India.
v. Paudyal is a former Chief Secretary of the government of Nepal. The Council of Ministers on September 1 had recommended the duo for the key diplomatic outposts in Nepal’s neighbourhood.

Ashok Chawla Took Over As Non-Executive Chairman Of Yes Bank
i. Yes Bank, India’s fifth largest private sector Bank announced the appointment of Mr. Ashok Chawla as an Additional Director (Non Executive).YES BANK has also applied to the Reserve Bank of India to seek approval on the appointment.
ii. Chawla, who has also served as Union Finance Secretary, took over after holding the post by Radha Singh ended her term as the bank’s director.
iii. Mr.Ashok Chawla was the Chairman of the Competition Commission of India (CCI). Mr. Chawla has been a distinguished civil servant with over 40 years of experience in various sectors of the economy in India as well as in International Multilateral agencies.
iv. He had also held important positions in the corporate sector. He has been Chairman and 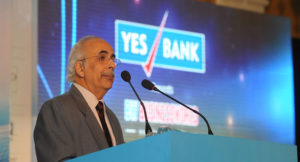 Soyuz MS-01 successfully landed on Earth with 3 on-board
i. The landing module of the Russian spaceship Soyuz MS-01 successfully placed in the steppes of Kazakhstan with three crew members on board was stated by Russian Mission Control Centre.
ii. Astronauts Anatoli Ivanishin, Takutya Onishi and Kathleen Rubins, of Russia, Japan and the US respectively, returned to Earth after completing a nearly four-month mission on the International Space Station (ISS).
iii. The MS-01, the first ship of the new Soyuz model, landed about 140 to 150 km southeast of Zhezkazgan city. During their tenure on the orbital platform the three astronauts performed about 40 scientific experiments.
iv. The International Space Station, a project involving 16 nations, is currently made up of 14 permanent modules and orbits at a speed of more than 27,000 km per hour at a distance of 400 km from Earth.

Forbes Fab 40 List – MS Dhoni Still No 1 Indian Athlete
i. In the latest Forbes Fab 40 2016 list of the biggest sports brands in the world, Dhoni is slated at No 10th spot in the top 10 athletes and he remains the most valued Indian athlete in 2016
ii. The list is topped by tennis legend and 17-time Grand Slam winner Roger Federer.
iii. With a brand value of $36 million, Federer gained two notches from third last year, while Woods dropped four spots to stand fifth on the latest edition of the list. Among other top athletes on the list is Argentine football star Lionel Messi, ranked eighth. He was not among the top 10 last year.
iv. To 10 Brands:Nike, ESPN, Adidas, Under Armour, Sky Sports, UFC, MLBAM, YES, Reebok and NESN 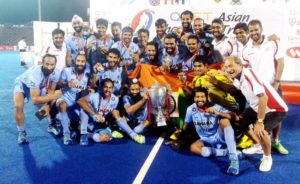 Lumpur, Malaysia on October 30, 2016.
ii. World No 6, India had won the inaugural edition of the Asian Champions Trophy by defeating Pakistan in the final in 2011.This is the second time India have won the Asian Championship title.
iii. Goals from Rupinder Pal Singh (18th minute), Yousuf Affan (23rd) and Nikkin Thimmaiah (51st) helped India surmount the challenge from Pakistan, who rallied from two goals behind through strikes by Muhammad Aleem Bilal (26th) and Ali Shaan (38th) in the title clash of the fourth edition of tournament.

Sania retains World No.1 status for second successive year
i. India’s tennis star Sania Mirza retained her numero uno status in women’s doubles for the second consecutive year.
ii. During the year, Sania has won titles, including Australian Open with Hingis, Cincinnati Masters with Barbora Strycova.
iii. Sania had split with Hingis but they paired up and made an unsuccessful bid to defend the WTA Finals in Singapore.

ii. Sovann was the country’s first post-Khmer Rouge prime minister.
iii. He was removed from power by the Vietnamese in 1981 and he was imprisoned for 10 years in Hanoi.
iv. He founded the Cambodian National Sustaining Party, which took part in the 1998 election but did not win a seat in parliament. He joined the opposition Cambodia National Rescue Party in 2012 and won a parliamentary seat in the last general election in 2013.
v. Later he returned amid the Vietnamese military invasion that toppled the Khmer Rouge.