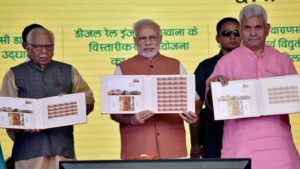 ii. Modi launched “Urja Ganga”, 1500 km long gas pipeline project which costing Rs 51,000 crore  to provide piped cooking gas to residents of Varanasi within two years.
iii. He flagged off projects like doubling of railway tracks on the busy Allahabad—Varanasi section and expansion of the Diesel Locomotive Works (DLW) besides laying foundation stone for a fully air-conditioned perishable cargo centre in Varanasi
iv. He also release a stamp dedicated to the ancient temple town, which is believed to be among the oldest surviving ones in the world
v. He laid the foundation stone for widening of a road passing through the city’s crowded Cantonment area.

Government to fast-track Indus basin irrigation projects
i. Central government is planning to fast-track four projects in Indus river basin to increase irrigation area in Jammu and Kashmir by nearly 2.05 lakh acres.
ii. PM Modi had chaired a meeting to review the 56-year-old Indus Waters Treaty (IWT) last month.
iii. Out of four three projects are -Tral Irrigation Project in Pulwama, Prakachik Khows Canal in Kargil and restoration and modernisation of main Ravi Canal in Jammu’s Sambha and Kathua– are expected to be completed by this fiscal.
iv. The fourth project of Rajpora Lift Irrigation is planned to be completed by December 2019.

Western Zonal Council Meeting held in Mumbai
i. The 22nd meeting of the Western Zonal Council was held in Mumbai, Maharashtra.The meeting was held under the chairmanship of Union Home Minister Shri Rajnath Singh.The meeting was attended by the Chief Ministers and Ministers of these States and Administrators of Union Territories as well as senior officers of Central and State Governments. 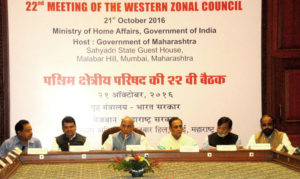 ii. The Council reviewed the progress of implementation of the recommendations made in the last meeting.
iii. Important issues discussed in the meeting are Pradhan Mantri Awas Yojna (Urban) Mission, surplus lands of Central Government for Housing for All : 2022 and providing shelters to the urban homeless.
iv. Issues relating to setting up of Regional Development Authority for development of infrastructure in the region, setting up of international museum of Indus Valley civilization in Kutch District was also discussed.
Western Zonal Council :
Maharashtra, Gujarat, Goa and Union Territories of Daman & Diu and Dadra & Nagar Haveli

‘Sonpur’ becomes India’s first ‘Happiness Junction’
i. First ‘Happiness Junction’ of India was inaugurated in Bihar’s Sonepur railway station of the East Central Railway (ECR) by Sonepur Divisional Railway Manager (DRM) Manoj Kumar Aggarwal.
ii. Sonepur junction will have the several books and several entertainment tools for waiting passengers.Besides with TV, journals and a kids zone are also will available.
iii. This facility would be extended in other stations of the division soon.
Bihar :
♦ The Bihar plain is split by the river Ganges.The state is divided into 9 divisions and 38 districts
♦ Jharkhand was seperated from Southern Bihar and formed a new state on November 15, 2000.

Indian Army team wins gold medal in gruelling Cambrian Patrol exercise
i. India Army team has won a gold medal at Exercise Cambrian Patrol which was organised by the British Army in Wales.The Indian Army team presented a tradition khukri as a memento to the British Army.
ii. The eight men of the 2nd Battalion of 8 Gorkha Rifles received the medal from British Prime Minister Theresa May.
iii. The exercise is so difficult that many teams are unable to finish. However, those who do 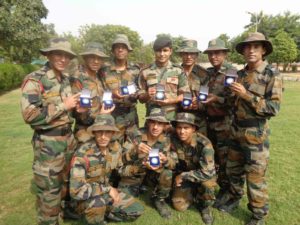 are honoured by gold, silver, bronze medals or an accreditation for passing the test.
iv. The Cambrian Patrol is an annual international military patrolling exercise in the rugged Cambrian Mountains of Wales.It is one of the most gruelling exercises in the world.
Wales :
♦ Capital: Cardiff
♦ Currency: Pound sterling

Iraq’s parliament passes law banning alcohol
i. Iraq’s Parliament passes law to ban the sale, import and production of alcohol in the country under Article 14. It was also passed by MPs in Baghdad. It was announced by a veteran Christian MP, Yonadam Kanna .
ii. The law is justified by the Constitution, which prohibits any law contradicting Islam.
iii. Every violation of this law incurs a fine of 10 million to 25 million dinars [roughly $8,000 to $20,000].
Iraq :
♦ Capital: Baghdad
♦ Currency: Iraqi dinar
♦ Prime minister: Haider al-Abadi
♦ Alcohol companies in Iraq – Farida beer or Asriya arak.

BSE launches ‘paperless SIP’ facility for mutual fund investors.
i. BSE has introduced a paperless SIP(Systematic Investment Plan) facility for mutual fund (MF) investors.
ii. It will extremely cut the registration time and also allow subscribers to transact through different payment modes including net banking.
iii. SIP is an investment vehicle that allows investors to invest in small amounts periodically instead of lump sums. The frequency of investment is usually weekly, monthly or quarterly 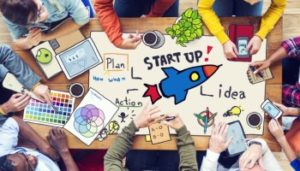 i. The Cofounder launches itself as India’s first startup magazine that will help boost the entrepreneurial ecosystem in the country through its stories.
ii. The Cofounder, founded by Adhish Verma and Arunraj Rajendran, is the first startup magazine that will talk about real stories behind the early stage startups and entrepreneurs.
iii. The company was incorporated in 2016 with its parent company being Hirestreet Media Pvt Ltd and is backed by UK-based Sharpedge.

Aditya Birla Group to invest Rs 20000 crore in MP.
i. Aditya Birla Group Chairman Kumar Mangalam Birla pledged an investment of Rs. 20,000 crore for the state of MP in sectors like retail, telecom and cement.
ii. According to Mr. Birla at Madhya Pradesh Global Investors Summit, MP is among the top markets for Idea Cellular, which has already invested nearly Rs. 7,000 crore over two decades.
iii. The group is exploring a greenfield cement plant, an investment of Rs. 3,000 crore in expansion of Hindalco’s smelter and opening of more retail stores for Pantaloons and Madura Garments.

AIIMS, Ganga Ram doctors chosen for Dr B C Roy award
i. Randeep Guleria, Head of Pulmonology, and CS Yadav of department of orthopaedics, from the All India Institute of Medical Sciences have been chosen for Dr Bidhan Chandra Roy Award Roy Award for excellence in the field of medicine.
ii. Chairman of Board of Management at SGRH DS Rana selected for in the category of recognising the best talents in encouraging the development of specialities in different branches in medicine
iii. Arvind Kumar also chosen for the ‘Eminent Medical Person’ category.
Dr. BC Roy Award : 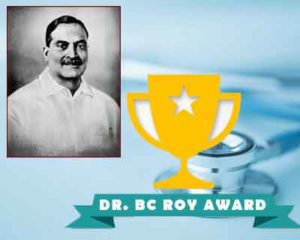 ♦ The Bidhan Chandra Roy Award was instituted in 1976 in the memory of renowned physician and freedom fighter BC Roy by Medical Council of India.
♦ The Award is given annually in each of the following categories: Statesmanship of the Highest Order in India, Medical man-cum-Statesman, Eminent Medical Person, Eminent person in Philosophy, Eminent person in Science and Eminent person in Arts.
♦ It is presented by President of India in New Delhi on July 1, National Doctors’ Day.

Pelé holds Guinness World Record for most career goals
i. Former Brazilian footballer Edson Arantes do Nascimento known as Pelé holds the Guinness World Record for the most number of goals scored by an individual in a specified period.
ii. The total goal scored by him was 1,279 goals from 7 September 1956 to 1 October 1977 in 1,363 games.
iii. Since his retirement in 1977, Pele has become an international ambassador for sport, working to promote peace.
iv. He has been actively involved in leprosy elimination campaigns in Brazil and has done extensive work for children’s causes through UNICEF.

China’s space lab Tiangong-2 successfully launches micro satellite
i. China’s space lab Tiangong-2 orbiting the Earth with two astronauts on board has successfully launched a micro-satellite which weighs 47 kilograms and is the size of a printer
ii. The micro satellite is able to conduct efficient orbit control, process tasks autonomously and transmit data at high speeds.
iii. The micro satellite has a series of visible light cameras, including a 25 megapixel camera and wide-angle imagers.

World Bank lenders must aid countries to manage shift away from coal
i. The World Bank and other global development lenders and other financial institutions must help countries such as India to finance the shift of their coal production to more efficient technologies so they can meet their COP21 commitments said by Benjamin Sporton, World Coal Association Chief Executive .
ii. The World Bank should not support coal based power plant. Instead of Coal Power Plant Super critical plants and ultra super critical plants (USC) substantially reduce carbon dioxide emissions and virtually eliminate particulate matter emissions.
iii. India now push towards renewable energy like wind energy, solar Energy to lowering the share of coal in the overall energy contribution.
INDC :
♦ The Intended Nationally Determined Contributions(INDC) submitted by 19 countries include India. India’s INDC is balanced and comprehensive.
♦ Switzerland became the first nation to submit its INDC to reduce greenhouse gas emissions in 2015. 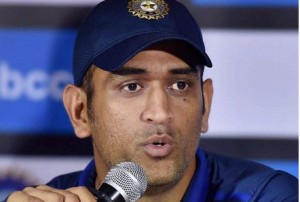 Lewis Hamilton wins 2016 United States Grand Prix
i. Lewis Hamilton from Britain won the US Grand Prix in Austin, Texas on October 23, 2016.It was Hamilton’s 50th career victory and seventh win of the current season and his third consecutive triumph on the Texas circuit.
ii. Moreover, it was his fourth Grand Prix victory in the past five years.
iii. Nico Rosberg and Daniel Ricciardo secured second and third place respectively.
iv. Hamilton win all the three and Rosberg only needs two seconds and a third place finish to win the race.

Poet And Novelist Lucia Perillo Dies At 58
i. The Pulitzer Prize winning Author Lucia Perillo has died in Olympia. He was 58.
ii. Perillo authored several collections of poetry including “Inseminating the Elephant” in 2009, which won the Pulitzer Prize and winner of the Rebekah Johnson Bobbitt National Prize for Poetry from the Library of Congress.
iii. The MacArthur Genius Fellow was diagnosed with multiple sclerosis in 1988 and his first book was “Dangerous Life.”
iv. He has been working as a professor at Syracuse University, Southern Illinois University, Saint Martin’s University, and in the Warren Wilson College master of fine arts program.

Qatar’s former ruler Sheikh Khalifa bin Hamad al-Thani passes away at 84
i. Qatar has announced three days of national mourning after the former Emir Khalifa bin Hamad Al-Thani, who was deposed in a palace coup, died aged 84.
ii. The former ruler, the grandfather of the current Emir Tamim bin Hamad Al-Thani
iii. During his time as leader from 1972 to 1995, he oversaw the transformation of modern-day Qatar into an energy-rich country. 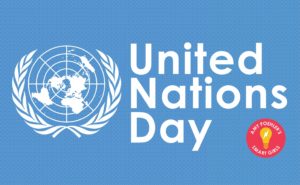 Indo Tibetan Border Police(ITBP) celebrated its 55th raising day
i. Indo Tibetan Border Police, ITBP celebrated its 55th raising day on October 24.
ii. The force was raised on 24th October in 1962.
iii. It is deployed on border guarding duties from Karakoram Pass in Ladakh to Jachep La in Arunachal Pradesh covering 3488 kilometer of India-China Border manning Border Outposts on altitudes raging from 9000 feet to 18700 feet in the Western, Middle and Eastern Sector of the Border.