The 7th Asia Pacific Conference on Exercise and Sports Sciences (APCESS) was held in India for the first time at Manav Rachna International University, Faridabad.

PARTICIPANTS – 900 delegates from 41 countries including China, Croatia, Germany, Malaysia, Serbia, Singapore, South Korea, Thailand and Turkey participated in the event to debate on a slew of issues including promotion of.

The conference goal was to promote research in the sphere of exercise and sports with sports practitioners and students and its association with other health disciplines.

The inauguration of the “Monumental National Flag” measuring 30×20 ft. at the rotary junction connecting Shantipath, Niti Marg and Nyaya Marg was done by Delhi Chief Minister Arvind Kejriwal. The 105-ft. high monumental flagpole bearing the tricolour was installed at the Chanakyapuri area.

Tripura Police to accept FIR through SMS or e-mail

After the launch of toll-free helpline number for women in distress now Tripura Police is back with a new initiative which enables general public to register FIR (First Information Report) through an SMS or through an e-mail.

After the Maharashtra’s declaration of drought condition in 14,708 villages of state, the Maharashtra Cricket Association will hand over Rs one crore to the state government to tackle the drought situation in the region.

Flight of Nirbhay Missile Aborted after 700 Seconds of Launch

Nirbhay, India’s sub-sonic cruise missile got failed in its flight test which was launched from Integrated Test Range (ITR) at Chandipur in Odisha. Mission was aborted after 700 seconds as flight crashed into the Bay of Bengal. It just covered 128 km of its 1000 km range

It is developed by Defence Research and Development Organisation (DRDO)

SP Jain School of Management is the only school Of Indian origin is ranked as 95th on the list by The Economist The Economist MBA rankings Financial Times and Forbes are the most important rankings in the world.

The 11-year old business school was ranked among ‘Top 10 1-year international MBA’ in Forbes’ biennial rankings of the world’s top MBA programs last month. This year both Forbes and The Economist have ranked the school among top institutions

5% quota for Gujjars, other SBCs in Rajasthan

As per notification Rajasthan Special Backward Classes (Reservation of Seats in Educational Institutions in the State and of Appointments and Posts in Services under the State) Act 2015 would provide 5% reservation in jobs and educational institutions to the Gujjar, Banjara, Rabari, and Gadia Lohar communities in Rajasthan.

Northern Philippines smashed by Typhoon Koppu which have affected the lives of more than 16,000 people. There were 167 participants who travelled 1,920 km over six days.

This short film is all about a portrait of Indian avant-garde painter Francis Newton Souza, revealing the cultural conditions for his work and its eventual institutionalisation

Bhaichung Bhutia to serve AIFF as its advisor 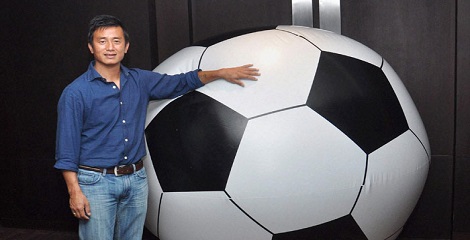 Hyderabad located Centre for DNA Fingerprinting and Diagnostics (CDFD) has been designated Dr Giriraj Ratan Chandak to the post of Director.

ABOUT HOUSING.COM
This Real estate portal is having its presence in 50 cities and employing about 2,500 people and 6000 brokers.

Association of Mutual Funds in India (AMFI) has been appointed Leo Puri of UTI AMC* as its new Chairman. He will succeed Sundeep Sikka.

A.Balasubramanian will continue on the position of Vice-Chairman as he did not met the expectations
(As per promotion hierarchy vice-chairman is promoted to chairman)

Chief Financial Officer of Porsche SE Hans Dieter Poetsch is designated as the chairman of the VW supervisory board. He will succeed Martin Winterkorn from November 1, 2015.

Maharashtra Govt designated Shreehari Aney as the Advocate General of the state. He will succeed Sunil Manohar who resigned his position due to personal issues.

After Sunil Manohar resigned Additional Solicitor General of India Anil Singh was then given the additional charge of AG.

As a part of e-commerce drive Aditya Birla Group has launched abof.com an online fashion portal for apparel, footwear and accessories for men and women from about 55 brands.
(President and CEO of abof – Prashant Gupta)

Novak Djokovic claimed his ninth title of the year with a 6-2 6-4 victory over Jo-Wilfried Tsonga in the Shanghai Masters final on October 18 2015.