Janani Suraksha Yojana paid dividends: Study
i. A new study brought in first conclusive evidence of the role played by Janani Suraksha Yojana (JSY) in reducing ‘socioeconomic disparities’ existing in maternal care.
ii. The JSY was launched in 2005 as part of the National Rural Health Mission (NRHM) to improve maternal and neonatal health by promotion of institutional deliveries (childbirth in hospitals).
iii. As per the latest Lancet report on maternal health, India accounted for 15 % of the total maternal deaths in the world in 2015 i.e.,45,000 women dying during pregnancy or childbirth. It is second only to Nigeria.
iv. This study was aimed to cover this subject. It was conducted using data from two rounds of the India Human Development Survey (IHDS) — conducted in 2004-05 (before the introduction of JSY) and 2011-12 (after JSY).

India’s youngest state Telangana gets 21 new districts
i. Telangana, carved out of Andhra Pradesh, came into existence on June 2, 2014 as the 29th state of India with 10 districts.The state government carried out the biggest administrative reform, creating 21 new districts. 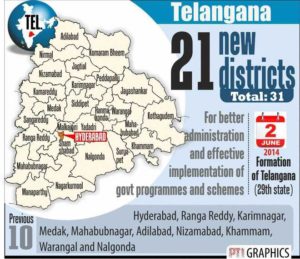 Samajwadi smartphone scheme launched by CM Akhilesh Yadav
UP Chief Minister Akhilesh Yadav launched the portal of Samajwadi Smartphone Scheme under which smartphones will be distributed to people in the state ahead of Assembly election.
Samajwadi Smartphone Scheme :
i. Uttar Pradesh resident who are all aged above 18, Class X passout, and earning less than Rs 6 lakh per year are eligible for this scheme.
ii. The applications for the Samajwadi Smartphone Yojana will be invited online from 10th October to 10th November 2016.
Schemes launched by Uttar Pradesh :
♦ Samajwadi Kisan Bima Yojana or Samajwadi Kisan & Sarvhit Bima Yojana is a new insurance scheme
♦ Pradhan Mantri Awas Yojana (PMAY) or Housing for all is an ambitious housing scheme of Narendra Modi Government aimed at providing housing for all by the year 2022.
♦ Samajwadi Yuva Swarozgar Yojana is a new self-employment scheme launched by the Uttar Pradesh Government in order to make the youth self-reliant.
♦ Kanya Vidya Dhan Yojana is a scholarship scheme launched by the Uttar Pradesh Government to provide scholarships to meritorious girl students in the state

FM Arun Jaitley embarks on 7-day official visit to Canada,US
i. Finance Minister Arun Jaitley embark a 7-day official(October 3 to October 10) visit to Canada and the US to attend the annual meetings of World Bank and IMF and hold talks with global investors.
ii. In Canada, he met top official and review progress made in the proposed Comprehensive Economic partnership agreement (CEPA) and Foreign Investment and Protection Agreement (FIPA).
iii. Arun Jaitley along with Shri Shaktikanta Das, Secretary (EA) participated in the 2016 IMF-World Bank Annual Meetings Plenary on October 7, 2016 at the historic DAR Constitution Hall, Washington DC.
iv. Jaitley, who is on an official visit to the US, chaired the Commonwealth Finance Minister’s meeting at the IMF headquarters.

Russia & Turkey agreed to intensify military, intelligence contacts
i. The Russian and Turkish leaders had agreed to intensify military and intelligence contacts after a meeting in Istanbul.Turkish President Recep Tayyip Erdogan, Russian President Vladimir Putin assented on the need for aid to get to the northern Syrian city of Aleppo.
ii. The two countries also had signed a deal to construct two Turk Stream gas pipelines to send Russian gas under the Black Sea to Turkey.This project was announced by Putin during a December 2014 visit to Turkey.
iii. Turkey would use one pipeline for its domestic consumption and the other would supply southeastern Europe, bypassing Ukraine.One pipeline, with 15.75 billion cubic meters of capacity, is expected to supply the Turkish market, while a second line would carry gas to Europe.
iv. Turkey, which is the second biggest consumer of Russian gas after Germany, 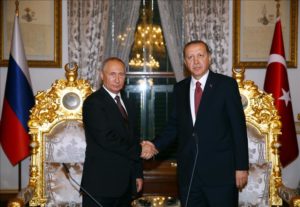 imports around 30 billion cubic meters of gas from Russia annually via two pipelines — the Blue Stream, which passes under the eastern Black Sea, and the Western Line through the Balkans.
Turkey:
Capital: Ankara.
Currency: Turkish lira.
President: Tayyip Erdogan.

The word Aiyoh is now in the Oxford English Dictionary
i. The Oxford English Dictionary (OED) has now included “Aiyoh” and “Aiyah” in its latest addition this September.
ii. The OED does four updates every year.
iii. Like many Indian words, this one is loaded and can mean many things depending on context and tone — irritation, disgust, surprise, dismay, pain, lament, disappointment, with “aiyah” and “aiyoh” being interchangeable.

Government issued more draft norms under bankruptcy code
i. The Government came out with another set of draft rules, including for liquidation of insolvent corporate persons, under the Insolvency and Bankruptcy Code.
ii. As part of implementing the Code, the government had already constituted the Insolvency and Bankruptcy Board of India (IBBI) while the draft norms would be finalised after taking into consideration views of the stakeholders.
iii. The centre had notified six draft regulations under the code prepared by a working group of experts. As part of the process for implementing the Insolvency and Bankruptcy Code, the ministry had set up a working group of practitioners and experts.
iv. The draft rules for insolvency process outline the duties of the resolution professional during the resolution process.The board would have 10 members. Apart from the chairman, currently there are four government-nominated members and the rest are expected to be appointed in coming months.

Enhanced Foreign Trade Data Dashboard launched by Nirmala Sitharaman
i. Ministry of Commerce & Industry to provide easy access to the public with regard to India’s export, import and balance of trade data in an analytical format, over time and space, Commerce & Industry Minister Smt. Nirmala Sitharaman  launched a new enhanced Dashboard on Foreign Trade Data. ii. Technology would be used for transparent decision making and reaching out to people using real time data. Dashboard is an improved version of the earlier EXIM Analytics Dashboard developed with many added features. It is more user-friendly and would facilitate the general public to have an accurate picture on dynamics of foreign trade performance of India.
iii. The new interface is broadly divided into Exports, Imports and Balance of Trade views. Each of these views provide the user with features to inspect the trade that happens between India and a particular country, zoom into the activities of a particular port and reflect trade pattern over any months of the user’s choice.
iv. Dashboard would provide an enabling environment to importers and exporters to identify and access global trade opportunities based on reliable and updated information, directly accessible to the public through Government sources.

Centre to invest 15 thousand crore to expand Panipat refinery
i. The Centre would invest Rs.15,000 crore to increase the capacity of Panipatrefinery from 15 million tonnes (MT) to 25 MT to create jobs was the announcement made by Dharmendra Pradhan, Union Minister of State for Petroleum and Natural Gas.
ii. Indian Oil Corporation would set up an ethanol plant in Panipat for Rs.500 crore to generate alternative fuel from agricultural residue.
iii. The announcement was made by Union minister of state for petroleum and natural gas Dharmendra Pradhan after distributing free LPG connections to women belonging to below poverty line families under the Pradhan Mantri UjjwalaYojana at Panipat.
iv. Pradhan announced downstream industrial units of a petrochemical hub for about Rs.5,000 crore.He appreciated Khattar for announcing to make Haryana kerosene-free by March 31.

Sir Ian McKellen honoured at UK Theatre Awards
i. Veteran actor Ian McKellen was honoured at the UK Theatre Awards that took place on October 9 in London for his individual contributions to British theatre.
ii. McKellen was honoured with the Outstanding Contribution to British Theatre prize.
iii. The 77-year-old actor, best known for his roles in the “X-Men” and “Lord Of The Rings” film franchises, was recognised for “championing diversity and contribution to the British theatre” at the ceremony held at London’s Guildhall.
iv. Actress Vanessa Redgrave was presented with The Gielgud Award For Excellence In The Dramatic Arts at the UK.

Moroccan king reappoints Abdelilah Benkirane as PM
i. Abdelilah Benkirane, leader of Morocco’s Islamic Justice and Development Party, has been appointed for another term as the country’s prime minister.
ii. Mohammed VI, the king of Morocco, made this announcement after Benkirane’s party, the PJD, emerged with the most number of seats in the 395-seat lower house of parliament.
iii. Benkirane, a politician from the capital Rabat, has been serving as prime minister since 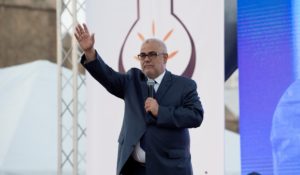 India showed 2nd highest growth in science research: Report
i. India is at the second position among countries with the highest increase in their contribution to high-quality scientific research, according to a new report which shows that the growth of research in the country is only behind China’s.
ii. The institutions from India among the top 100 highest performers across the globe include Council for Scientific and Industrial Research (CSIR), Indian Institute of Science Education and Research (IISER), Tata Institute of Fundamental Research (TIFR), Indian Institute of Science (IIS) and Indian Institutes of Technology (IITs).
iii. As many as 40 of the top 100 performers are from China, with 24 of those showing growth above 50 per cent since 2012.The US – which remained the largest contributor to high-quality scientific papers overall – has 11 entrants into the top 100, despite many starting from a high base.
iv. India’s emergence as one of the world’s largest economies is being reflected by its increasing contribution to the world’s high-quality research publications as the Nature Index Rising Stars had shown. i. Scientists had discovered a major group of organisms contributing to climate change, the second major breakthrough in 12 months towards mapping the tree of life.
ii. The previously unknown group of methane-metabolising micro-organisms appeared to be ancient and widespread in nature, researched by Gene Tyson from the University of Queensland in Australia.
iii. He added that the  methane-producing and consuming organisms played an important role in greenhouse gas emissions and consumption, contributing to climate change.
iv. This research expanded our knowledge of diversity of life on Earth and suggested we are missing other organisms involved in carbon cycling and methane production.
v. Traditionally, these type of methane-metabolising organisms occur within a single cluster of microorganisms called Euryarchaeota.

2016 China Open – Overview
♦ World number two Andy Murray from UK defeated Bulgaria’s Grigor Dimitrov defeated Dimitrov 6-4 7-6 (7-2) to clinch the men’s title of the China Open on September 10 2016  . This was Murray’s fifth title of his year and the 40th of his career.

Philanthropist, Businesswoman Parmeshwar Godrej Passes Away
i. Parmeshwar Godrej, philantropist and wife of Godrej group chairman Adi Godrej passed away in Mumbai on October 11 2016. She was 72 . 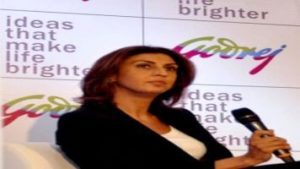 ii. She was Known as the dynamic face of the Godrej clan and had an impact on all fronts: family office and social.
iii. She has been best known huge contribution to create awareness about AIDS with Hollywood actor Richard Gere with whom she launched the Heroes project to fight HIV-AIDS in India.

Former boxing champion Aaron Pryor dies
i. Boxing Hall of Famer Aaron Pryor died in Los Angels. He was 60.
ii. Pryor was known as ‘The Hawk‘ .He built a 39-1 record with 35 knockouts during a career . His biggest moments in the ring were his two junior welterweight victories over Arguello.
iii. His first bout against Arguello is still considered one of the greatest fights in boxing history. He scored a 14th-round knockout to win the match at Miami’s Orange Bowl on November 12, 1982.
iv. The two fighters squared off in a rematch on September 9, 1983 in Las Vegas. Pryor knocked out Arguello in the 10th round and then announced his retirement. 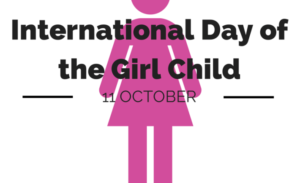