We are here for you to provide the important current affairs November 25 2017 which have unique updates of all daily events from all newspapers such as The Hindu, The Economic Times, PIB, Times of India, India Today, Indian Express, Business Standard, all Government official websites. Our complete current affairs helps you to get more marks in Banking, insurance, UPSC, SSC, CLAT, Railway and all other competitive Exams. 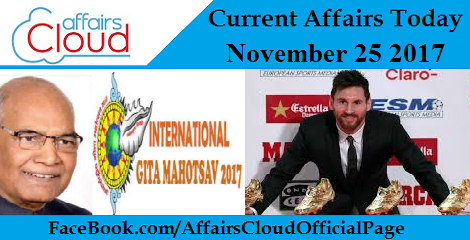 Punjab govt notifies ban on truckers’ cartelisation
On November 24, 2017, Punjab State Government notified the ‘Punjab Goods Carriages (Regulation and Prevention of Cartelization Rules), 2017’, banning goods carriage operators from forming cartels in the state.
i. This notification is aimed at creating a favourable environment for industries and business houses in the state which will encourage industrial and infrastructural investment.
ii. As per the notification, operators and permit holders of goods carriages have been barred from forming a cartels which deny freedom of choice to prospective consignors and consignees .
iii. Besides, operators should not compel or coerce any other operator to become a member or partner with him and should not stop him to pick up goods from any local areas, towns or cities within the State.
iv. In case of violation of these norms, police recourse and penalty in the form of suspension or cancellation of the permit has been prescribed.
Quick Facts about Punjab:
♦ Capital – Chandigarh
♦ Current Chief Minister – Amarinder Singh
♦ Current Governor – V P Singh Badnore
♦ Important River – Sutlej 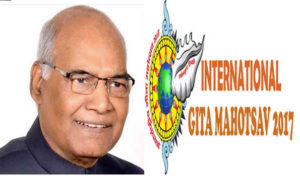 More Information about International Gita Mahotsava-2017:
i. Gita Mahotsava-2017 will conclude on December 3, 2017.
ii. Mauritius is the partner country and Uttar Pradesh is the partner state for this event.
iii. About 20 lakh people participated in Gita Mahotsav last year, which also included people from 35 countries.
iv. This year, about 25-30 lakh people are expected to participate in this event till December 3, 2017.
v. On November 25, 2017, President Ram Nath Kovind, also participated in Gita Yajna and Gita Poojan ceremonies at Brahma Sarovar and inaugurated an international seminar on Gita at the Kurukshetra University campus.

President Ram Nath Kovind inaugurates two-day conference on National Law Day in New Delhi
On 25th November 2017, President Ram Nath Kovind inaugurated the 2-day conference on National Law Day in New Delhi.
Two-day conference on National Law Day:
i. This conference is organised by the Law Commission and the Niti Aayog to mark the National Law Day. The National Law Day is celebrated on November 26, the day on which the Constitution of India was adopted by the Constituent Assembly in 1949.
ii. There will be four sessions on relevant issues concerning India’s judicial system. These include ‘judicial review and parliamentary democracy – balancing the separation of power’ and ‘appointments to higher judiciary – constraints of collegium system and reforms ahead’.
iii. There will also be sessions on themes like ‘structural reforms for overcoming delays in justice delivery’ and ‘scope of judicial powers, judicial activism’.
iv. Prime Minister Narendra Modi will deliver the valedictory address at the end of 2-day of the conference.
About Constitution of India:
♦ Ratified – 26 November 1949
♦ Author – B. R. Ambedkar and Drafting committee of the Constituent Assembly of India

Military exercise in Andaman & Nicobar Islands:
i. This is expected to help to counter China’s strategic moves in the Indian Ocean Region (IOR) and ensure security of sea lanes converging towards the Malacca Strait.
ii. The “Defence of A&N Islands Exercise” (DANX), with fighters, heavy-lift transport aircraft, warships, infantry combat vehicles, special forces and regular troops, was conducted from November 20 to 24, 2017 to fine-tune operational drills and synergy among the Army, Navy and Air Force in the region.
Some of the Indian military exercises:
♦ Exercise TROPEX – inter-service military exercise involving all of the services of the Indian Armed Forces
♦ INDRA – bi-annual military exercise conducted by India and Russia
♦ SIMBEX – annual bilateral naval exercise conducted by the Indian Navy and the Republic of Singapore Navy 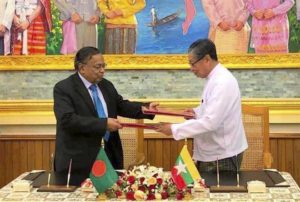 Information about Rohingya Crisis and Bangladesh-Mynamar Repatriation Deal:
i. Since August 2017, nearly 600000 Rohingya people fled Myanmar to the neighbouring Bangladesh after army started an operation in response to an attack by Rohingya militants.
ii. Myanmar has now accepted to repatriate these Rohingya refugees from Bangladesh and a deal in this regard has been signed by Bangladesh Foreign Minister A.H. Mahmud Ali and Myanmar State Counsellor Aung San Suu Kyi in Myanmar’s capital Naypyidaw.
iii. Myanmar will start the repatriation process in two months. A joint working group to oversee the process will be formed comprising of foreign secretaries of both the countries.
iv. While negotiating the deal, Bangladesh had sought the involvement of UN agencies to verify proper resettlement of repatriated refugees. However, this proposal was rejected by Myanmar in the final deal.

Ayodhya Mahotsav to be held in South Korea next year
‘Ayodhya Mahotsav’, depicting the cultural heritage of the temple town, would be held in Seoul and Gimhe cities of South Korea in 2018.
Ayodhya Mahotsav:
i. In return, a ‘Korea Festival’ will be held in Lucknow and Ayodhya. An in-principle decision in this regard was made during the meeting of the Uttar Pradesh government and a delegation from South Korea led by Mayor of Gimhe city, Kim Wonman.
ii. People in South Korea believe that 2,000 years ago, an Ayodhya princess had married a Korean king Kim Suro.  At present, their descendants are members of the “Crock Clan” and had built a memorial in Ayodhya.
iii. During the meeting, it was also decided that Agriculture department of UP government will receive technical support from South Korea for research in rice production.
Some of the festivals in Uttar Pradesh:
♦ Lath mar Holi – neighbouring towns of Barsana and Nandgaon near Mathura
♦ Lucknow Mahotsav – Lucknow
♦ Taj Mahotsav – Agra

JM Financial gets NHB nod for home finance arm
Financial services firm, JM Financial has received certificate of registration from the National Housing Bank (NHB) for carrying out housing finance activities through its subsidiary JM Financial Home Loans.
i. While announcing the results for fiscal 2016- 2017, management of JM Financial had said it would enter the affordable mortgage segment along with a property brokerage.
ii. Currently, services offered by JM Financial include investment banking, broking, institutional equity sales, wealth management and asset reconstruction among others.
iii. It already has two non-banking arms, one of which is focused on real estate lending and the other is into credit business. Both these arms have combined asset of around Rs 12000 crore. 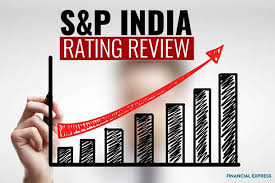 Observations on S&P’s latest ratings:
i. BBB- rating is the lowest investment grade and just one notch above junk status.
iiS&P stated that India’s sizable fiscal deficit, low per capita income and high government debt do not warrant a sovereign rating upgrade as of now.
ii. However, it praised the recent reforms undertaken by Indian Government and expects Indian economy to grow strongly during 2018-2020.
iv. S&P’s ’Stable’ outlook for India indicates sound external account position.
v. It is to be noted that, last week another rating agency, Moody’s had upgraded India’s sovereign ratings to Baa2 with outlook for the nation as ‘positive’. Moody’s cited recent economic and institutional reforms by Modi Government as the primary justification for this upgrade. 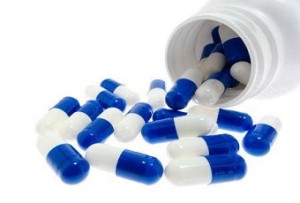 i. Reduction in prices for these essential formulations is in the range of 6-53%.
ii. Oxaliplatin (injection 100mg), used for colon or rectal cancer treatment, Japanese encephalitis vaccine and measles rubella vaccine are some of the drugs for which the ceiling prices have been capped.
iii. Besides, NPPA has notified ceiling prices of 13 formulations and has revised prices for 15 formulations.
iv. NPPA is authorised to fix ceiling price of essential medicines of Schedule I under the Drugs (Prices Control) Order (DPCO) 2013.
Quick Facts about National Pharmaceutical Pricing Authority (NPPA):
♦ Formed in – 1997
♦ Headquarters – New Delhi
♦ Responsible for – fixation/revision of prices of pharmaceutical products, enforcement of provisions of DPCO and tracking prices of controlled and decontrolled drugs.
♦ Current Chairman – Bhupendra Singh

Government doubles incentives rates for garments, made-ups to 4 percent
Under Merchandise Exports from India Scheme (MEIS), Central Government has doubled incentive rates for export of readymade garments and made-ups to 4 percent from 2 per cent earlier.
Revision of Incentives for Garments and Made-ups:
i. This decision has been taken to boost shipments of readymade garments and made-ups.
ii. Readymade garments and made-ups are labour intensive sub-sectors of textile sector. Thus encouraging its exports through incentives would lead to more production, which would eventually generate employment opportunities.
iii. Incentives to be paid under this initiative are estimated to be Rs 1143.15 crore for 2017-18 and Rs 685.89 crore for 2018-19.
iv. The new incentive rates will be applicable with effect from November 1, 2017 and will continue till June 30, 2018. 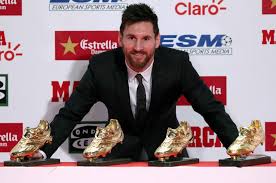 Lionel Messi – Golden Shoe Award:
i. It is the fourth time Lionel Messi has received the Golden Shoe Award, drawing him even with Cristiano Ronaldo as the award record-holders.
ii. Messi was presented with the trophy by teammate Luis Suarez, who won the award in 2015-16. Andres Iniesta and Sergio Busquets also attended the ceremony in Barcelona.
iii. Messi, Ronaldo, and Suarez have shared the prize for the past nine years. The Golden Shoe is awarded by European Sports Media, an association of European sports newspaper and magazines.
About Lionel Messi:
♦ Argentine professional footballer
♦ Current team – Barcelona
♦ Awards – FIFA World Player of the Year, FIFA World Cup Golden Ball, Copa America Best Young Player, Best International Athlete ESPY Award etc. 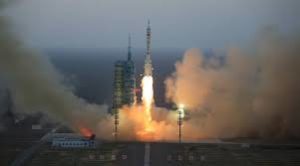 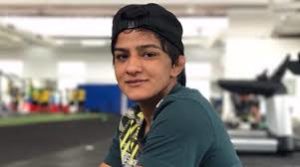 Ritu Phogat – Silver medal in Under-23 Senior World Wrestling Championship:
i. Ritu Phogat lost against Turkish Wrestler Demirhan in the gold medal clash and settled for a silver medal. She is 23 years old. She had won the gold medal at the Commonwealth Wrestling Championship in 2016.
ii. In quarterfinal, Ritu defeated Bulgarian Wrestler Selishka 4-2 points before defeating Chinese Wrestler Jiang Zhu 4-3 points in the semifinal.
iii. Ritu had won the National championship in Indore this month. She also won a bronze medal at the Asian Championships in May 2017.
About Senior U23 World Championships:
♦ Dates – November 21 – 26, 2017
♦ Location – Poland

Rajasthani folk singer Mangi Bai Arya passes away
On 24th November 2017, Rajasthani Maand folk singer Mangi Bai Arya passed away following a heart attack in Udaipur.
Death of Mangi Bai Arya:
i. Mangi Bai Arya was 88 years old. She had learnt singing from her father Kamlaram Arya, an eminent classical singer of his times.
ii. She died of heart attack. She had contributed significantly in taking Maand to the national and international levels.
iii. She has won several awards, including the Kendriya Sangeet Natak Akademy Award. The Directorate Akashvani had graded Mangi Bai Arya as an A grade artist.
About Sangeet Natak Akademi:
♦ National level academy for performing arts set up by the Government of India
♦ Formation – 1952
♦ Headquarters – New Delhi 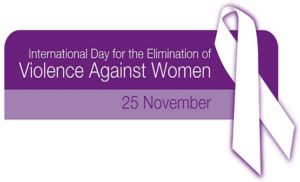