Welcome to Online Reasoning Section in AffairsCloud.com. Here we are creating question sample in Puzzles set, which is common for all the IBPS, SBI exam and other competitive exams. We have included Some questions that are repeatedly asked in bank exams !!! 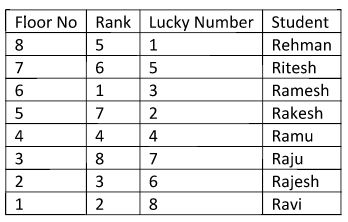 Eight boxes made of different materials- Aluminium, Iron, Gold, Plastic, Platinum, Silver, Steel, and Wood. They also weigh different weights – 50,100,150,200,250,300,350 and 400gm not necessarily in the same order.
Two boxes are placed between the boxes weighing 200gm and 400gm. The number of boxes below Steel box is more than the number of boxes above Steel box. There is only One box between Steel box and Gold box. There are three boxes between Iron Box and Aluminium box. The difference between weights of Plastic Box and the Platinum box is 350gm. There are two boxes between Aluminium box and box which weighs 150gm. The Platinum box is placed below Plastic box. There are three boxes between Wooden Box
and Box which weighs 300gm. The difference between weights of Silver and the Wooden box is 250gm. Box weighing 350gm is below Gold box. The 100gm box is placed above 50gms.The heaviest box is either at the top of all boxes or at the bottom of all boxes. The steel box is placed just above the box weighing 200gms. Iron box is just above the Gold box. No of boxes between Boxes weighing 350gm and 50gm is more than Two. 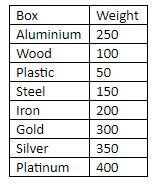