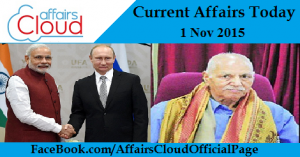 A  new scheme called ‘Vikalp’ has come into effect that promises a confirmed seat for the waitlisted passengers  in an alternate train if they opt for the option while booking their tickets online. The pilot project was started on November 1, for trains running on the Delhi-Lucknow and Delhi-Jammu routes.

Jammu and Kashmir CM Mufti Mohammad Sayeed ordered constitution of a committee at the 21st Board of Directors meeting of J-K Wakf Board.

To suggest a mechanism for streamlining the collection of endowments at shrines and rentals, of commercial assets owned by state Wakf Board, in a more transparent manner.

A Wakf is an unconditional and permanent dedication of property with implied detention in the ownership of God in such a manner, that the property of the owner may be extinguished and its profits may revert to or be applied for the benefit of mankind except for purposes prohibited by Islam.

Punjab government  signed a Memorandum of Understanding (MoU) with a consortium of Beta Renewables, Novozymes and CVC India Infrastructure Pvt. Ltd. for an estimated project worth Rs. 950 crore, during the Progressive Punjab Investor Summit, 2015 .

For setting up a bio-ethanol refinery  to tackling the menace of wheat and paddy straw burning in Punjab.

Kerala Cultural Affairs minister KC Joseph announced on the sidelines of the Kerala Formation Day celebrations that the federal government is dedicated to implement the Malayalam Language Act on the earliest.

IRS officer Bhushan Kumar Bansal has been appointed as the sixth member of the Central Board of Excise and Customs (CBEC),the apex body on indirect taxes filling up the last vacancy on the board.

Bansal was hitherto Director General of National Academy of Customs, Excise and  Narcotics (NACEN), Faridabad. Prior to that, he was Chief Commissioner of Delhi customs.

Central Board of Excise and Customs  (CBEC) :

Supersonic cruise missile BrahMos with a strike-range of over 290 kms was test-fired from the navy’s newest stealth destroyer INS Kochi successfully hitting a decommissioned target ship in the Arabian Sea.

New Zealand have won a record third Rugby World Cup and become the first team to successfully defend the title after beating Australia 34-17 in the final at Twickenham on Oct 31, 2015.

Professor and renowned archaeologist Virendra Nath Misra passed away at the age of 80 on 31st October 2015.