Sania Mirza and Martina Hingis sealed the Year-End WTA No. 1 doubles ranking on 31st  Oct 2015. This pair also received a trophy in acknowledgment of their feat presented by Dubai Duty Free.

The Indo-Swiss pair had as many as eight titles this year which speaks volumes of their success in 2015. 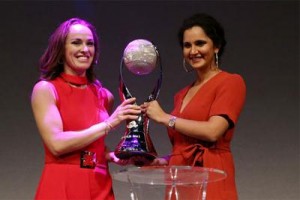