We are here for you to provide the important current affairs may 8 2017 which have unique updates of all daily events from all newspapers such as The Hindu, The Economic Times, PIB, Times of India, India Today, Indian Express, Business Standard, all Government official websites. Our complete current affairs helps you to get more marks in Banking, insurance, UPSC, SSC,CLAT , Railway and all other competitive Exams. 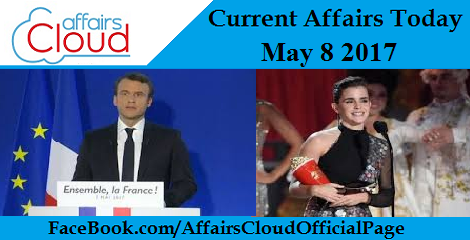 Country’s first bio refinery plant inaugurated in Pune
On May 7, 2017, Union Minister for Road Transport and Highway, Nitin Gadkari inaugurated India’s first bio refinery plant for renewable fuels and chemicals at Rahu in Pune district of Maharashtra.
i. This plant has been set up by Praj Industries. It can produce one million litre of ethanol per annum by processing a variety of agro-residue like rice and wheat straw, cotton stalk, cane trash and corn cobs. With further research and development, pipeline of other renewable fuels and chemicals will also be produced from this technology platform.
ii. India’s National Policy on Bio fuels has set indicative target of 20% blending of biofuels, both for bio-diesel and bio-ethanol.

CRPF Command Shifted from Kolkata to Chhattisgarh
Central Reserve Police Force (CRPF) has shifted its strategic anti-Maoist command headquarters from Kolkata to Chhattisgarh.
Key Points:
i. Its aim is to bring focus on combing operations in Chhattisgarh.
ii. This decision has been taken as surprise attack in Sukma district that killed 37 jawans of the paramilitary force.
iii. Seven years ago, the command headquarter was shifted to Kolkata due to logistical and connectivity issues 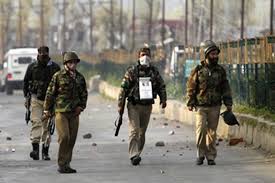 iv. The Centre has planned to enhance the surveillance of Maoist-hit areas by drones and more flying hours for Indian Air Force choppers, which are used by the forces for logistical support.
v. The move is in line with the Centre’s plan to redeploy its forces from peaceful West Bengal to Maoist of Abujmad in Chhattisgarh.
About CRPF
CRPF is the largest central armed police force or paramilitary force in India.
♦ Established in 1939.
♦ Its primary objective is to assist States and Union Territories in police operations to maintain law and order and control of the active revolt or uprising.
♦ CRPF personnel also carry out several operations in situations of crisis like terrorist attacks, counter-terrorism operations, and rescuing citizens during terrorist attacks among others.

Haryana to start door-to-door survey to collect data of every resident, issue smart IDs to every house
Haryana government has decided to gather a detailed data of every resident and issue a smart IDs for every house in Haryana.
Key Notes:
i. The aim of this survey is to get details of land holdings and the status of facilities such as social security pension, scholarship, MGNREGA, loans and LPG connection.
ii. The data will be used to make sure that benefits of 150 services of 87 departments are provided online.
iii. The unemployed youth will be provided employment through the survey and every hired youth (Saksham) will cover 150 to 200 houses.
iv. During the survey, address of each house, photo, location, details of owner of the house, electricity connection, water connection, details of electronic devices, bank account numbers, IFSC code and Aadhaar and personal details such as mobile number, e-mail ID, educational qualification, religion and other details will be gathered.

DIPP, WIPO to set up Technology and Innovation Support Centres for IP generation
Industrial promotion body DIPP and the World Intellectual Property Organisation (WIPO) have signed an agreement to establish Technology and Innovation Support Centres in the country.
Key Points:
i. It aims to boost generation and commercialization of intellectual properties.
ii. It will provide an impulsion to knowledge sharing, capacity building and sharing of best practices among the over 500 TISCs operating worldwide. 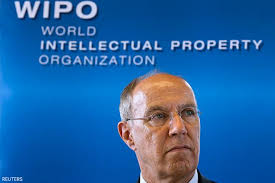 iii. WIPO’s TISC programme provides innovators in developing countries with access to locally based, high quality technology information and related services.
iv. It helps in creating protecting and managing their intellectual property (IP) rights.
v. The services offered by TISCs include access to online patent and non-patent resources and IP-related publications monitoring technology and competitors; and basic information on industrial property laws.
vi. The Cell for IPR Promotion and Management (CIPAM) act as the main intermediary between WIPO and TISC.
vii. It helps in host institutions and coordinates all the activities of the national TISC network.

Indians 6th biggest private spenders on health among low-middle income nations
According to an India Spend analysis of two recent studies by The Lancet, a British medical journal, Indians were the 6th biggest private spenders on health in the low-middle income group of 50 nations in year 2014.
i. In India spending on Public Health was 3% of total health spending in 2014. Indian Government ranked 147 among 184 countries on this parameter.
ii. The Global average for the same was 55% for 2014.Among the 50 lower-middle-income countries, India ranked 39th, as the average for these countries was 2%.

“Jordan, US launch major military exercises “ Eager Lion”
The 7,400 troops from 20 nations are taking part in Eager Lion military drills. It is the largest and most complex until now.
Key Notes:
i. Jordan and the United States will be going to start the Eager Lion, an annual military exercise. 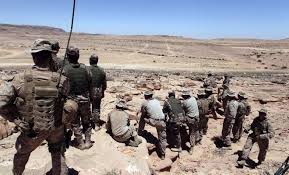 ii. Eager Lion exercise is the seventh exercise and the largest and most complex.
iii. The exercise would include border security, cyber-defence, and “command and control” exercises to strengthen coordination in response to threats including “terrorism”.
iv. A global strike mission will be conducted by two US Air Force B-1B bomber aircraft.
v. It is a long-range multi-mission bomber and it is the first time it has been conducted.

Edelweiss Tokio launches India’s first insurance that can be bought at PoS
Edelweiss Tokio Life Insurance has launched India’s first insurance product that can be bought at a point of sale (PoS). The product has been named ‘PoS Saral Nivesh’. It is the first product to be approved by the Insurance Regulatory and Development Authority of India’s guidelines on point of sale-life insurance products.
i. In November 2016, Insurance Regulatory and Development Authority of India had issued ‘Guidelines on Point of Sales – Life Insurance Products’ in order to facilitate access to insurance products for general public and increase the overall penetration of insurance.
ii. In the guidelines, it has been directed that for all PoS products, the benefits have to be predefined and disclosed upfront at the time of sale itself. Moreover it should be very simple to understand.

Emma Watson takes first major gender-neutral movie award
On May 7, 2017, actress, Emma Watson became the first person to win the MTV Movie and TV Awards’ new gender-neutral Best Actor in a Movie award for her performance as Belle in “Beauty and the Beast.”
i. This year, MTV Movie and TV Awards’ also added a gender-less best actor category award for television.
ii. In this context, ‘gender-neutral’ means, every award category had a single list of male as well as female nominees together, unlike Oscars or Golden Globe, which have separate categories for Male Actor and Female Actor.

ii. He is known for his best performance in the Oscar-nominated film “Lion”.
iii. Sunnys upcoming film “Love Sonia” is set to release in 2017 and features Demi Moore and Freida Pinto.
iv. Sunny grew up in the Mumbai slums, shot to global fame with his role in the Australian drama.
v. The Asian Awards was founded in 2010.It was given to those who have achieved the highest levels in their craft.

Key Notes:
i. Emmanuel promised to unite a divided and fractured France.
ii. Despite Le Pen’s loss, she marked a historical high point for the French righ.
iii. Macron now faces the challenge of trying to win a parliamentary majority.
iv. It is projected that Macron has received almost two thirds of the vote.
v. He also said in his speech that France was facing an “immense task” to rebuild European unity, fix the economy and ensure security against extremist threats.
About France:
♦ Capital : Paris
♦ Currency: Euro and CFP franc
♦ Official Language: French

1st large Chinese-made passenger jet C919 makes its maiden flight
The first Chinese-built passenger jet C919 has made it maiden flight. It would move the country into a new era of aviation.
Key Highlights:
i. The C919 is a twin-engine airliner designed to compete with the Airbus 320 and Boeing 737.
ii. It took off from Shanghai’s Pudong International airport and landed back there again 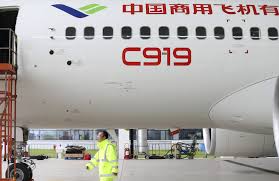 80 minutes later.
iii. The C919 is included in the world’s most advanced technology.
iv. The jet is the work of the Commercial Aircraft Corporation of China (Comac).
v. This is the specific mission of producing the country’s first commercially viable passenger jet.
vi. The C919 can be compared to mainstream large passenger jets such as the Boeing 737 and the Airbus 320 in terms of its capacity and its technology.
vii. By 2024 China is expected to overtake the US as the world’s largest aviation market.

New Butterfly Species found in Israel for 1st time in 109 Yrs
A new butterfly species found in Israel.It is the first such finding from the region in over a century according to the scientists.
Key Points:
i. This is the first new butterfly species discovered and described from the territory of Israel in 109 years.
ii. It is named Acentrias fritillary.
iii. It is found on the slopes of Mount Hermon in northern Israel. 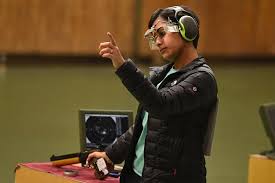 Hockey Him crowned champions of 7th Junior Women’s Hockey C’ship
Hockey Him (Himachal) defeated Hockey Mizoram in the 7th Junior National Hockey Championship 2017 (Women).
Key Notes:
i. The match was held at the Aisbagh Stadium Bhopal, Madhya Pradesh.
ii. The Hockey Him won by 5-0 to become champion.
iii. In a fast paced start, Hockey Him started scoring early with Ankita giving them the lead in the 14th minute.
iv. Hockey Him’s quality and acute game-play guaranteed them an outstanding victory.
v. Manju Chorasiya (39′) and Umra (66′) were also among the scorers for Hockey Him. 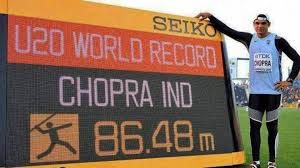 Key Notes:
i. Devender Singhwith a stunning throw of 84.57 m won the gold medal at the Indian Grand Prix Athletics meet in Patiala.
ii. He is the second javelin thrower from the country qualify of the London Championships.
iii. Neeraj Chopra, the World junior champion and record-holder. He was the first Indian javelin thrower to qualify for the London Worlds when he threw 83.32 m at the Asian Grand Prix in Jiaxing.