On May 7, 2017, actress, Emma Watson became the first person to win the MTV Movie and TV Awards’ new gender-neutral Best Actor in a Movie award for her performance as Belle in “Beauty and the Beast.” 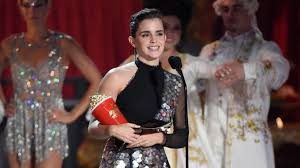 In this context, ‘gender-neutral’ means, every award category had a single list of male as well as female nominees together, unlike Oscars or Golden Globe, which have separate categories for Male Actor and Female Actor.

Emma Watson was born on April 15, 1990 in Paris, France.She became famous on account of her role as Hermione Granger in the Harry Potter film series.