We are here for you to provide the important current affairs may 23 2017 which have unique updates of all daily events from all newspapers such as The Hindu, The Economic Times, PIB, Times of India, India Today, Indian Express, Business Standard, all Government official websites. Our complete current affairs helps you to get more marks in Banking, insurance, UPSC, SSC,CLAT , Railway and all other competitive Exams. 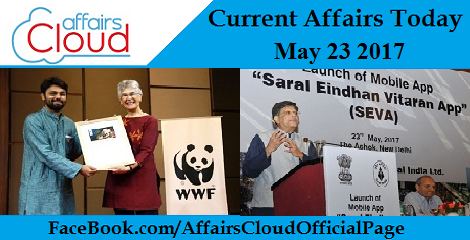 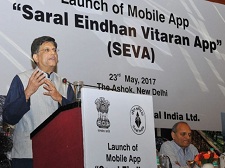 i. SEVA is aimed at increasing the Consumer Connect as well as the Transparency and Accountability in Coal dispatch.
ii. SEVA Dashboard provides summary of quantity of coal dispatched along with grades for the given day, month, and the latest yearly updates as well.
iii. By using this app the common man would be able to hold the Government accountable for the coal linkage allocations and would be able to check any pilferage or inefficiencies in coal consumption for power generation.
iv. SEVA has been developed by Coal India Limited (CIL).

Maharashtra Govt Forms ‘Good Morning Squad’ To Monitor Open Defecation
The Maharashtra government has decided to form ‘good morning’ squads to curb open defecation in all villages and districts across the State.
Key Notes:
i. The squads will comprise representatives of local bodies, self-help groups, NGOs, students and social workers working in the area of sanitation and cleanliness.
ii. The members of the squads have been asked to monitor areas where the practice is still prevalent.
iii. They have authorized to report to the civic bodies areas that have no access to toilets. 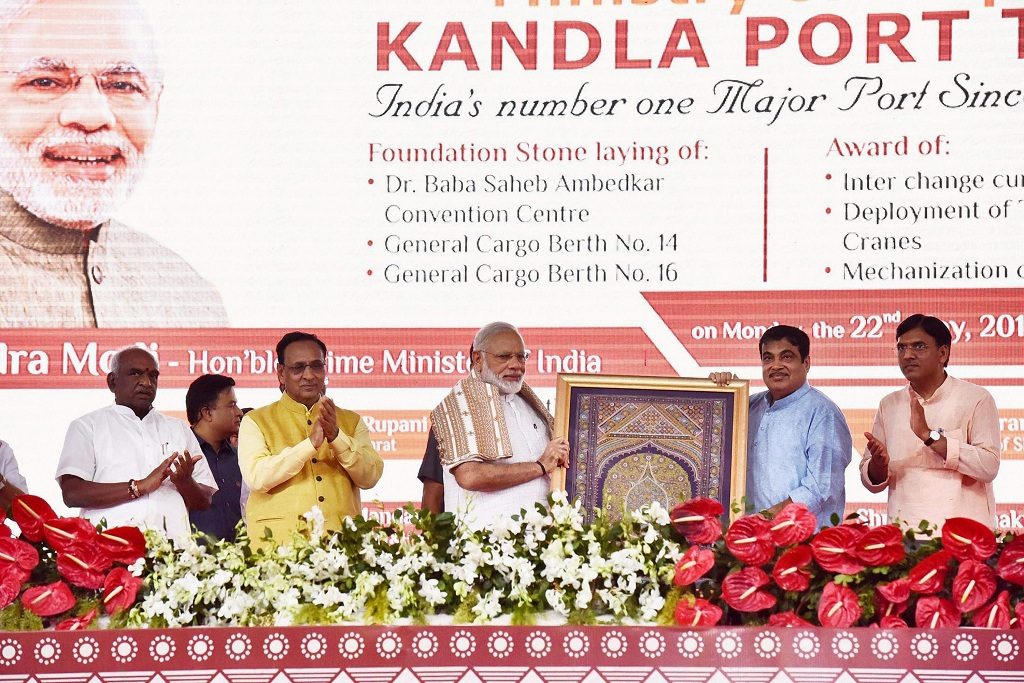 Key Notes:
i. It’s total cost worth Rs 993 crore.
ii. The projects include a convention centre named after Babasaheb Bhimrao Ambedkar.
iii. The Kandla Port Trust is named after Pandit Deendayal Upadhyay, who stood for the uplift of all sections of the society.
iv. Other projects include two cargo berths, a road over bridge, deployment of two mobile harbour cranes and mechanisation of fertiliser handling facility at the port

UN Publishes First Draft of Nuclear Ban Treaty
On May 22, 2017, a UN conference on eliminating nuclear weapons published its first draft text.
i. This draft was strongly opposed by nuclear armed states including US.
ii. The treaty would require ratification by 40 states to come into force.
iii. The treaty does not contain clauses to destroy the current stockpiles held by nuclear states.
iv. Rather it seeks to stigmatise nuclear arms, in a similar manner to cluster munitions and landmines.

Japan to build World War 2 museum in Manipur
Japan is going to build a war museum at MaibamLokpaChing in Manipur’s Bishenpur district.
Key Points:
i. MaibamLokpaChing is a historical place where the British and the Japanese fought during the Second World War.
ii. On special occasions, relatives of the Japanese soldiers who died during the war, come to Manipur in memory of their loved ones.
iii. About 70,000 Japanese has lost their lives in the Imphal and Kohima battles, which are regarded as the fiercest.
About Japan:
Capital: Tokyo
Currency: Japan Yen
PM: Shinzo Abe 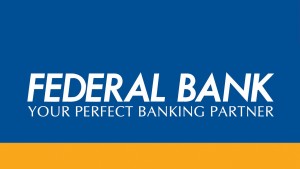 Key Notes:
i. Federal bank has launched in association with Geojit.
ii. The Selfie Trading Platform has a uniform feature across multiple platforms and devices and an advanced charting platform.
iii. It enables users to trade directly from charts, among others.
iv. It will give its users absolute control over their investments with timely research inputs to make sound investment decisions.
About Federal bank:
Federal Bank HQ: Kochi Kerala
MD&CEO: Mr. ShyamSrinivasan

Entertainment, Cable, DTH to attract lower taxes under GST.
Government has announced that ‘entertainment tax’ levied by states has been subsumed in the GST and thus, taxation on cable and DTH services shall come down post the roll-out of GST from July 1, 2017.
Taxation on Entertainment, Cable and DTH under GST regime:
i. Finance Ministry has stated that services by way of admission to entertainment events or cinematography films in cinema theatres will attract 28% GST.
ii. Currently, states impose entertainment tax of up to 100 per cent in respect of exhibition of cinematography films in theatres/cinema halls.
iii. Under GST, the entertainment tax has been subsumed, and hence only the taxes levied by a panchayat or municipality on entertainments and amusements will continue.
iv. In addition to the benefit of lower headline rates of GST, the entertainment service providers shall be eligible for full input tax credits (ITC) of GST paid in respect of inputs and input services.
v. GST Council has finalised 18% tax rate on cable TV and Direct-To- Home (DTH) services.

CBDT signs 2 more unilateral pacts with taxpayers
i. The Central Board of Direct Taxes (CBDT) has signed two unilateral advance pricing agreements (APAs) with Indian taxpayers in a bid to reduce litigation by providing certainty in transfer pricing.
ii. The two APAs signed pertain to sectors like chip design or development of embedded software and information technology (software development).
iii. Including these, total four APAs have been signed during this fiscal so far.
iv. The APA Scheme endeavours to provide certainty to taxpayers in the domain of transfer pricing by specifying the methods of pricing and determining the arm’s length price of international transactions in advance for the maximum of five future years.

Young Indian Cartoonist Rohan Chakravarty wins top conservation award for issues related to Wildlife, Environment
Rohan Chakravarty, a young Indian wildlife and environment cartoonist has won WWF International President’s Award.
Key Highlights:
♦ He won for his efforts to inspire change and attitudes towards nature.
♦ The award is given to recognize outstanding leadership in young conservationists from around the world.
♦ The 2017 WWF International President’s Award is presented in Manado, Indonesia.

Drake beats Adele’s Billboard Music Awards record with 13 wins
Drake has beaten the Adele‘s record and was the big winner at the 2017 Billboard Music Awards.
Key Points:
i. The rapper has bagged 13 awards.
ii. Hewon top artist, top male artist and top Billboard 200 album (Views) at the T-Mobile Arena in Las Vegas.
iii. Adele set a record at the show in 2012 with 12 wins.

ISRO and NASA collaborate to build Earth – imaging satellite NISAR
NASA and ISRO will collaborate to build Earth – imaging satellite NISAR.
Key Notes:
i. It has launched the world’s biggest and most expensive earth imaging satellite.
ii. It total cost $1.5 billion.
iii. The satellite has been named NASA-ISRO Synthetic Aperture Radar (NISAR).
iv. It will this is two frequency RADAR, it is an L-band 24 centimetre RADAR and S-band 13 centimetre.
v. The satellite will take weekly snapshots of earth, using the two radars.
vi. It will provide time lapse images of the motion of tectonic plates, ice sheets and changes in vegetation over land in agriculture and forests.

Israel Aerospace Industries has signed a $630 million deal with the India
Israel Aerospace Industries (IAI) has signed a $ 630 million deal with the Indian State-owned aerospace and defense company Bharat Electronics Limited (BEL).
Key Notes:
i. Israel’s Barak 8 long-range surface-to-air missile system was successfully tested aboard an Indian Navy ship
ii. This deal was a part of the Make in India initiative, BEL will be used as the main contractor for the project.
Some More Points:
Capital: Jerusalem
Official Language: Hebrew Arabic
President: ReuvenRivlin
PM: Benjamin Netanyahu 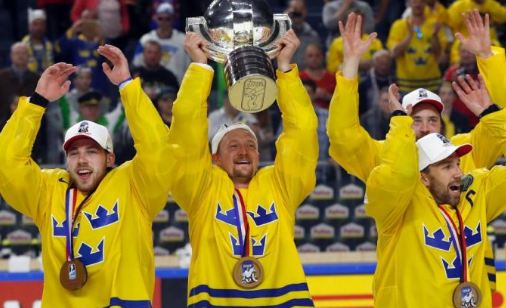 Key Notes:
i. It is authored by the Union Home Secretary Rajiv Mehrishi.
ii. The book was published by the McGraw Hill Education India.
iii. Every household should provide this book to children of 8th standard onwards.
iv. The book will help for gaining comprehensive knowledge of Indian history, economy, social fabric and current affairs.
v. The book would also be extremely useful for all competitive exams.

World Turtle Day – May 23 2017
Every year, World Turtle Day is celebrated across the world on May 23.
i. This day is sponsored since 2000 by American Tortoise Rescue.
ii. Objective behind celebrating this day is to bring attention to, and increase knowledge of and respect for, turtles and tortoises, and encourage human action to help them survive and thrive.
iii. According to American Tortoise Rescue, turtles and tortoises are threatened by the exotic food trade, habitat destruction, global warming and the pet trade.