We are here for you to provide the important current affairs may 30 2017 which have unique updates of all daily events from all newspapers such as The Hindu, The Economic Times, PIB, Times of India, India Today, Indian Express, Business Standard, all Government official websites. Our complete current affairs helps you to get more marks in Banking, insurance, UPSC, SSC, CLAT, Railway and all other competitive Exams. 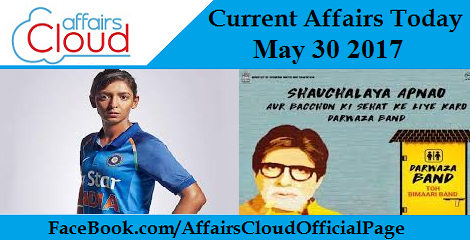 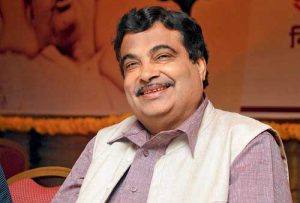 i.The main aim to lay the foundation is to boost port infrastructure.
ii. These projects will enhance connectivity of the hinterland to the port.
iii. The projects include integrated common rail yard facility at JNPT, construction of coastal berth, and restructuring of yard behind shallow water berth, the Ministry of Shipping said in a release.
iv. The Port Trust is focused on creating world-class infrastructure to enable hassle-free trade and contribute to the ease of doing business.
v. JNPT chairman Anil Diggikar

India-Australia Pact Transfer Of Prisoners Comes Into Effect
India-Australia pact for transfer of each other’s sentenced prisoners has come into effect with the ratification of the treaty by both the countries.
Key Notes:
i. The pact was signed by India and Australia on November 18, 2014.
ii. The agreement was ratified by India on December 16, 2015 and by Australia on November 21, 2016.
iii. Under the treaty, a prisoner who wants to be transferred should notify the Indian embassy or consulate of his or her desire.
iv. The application then must be approved by the foreign country and the government of India.
About Australia
♦ Capital: Canberra
♦ Currency : Australian Dollar
♦ PM: Malcolm Turnbull

India and FIJI sign MoU on Defence Cooperation
India has signed an MoU with FIJI on Defence Cooperation on May 29, 2017
Key Points:
i. The MoU will include in defence industry, military training, humanitarian assistance and disaster management.
ii. The Meeting was held between our defence minister and his counterpart. 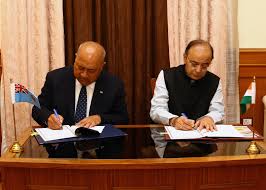 iii.The MoU has been signed in New Delhi the capital of India.
About FIJI
♦ Capital-Suva
♦ Currency-Fijian Dollar
♦ Defence minister of Fiji-Mr.R.IKubuabola.
♦ Defence  minister of India-Mr.Arun Jaitley.

Goa bans thin plastic bags to tackle garbage
The Goa State government has decided to ban buying and selling of plastic bags below 50 microns.
Key Notes:
i. The ban will come to effect from July 2017
ii. Goa Chief Minister Manohar Parrikar implemented the law with the fine of Rs 500 and then the fine will be subsequently raised to Rs 5,000.
About Goa
♦ Governor Of Goa: Mridula Sinha
♦ Capital: Panji
♦ Mollem National Park, Bhagwan Mahaveer Sanctuary

India ranks 120th among 131 nations in women workforce, says World Bank report
As per ‘India Development Report’ released by World Bank on May 29, 2017, India ranks 120th among 131 countries in terms of women participation in the workforce.
i. As per the report, participation level of women in Indian workforce has been dropping since year 2005, despite having 42% women who are graduates.
ii. In India, the women participation in workforce is only 27%, which is much lower as compared to China and Brazil where it is in the range of 65-70%. In this context, neighbouring countries, Sri Lanka and Bangladesh are having better numbers than India.

First women’s TV channel launched in Afghanistan
The first-ever women television channel “Zan TV (or Women’s TV)” has started in Kabul, Afghanistan.
Key Points:
i. It has been started on May 30, 2017 with a staff of all female presenters and producers.
ii. The main purpose to launch the women TV channel is to highlight the rights of Afghan women and to improve their status and ensure their equality with men in the conservative

society.
iii. It has been taken a crucial step for women’s rights, in a male dominated country which is struggling for peace.
iv .Founder of Zan TV is Hamid Samar
Afghanistan :
♦ Capital: Kabul
♦ Currency: Afghan afghani i .Priyanka has received the award for being an international icon.
ii. The event will be held at Bhaidas Hall, Vile Parle West in Mumbai.
iii. She will be given the award for newly introduced ‘Internationally Acclaimed Actress’ category at a ceremony.
iv. The board of trustees for Dadasaheb Phalke Academy Awards includes Johny Lever, Pahlaj Nihalani, Mithun Chakraborty and TP Agrawal.

Manipur Governor, Najma Heptulla appointed as Jamia Chancellor
Manipur Governor Najma Heptulla has been unanimously appointed as the Chancellor (Amir-e-Jamia) of Jamia Millia Islamia for a five year term by the University’s Court (Anjuman).
i. She succeeds Lt. Gen. (Retd.) M.A. Zaki, who will complete his five-year term this month. Appointment of Najma Heptulla was confirmed by Tala Ahmad, the Vice-Chancellor of Jamia Millia Islamia.
ii. She has been a five-time member of the Rajya Sabha, and it’s Deputy Chairman for 16 years. 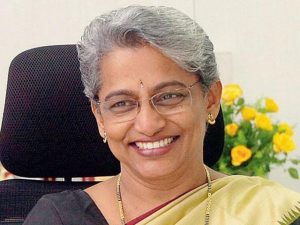 ii.The members are as follows:
1.Former Allahabad Bank chairperson and managing director Shubhalaxmi Panse
2.Private equity player Pradip Shah has been chosen into the board as independent members.
iii. The BBB work is to do a selection of MDs and directors of public sector banks and financial institutions.
About BBB:
♦ Banks Board Bureau (BBB) head: Vinod Rai
♦ BBB is an autonomous body of Union Government of India.
♦ BBB main aim is to improve the governance of Public Sector Banks.
♦ The Bureau started formed on April 01, 2016.

India’s own global positioning system NavIC to be operational from 2018
India’s Global Positioning System (GPS), the Indian Regional Navigation Satellite System (IRNSS), alternatively named NavICis going to be operated from 2018.
Key Points:
i. The testing of the system includes ground verification and calibration of NavIC data to calculate its accuracy.
ii. With the NavIC system India has joined the likes of the United States of America, Russia, and the European Union.
iii. NavIC is being tested for its accuracy and it will be available in the market for public use early next year.
iv. The Indian system is expected to be significantly more accurate than the GPS powered by American satellites.
v. NavIC with seven satellites covers India and its surroundings.
vi. The American GPS with 24 satellites in a constellation has wider reach and covers the entire world.
About Indian Regional Navigation Satellite System
NavIC stands for NAVigation with Indian Constellation.It has an altitude of 36000 kilometres above earth surface and two satellites on the ground as stand-by.
♦ It is capable of providing terrestrial, aerial and marine navigation, including vehicle tracking and fleet management, disaster management, visual and voice navigation.
♦ The system will cover the entire country, Indian Ocean and its surroundings.
♦ The system consists of a constellation of 3 satellites in Geostationary orbit (GEO), 4 satellites in Geosynchronous orbit (GSO).
♦ It will provide standard positioning service to all users with a position accuracy of 5 metre.

iii. It is the domestic T20 tournament held in England and Wales that features women cricketers.
iv. The inaugural season was held last year with six teams, viz. Lancashire Thunder, Loughborough Lightning, Southern Vipers, Surrey Stars, Western Storm and Yorkshire Diamonds.
v. In the final, the Southern Vipers defeated Western Storm to win the trophy.
About Harmanpreet Kaur:
Harmanpreet has played 139 international matches for India.She was named the captain of the T20 national side in November last year.
♦ She has been a vital player for India and the 28-year-old has the experience of playing franchise T20 cricket.

Kohli only Indian in top 10 ICC rankings
India captain Virat Kohli is the only cricketer from the country to feature in the top 10 of the ICC Players Rankings for ODIs.
Key Points:
i. He holds on third spot in the batsman’s chart.
ii. The top three batsmen -De Villiers (874), Warner (871) and Kohli (852) are separated by just 22 points.
iii. Among other Indians to feature in the top 20 of ICC Players Ranking for ODIs are Rohit (12th), Dhoni (13th) and Dhawan (15th).
About ICC
♦ Formed on: 15 June 1909
♦ Headquarter: Dubai,United Arab Emirates
♦ Chairman: Shashank Manohar
♦ President: Zaheer Abbas

Manuel Noriega, former Panama dictator, dies at 83
The Former Panamanian dictator Manuel Noriega died on May 29, 2017 at the age of 83.
Key Points:
i. He was ousted as Panama’s dictator by an American invasion in 1989.
ii. He also helped the U.S. seize drugs at sea and track money laundering in Panama’s banks, and reported on guerrilla and terrorist activities. 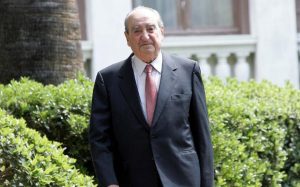