We are here for you to provide the important current affairs may 2 2017 which have unique updates of all daily events from all newspapers such as The Hindu, The Economic Times, PIB, Times of India, India Today, Indian Express, Business Standard, all Government official websites. Our complete current affairs helps you to get more marks in Banking, insurance, UPSC, SSC,CLAT , Railway and all other competitive Exams. 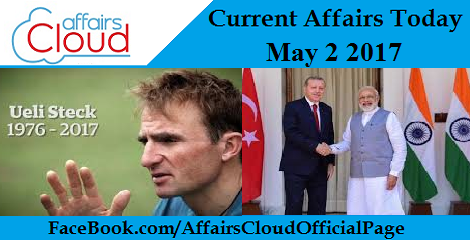 HRD Minister Prakash Javedekar launches Vidhya –Veerta Abhiyan
The Minister for Human Resource and Development, Prakash Javadekar has launched Students for soldiers- a nationwide Vidya – Veerta Abhiyan.
i. The portraits of Param Veer Chakra decorated soldiers were handed over to the Vice Chancellors of Jawaharlal Nehru University, Delhi University, Jamia Milia Islamia, Jammu and IIT Delhi.
ii. The “wall of heroes” depicting portraits of brave soldiers who showed exemplary bravery in defending the nation is expected to instil a sense of patriotism and nationalism among students. 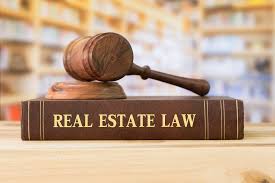 in overall transparency in the real estate sector which will encourage genuine private developers.
i. It is to be noted that Real Estate (Regulation and Development) Bill, 2016 was passed by Parliament in March 2016. So far only 13 States and Union Territories have notified the rules under this act.
ii. All State/UT governments have to appoint regulatory authorities for implementing the rules framed under RERA.

4th National Standards Conclave held in New Delhi
4th National Standards Conclave was held in New Delhi on 1st & 2nd May 2017.
i. Organised by: Department of Commerce, Government of India in collaboration with Confederation of Indian Industry (CII), Bureau of Indian Standards (BIS) and the National Accreditation Board for Certification Bodies (NABCB) and other knowledge partners
ii. Objective of 4th National Standards Conclave: To bring awareness and prepare Industries, Central Government Ministries, State Governments, regulatory/standards setting and conformity assessment bodies on the growing importance of “Standards” in the changing scenario of global trade.
iii. 9 sessions were held during this conclave, wherein several issues pertaining to standards in various sectors were discussed.

‘Second-tallest’ flag post comes up in Kolhapur, Maharashtra
On May 1st 2017 ,India’s second tallest flag pole has been inaugurated in Kolhapur at Western Maharashtra.
Key Points:
i. The pole is 90 feet long and 60 feet wide, weighs 24 tone ,and it cost around 1.1 crore for the installation.
ii. The pole which is 303 feet high has been constructed at the Police Garden located 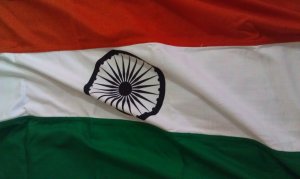 opposite of Superintendent of Police headquarters in the Kasaba Bawada area.
iii. Kolhapur Street Beautification Project (KSBP), a registered trust, has installed the flag post.
iv. Chief Minister Devendra Fadnavis inaugurated the pole by unfurl a national flag of 5400sq ft as a part of the ‘Maharashtra Din’ celebrations in the state.
v. State revenue minister and district guardian minister Chandrakant Patil inaugurated the flag post installed in Police Garden, located opposite the office of Kolhapur Superintendent of Police, by hoisting the tricolour on the occasion of Maharashtra Day
vi. On March 6th 2017, the flag pole with 360 foot long is located at the Indo-Pak Attari Border inaugurated the First tallest Flag pole.

Indian Railways to introduce premier Tejas Express between Mumbai and Goa in June
Indian Railways will launch the hi-tech Tejas Express on Mumbai-Goa route. It will be going to launch in June.
Key Points:
i. Railway will announce a new premier train service between Mumbai and Goa in June with state-of-the-art facilities.
ii. There will be 20 coaches in Tejas Express and have automatic doors and secured gangways for all coaches.
iii. There will be wi-fi facilities and toilet engagement boards.
iv. Tejas coaches will have 22 new features including fire and smoke detection and suppression systems and the improved aesthetics.
v. There will be more facilities like tea and coffee vending machines, magazines and snack tables individual LCD screens.Tejas Express will comprise executive class and chair cars.
vi. Tejas coaches will also have braille displays, digital destination boards, and electronic passenger reservation charts.
♦ Railway Misiter- Suresh Prabhu
♦ Constituency –Maharashtra 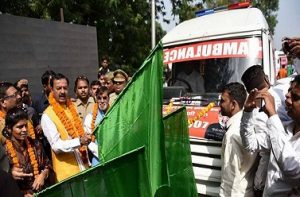 ii. The service will initially be available in Allahabad, Gorakhpur, Lucknow, Mathura and Varanasi.
iii. Uttar Pradesh is the second state after Madhya Pradesh to have an ambulance service for cows.
iv. A similar project was also launched in Madhya Pradesh.
v. An organisation plans to take action against those people who abandon their cows once they stop giving milk, and also against municipality officials.
vi. In 2015, 10 such cow ambulances were also deployed for service by an industrialist-cum-social worker.

Centre plans aerotropolis in Assam, seeks 2,000 acres
Union Minister of State for Civil Aviation Jayant Sinha has mentioned that Central Government is planning to build an aerotropolis in Assam and has sought 2,000 acres from the state government for the purpose.
i. The proposed aerotropolis would bring huge benefits to the region in terms of civil aviation and air connectivity.
ii. Mr. Sinha has requested the Assam Chief Minister Sarbananda Sonowal to allot 2,000 acres land at an hour’s journey away from Guwahati city near Brahmaputra River.
What is Aerotropolis?
It is an airport centric metropolitan hub, where infrastructure and economy are all based on the access to the airport serving as a commercial point like any traditional metropolis that contains a central city commercial core area and commuter-linked suburbs.

Dubai becomes first city to get its own Microsoft font
Dubai has become the first city in the world to get its own Microsoft-designed font. It was created in partnership with Microsoft. It was launched on May 1st 2017.
Key Highlights:
i. The font was developed in Latin and Arabic script and is available in 23 languages in versions of Microsoft Office to 100 million Office 365 users around the world.
ii. The font, available in three styles as ‘Dubai’, ‘Dubai Medium’ and ‘Dubai Light’, can be in italics, underlined and bold.
iii. UAE has launched the ‘Dubai Font’ in line with its vision of becoming a regional and global leader in innovation.
iv. Dubai Crown Prince Hamdan bin Mohammed al-Maktoum has insisted on all government institutions to adopt the font in official correspondence.
v. Dubai is the largest city in UAE.It has the world’s tallest tower, BurjKhalifa.
vi. Designed for more than 180 countries and is aimed to reflect the city’s symbols of tolerance, happiness and respect, enabling people to express, communicate and connect, reports the Khaleej Times. 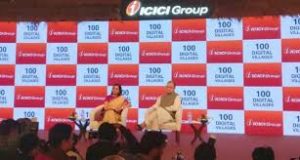 across 17 states in India.
ii. These include 16 in Gujarat, 14 each in Maharashtra and Madhya Pradesh, 12 each in Tamil Nadu and Karnataka and 11 in Rajasthan among others.
iii. Finance Minister Arun Jaitley inaugurated the 100 ICICI digital villages and said “The ICICI initiative should be followed by other banks in rural areas.”
ICICI Bank’s 100 Village Project:
i. The 100-village project, was taken up by the bank after noticing that minimum inconvenience was caused to people living in a model ‘digital village’ in Gujarat during the demonetisation period.
ii. ICICI Bank also imparted skill training and provided credit linkages to people living in these villages.Vocational training was provided to 11,300 villagers, including 70 per cent women and more than 2 lakh bank accounts were opened in these 100 Digital Villages. 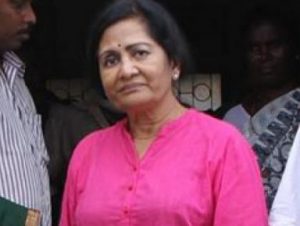 nkataraman is the daughter of former President of India, the late R Venkataraman.
i. This award has been given to her for her efforts in the areas of women’s welfare and rehabilitation of leprosy-affected persons for the past 30 years.
ii. The award was given to her by Tamil Nadu Chief Minister K Palaniswami.
About “Avvaiyar Award”:
♦ It was instituted by late Chief Minister J Jayalalithaa in 2012 to honour women actively working in the areas of social reform, women’s development, culture, media, inter-faith harmony, and administration, among others.
♦ The award carries a cheque for Rs one lakh, a gold medal weighing 8 gm, and a certificate. 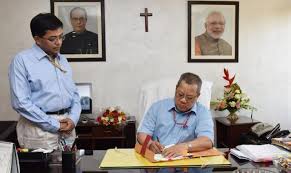 Management and Accounting in the North-East named INGAF-NER, based in Aizawl, Mizoram.
iii. He will be the First person from the North-Eastern Region to hold this position.
iv. He is graduated from the Hindu College of Delhi University.
v. He worked at higher positions in the Central Board of Direct Taxes(CBDT), Ministry of Information & Broadcasting, Ministry of Consumer Affairs, Food & Public Distribution, Ministry of Commerce and Ministry of Rural Development.
vi. He was also selected as Managing Director of North-Eastern Agricultural Marketing Corporation (NERAMAC), a Public-Sector Undertaking, based in Guwahati.

Department of telecom launches ‘Tarang Sanchar’ portal for information on mobile tower radiation
Department of Telecom (DoT), Ministry of Communications has launched Tarang Sanchar.It is a web portal for Information sharing on Mobile Towers and EMF Emission Compliances.
Key Facts:
i. It will allow tracking of radiation emitted from mobile towers within their locality.
ii. It checks their compliance with the Electromagnetic field (EMF) emission norms defined by the government.

iii. DoT ha prescribed standards electromagnetic emissions from mobile towers that are ten times stricter than the international standards prescribed by International Commission on Non-Ionizing Radiation Protection (ICNIRP).
iv. It is recommended by World Health Organization (WHO).
v. There is no scientific evidence of any health concerns from low power mobile BTSs.
vi. Manoj Sinha, Minister of State (Independent Charge) for Communications and Minister of State for Railways, formally launched the Tarang Sanchar portal 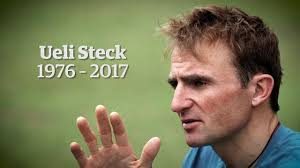 ii. He died while climbing Mount Nuptse. His body has been retrieved and is being brought to Kathmandu.
iii. He described the ambitious goal of climbing Everest as “primarily a physical project”.
iv. He was best known for his speed-climbing, and marks several records.
v. Steck, who was known as the “Swiss Machine” for his speed and was planning to climb 8,850-metre Mount Everest and nearby Mount Lhotse next month.
vi. He was one of the most-renowned mountaineers of his generation, and had won several awards for his mountaineering feats.
vii. In 2015, Steck decided to climb all 82 peaks in the Alps higher than 4,000 metres, travelling between mountains by foot, bike and paraglider only.