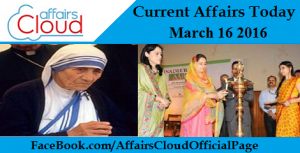 RUSA Scheme to be implemented to improve Equity, Quality of Higher Education

An initiative to improve the Quality of Higher education in India by implementing RUSA scheme which was started in 2013 was in news again with the Minister of HRD providing information about the scheme in the Lower house. 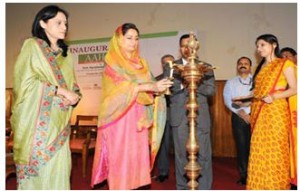 The largest fair on Food & Hospitality Sector in India, AAHAR 2016 was inaugurated by Hon. Union Minister for Food Processing Industries Ms. Harsimrat Kaur Badal on March 15, 2016. It is the 31st edition in this series.

Under Pradhan Mantri Mudra Yojana Loans worth Rs1.09 lakh crore have been sanctioned  to small entrepreneurs, loans worth over Rs.1.09 lakh crore were given to over 2.96 crore beneficiaries.

The Centre has released 609 crore rupees for upgrading prisons in eight States as recommended by the Thirteenth Finance Commission.

Union Government has given final approval for setting up a Mega Food Park in Khammam District of Telanganato facilitate creation of modern infrastructure for food processing along the value chain from the farm to the market.

Jammu and Kashmir Government has signed Memorandum of Understanding (MoU) with Union Ministry of Power, An overall net benefit of approximately Rs.9800 crore would accrue to the State by opting to participate in UDAY.

Mauritania has ratified the 2014 Protocol to the Forced Labour Convention, 1930, emphasising thereby the global movement against forced labour in all its forms, including human trafficking.

The Reserve Bank of India is likely to pay the government Rs 57,000 crore in dividends in the fiscal year 2016-17.

India’s largest lender State Bank of India has released arrears worth Rs.1, 465 crore to about 7.75 lakh defence beneficiaries under OROP scheme ,the scheme is expected to cost the government Rs 7,500 crore per

Pay interest on savings accounts every quarter: RBI to banks

Reserve bank of India asked banks to credit interest on savings accounts every quarter or shorter than that of the fiscal.

A survey of corporate India by the Confederation of Indian Industry (CII) says the metals and mining, automobile and construction materials sectors lead in sustainable business practices. This survey lists leading Industries like Tata, Reliance, Mahindra and few others as Sustainable Business Practices.

Union government had imposed anti-dumping duty of up to 44.7 percent on import of plastic-processing machines from Chinese Taipei, Malaysia, the Philippines and Vietnam for five years.

Mother Teresa To Be Canonised On September 4 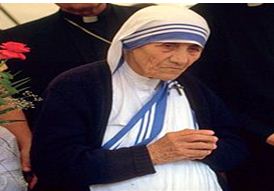 The “Blessed Teresa of Calcutta”, the founder of the Missionaries of Charity and a wonderful human being as known to the world, Mother Teresa is set to attain sainthood on September 4, as confirmed by Pope Francis.

Nepal To Have Its First Woman Chief Justice

Nepal is on a gender equality drive as it chooses its first woman Chief Justice, in a row of selecting women to top posts. Recently, the country got its first woman President and Speaker.

Atiur Rahman, the governor of Bangladesh’s central bank, resigned after $81 million cyber theft from the country’s official account at the Federal Reserve Bank of New York.

The United Nations formally suspended relationship with Russian Tennis great Maria Sharapova as a goodwill ambassador after she failed a drug test at the Australian Open.

UNICEF launched the first test for the use of Unmanned Aerial Vehicles-drones with Malawi government to search the cost effective ways of decreasing waiting period for HIV testing of infants.

An Illustrated Biography: Gandhi was authored by Pramod Kapooris a one platform for all those who want to know about the life of the Father of the Nation.