Gangetic River Dolphin to be City Animal of Guwahati
i. In a rare move Assam’s Guwahati became the first city in the India to have its own city 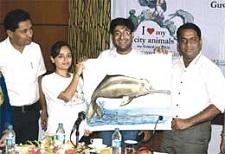 GOI and ADB sign $120 Million Loan Agreement to Modernize Irrigation and Improve Water Management in Odisha
i. Union Government and the Manila based Asian Development Bank (ADB) signed a $120 million loan agreement to improve irrigation and water management infrastructure in Odisha.
ii. The loan comes under the Orissa Integrated Irrigated Agriculture and Water Management Investment Program, which is the second tranche of a $157.5 million financing facility.
iii. The funding will be used for modernizing seven irrigation sub projects resulting for the improved irrigation in over 100,000 hectares, and strengthening of Water User Associations.
Odisha
♦ Capital: Bhubaneswar
♦ Chief Minister: Navin Patnaik
♦ Governor: C.Jamir

Prime Minister Visited Switzerland
After successful visit to Qatar, Prime Minister Narendra modi made a visit to Switzerland to ask support for India’s Membership in Nuclear suppliers Groups and to raise the issues related to black money invested by Indians in Swiss Banks.
♦ Switzerland is placed on the list of Prime Minister Five nation tour after Afghanistan and Qatar.
♦ Agenda: To expand Economic and investment ties and to have discussion with Indian Scientists working at CERN.

Arundhati Bhattacharya 5th most powerful woman in finance: Forbes
i. India’s largest lender’s Chairperson Arundhati Bhattacharya, have been ranked as the fifth powerful women in finance in the latest Forbes list of 100 most powerful people in the world.
ii. Bhattacharya has moved up five spots from the previous year rankings to 5th this year. The Finanace list topped by IMF chief Chirstine Lagarde
iii. In the Forbes 100 Ranking list four Indian women have been listed, Such as Bhattacharya has been ranked 25th, Chanda Kochhar of ICICI Bank ranked 40th, Kiran Mazumdar-Shaw of Biocon (77th), and Shobhana Bhartia of HT Media ranked 93rd.
iv. In the list of The World’s 100 Most Powerful Women, German Chancellor Angela Merkel maintained in the top spot. The US presidential candidate Hillary Clinton, and Janet Yellen, chair of the Federal Reserve, were second and third respectively. i. Nato countries biggest ever joint military exercises Anaconda-16 was launched in Warsaw, Poland.
ii. This Exercise is managed by Poland’s Lt Gen Marek Tomaszycki and around 31,000 Polish, US and other troops are participating in the land, sea and air exercises.
iii. Anaconda Exercises are intended to test Nato’s ability to respond to threats also to showcase the strength as a response to concerns about Russia’s assertiveness and actions.

Kulmeet Bawa appointed Adobe MD for South Asia
i. California headquartered Adobe Systems appointed Kulmeet Bawa as Managing Director for South Asia operations. He will fill the shoes of Umang Bedi who is set to leave the company.
ii. Kulmeet Bawa will report to Paul Robson, President of Adobe Asia Pacific, and will start his new role later this month on June 24.
iii. Bawa presently works as the Head of Sales for India operations of Adobe where he has focused on increasing the company’s footprint across verticals, specifically in the Digital Marketing business.

Ashok Ganapathy appointed as Director of Airtel Business
i. India’s largest wireless operator Bharti Airtel appointed Ashok Ganapathy as Director – Airtel Business of its Mumbai, Maharashtra, Goa and Gujarat circles with effective from the 1st of July 2016. He succeeds Manish Prakash.
ii. He will report to the company’s chief executive Gopal Vittal.Ashok assigned with role of driving the growth of Bharti Airtel’s B2B portfolio that works top corporations, government entities and other corporates with end-to-end solutions.
Ashok Ganapathy:
♦ He received B. Tech degree from IIT, Madras and MBA from IIM, Ahmedabad.
♦ He began his career with Hindustan Unilever in 1990 as a management

Umang Bedi to take over as Facebook India MD i. Social Media major Facebook has appointed Umang Bedi as Managing Director, India operations. Bedi will lead in building and maintaining strategic relationships with top clients and regional agencies in the country.
ii. Bedi will succeed Kirthiga Reddy who will be returning to United States to take on a new role at the company’s headquarters at Menlo Park.
iii. Prior to joining Facebook, he was Managing Director at Adobe Systems for South Asia region. He was responsible for making India one of Adobe’s leading markets.

Jayant Kapre quits as President of United Biscuits
i. British multinational food manufacturer United Biscuits president Jayant Kapre has quit after leading the maker of McVities biscuits.
ii. Jayant Kapre is joining as managing director of the American flavours maker International Flavors that makes flavors to soft drinks, biscuits, confectionery and alcoholic beverages.
Jayant Kapre:
♦ He received MBA from IIM-Ahmedabad, Kapre, started his career at Hindustan Unilever in 1996, and later on he had stints with Gillette, Accenture, Wrigley and PepsiCo before joining United Biscuit. i. The International Olympic Committee has conferred the highest award of the Olympic Movement Olympic Order to Indian Olympic Association president N. Ramachandran for his outstanding services.
ii. Ramachandran became IOA president in 2014. Also the former IOA president, the late B.S. Adityan was also presented with the same award, in 1995.
iii. The Olympic Order is the highest award and is bestowed for mainly notable contributions to the Olympic Movement.
International Olympic Committee:
♦ The Sports federation is an international, non-profit, non-governmental organization based in Lausanne, Switzerland, established in 1894.
♦ Thomas Bach is the current President of the sports outfit.

Indian-origin professor in UK awarded by Queen
i. Distinguished Indian-origin professor Lord Kumar Bhattacharyya has been conferred with the prestigious Regius Professorship in Manufacturing by Queen Elizabeth II for his outstanding contribution in manufacturing.
ii. During the course of his dynamic career he has advised the UK government on manufacturing, innovation, and technology also contributed to driving growth and improving productivity.
iii. Warwick Manufacturing Group at the University of Warwick, which was founded by Lord Bhattacharyya, has been bestowed the prestigious Regius Professorship in Manufacturing.

World’s first 3D printed plane THOR unveiled by Airbus
i. The world’s first 3D-printed aircraft was kept on display in the Airbus booth at the 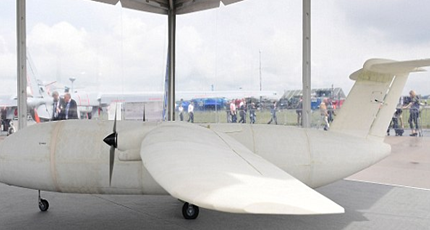 International Aerospace Exhibition in Berlin Germany.
ii. Airbus’ mini-plane, named Thor which stands for Test of High-tech Objectives in Reality that was made as windowless plane weighs 20kg and is less than 4 meters long that assembled with has just 3 parts.
iii. The aircraft is totally 3D printed, apart from the electrical elements, which are erected from a substance called polyamide that makes lighter, faster and cheaper.

India to host junior hockey World Cup
i. The International Hockey Federation (FIH) announced that the men’s Hockey Junior World Cup 2016 will be played in Lucknow in Uttar Pradesh from December 8 to 18 this year.
ii. It will be the 11th edition of the Hockey Junior World Cup for men, since 1985 it has been held every four years. Last Edition was held in New Delhi in 2013.
iii. The men’s event will feature 16 of the world’s best junior men’s teams. The qualified teams include Argentina, Australia, Austria, Belgium, Germany, India, Japan, Pakistan and Spain.
iv. While the men’s competition takes place in December, the women’s Hockey Junior World Cup takes place shortly before in Santiago, Chile in November end.