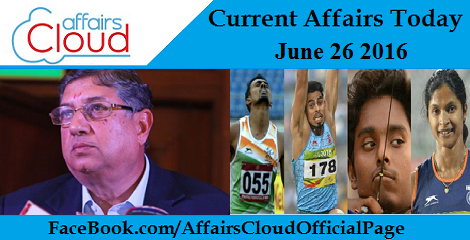 ships after nearly a decade of expansion work aimed at boosting transit revenues and global trade. The expansion is estimated to have cost USD 5.5 billion.
ii. The 102-year-old canal that was put on expansion work began in 2007 and was meant to have been completed in 2014, but it ran well past deadline, and over budget.
iii. A Chinese-based Neopanamax-class cargo ship will be the first vessel to test the new infrastructure, entering from the Atlantic and exiting into the Pacific.
Panama
♦ Capital: Panama
♦ Currencies: United States Dollar, Panamanian balboa

Mahashangarh declared as the SAARC cultural capital for 2016-17
i. An archaeological site in Bogra Bangladesh, Mahasthangarh (3rd century BC site) has been declared as the South Asian Association of Regional Cooperation (SARRC) cultural capital for the year 2016-17.
ii. The cultural capital will be the historic place will host festivals on literature, films, foods and dances from October 2016 to September 2017.
iii. The same year 2016-17 has also be declared the SAARC Year of Cultural Heritage. Mahasthangarh is one of the earliest urban archaeological sites so far discovered in Bangladesh.

Coca Cola to set up plant in Uttarakhand’s Sitarganj
i. American Beverage giant Coca-Cola will set up a bottling plant in Sitarganj in Jharkhand. The Plant will come up in 70 acres of land to be provided by the state government.
ii. The Company will set up the plant with the total investment ofRs.400-500 crore and has submitted an earnest money deposit of Rs.1.26 crore
iii. Coca-Cola executives have completed field inspections and have hired a company as consultant on environmental issues.

Srinivasan unanimously re-elected as TNCA president
i. Former BCCI boss N Srinivasan has been re-elected President of the Tamil Nadu 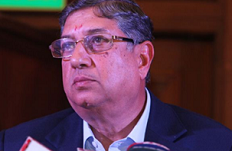 Former India batsman Lalchand Rajput appointed Afghanistan cricket coach
i. Former Indian cricketer Lalchand Rajput was named head coach of the Afghanistan National Cricket Team.
ii. He succeeds ex-Pakistan captain Inzamam-ul-Haq who resigned from the post in April. The Mumbai hailed batsman played two Tests and four ODI matches between 1985 and 1987. After his retirement, Rajput served as joint secretary of Mumbai Cricket Association.
iii. He also coached the India Under-19 and ‘A’ team as well as coach of the Mumbai Indians in the Indian Premier League in 2008.

Four Indian athletes qualified for the Rio Olympics to be held in August this year.
In London Olympics India was represented by 83 athletes.
The List of Qualifiers:

Anju, Gopichand drafted as members of Khelo India
i. India’s sole athletics World Championship medal winner Anju Bobby George and chief national badminton coach Pullela Gopichand have been enrolled as members of Khelo India, a national programme for the development of sports.
ii. Khelo India Committee will be headed by Sports Secretary Rajiv Yadav also this committee has seven-member committee, in which Anju and Gopichand are the two sportspersons.
iii. Anju known for her feats as a long jumper, Anju has recently quit as the president of the Kerala Sports Council.
iv. On the other hand Gopichand was former all-England badminton champion, has been the coach of the Indian national badminton team since 2006.

Noted Malayalam theatre artist Kavalam Narayana Panicker passes away
i. Theatre Artist Kavalam Narayana Panicker passed away due to age related ailments at his residence in Thiruvananthapuram, Kerala. He was 88 year old.
ii. Narayana started his career as a lawyer in 1955 also successfully blended the classical tradition and folk elements in the format of contemporary theatre.
iii. The kerala hailed veteran has received degree in Economics from S D College, Alappuzha and later a Bachelor of Law degree from Madras Law College.
iv. Kavalam served as secretary of the Kerala Sangeetha Nataka Academy in the 1960s, was accorded with Padma Bhushan. 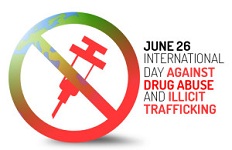 26 annually since 1987 to strengthen action and cooperation to achieve the goal of an international society free of drug abuse.
ii. This year 2016 the day is observed is: Listen First focusses to increase support for prevention of drug use that is based on science and is thus an effective investment in the well-being of children and youth, their families and their communities.
iii. The UN Office on Drugs and Crime (UNODC) has teams up with other organizations, over the years, been actively involved in launching campaigns to mobilize support for drug control.

United Nations International Day in Support of Victims of Torture – June 26
i. The UN International Day in support of Victims of Torture is observed every year on 26 June to speak out against the crime of torture and to honor and support victims and survivors across the world.
ii. The day marks as a reminder to people that torture is a crime. This event also gives everyone a chance to unite and voice their opinions against human torture.
iii. In 1997 UN General Assembly proclaimed the Day this year it marks the 35th anniversary of the UN Voluntary Fund for Victims of Torture, administered by the UN Human Rights Office in Geneva.