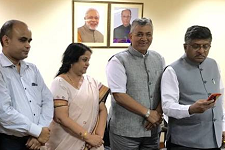 Maha CM launches virtual, digital classrooms across 32 ITIs in state
i. Maharashtra Chief Minister Devendra Fadnavislaunched the new facilities of virtual and digital classrooms in 32 ITIs across the state on the occasion of World Youth Skills Day.
ii. The facilities will be soon extended to all ITIs which will and bridge the rural, urban connect the gap between rural and urban areas.
iii. The CM also announced an initiative to make these classrooms and course content 3D enabled and use of simulators to give hands-on training to youths.
Maharashtra
♦ Governor: C. Vidyasagar Rao
♦ Chief Minister: Devendra Fadnavis

‘Ramayana month’ begins in Kerala
i. The traditional annual Ramayana Month began in Kerala with temples and Hindu houses resonating with the chanting of the epic Ramayana.
ii. The Karkkidakam is the last month in the Malayalam calendar, is observed as the auspicious Ramayana month across the state.
iii. It has been a decade-old tradition that devotees and spiritual classes and discourses on Ramayana by doyens would be conducted in various temples, as well as at the famed Sree Krishna Temple in Guruvayur till the end of the month.

UNESCO declares Nalanda Mahavihara(Nalanda University) as World Heritage Site
The 5th Century ancient seat of learning, ‘Nalanda Mahavihara(Nalanda University) has been declared as a Heritage Site by UNESCO finally. This will be 33rd site to get this tag.
This decision was taken at the UNESCO World Heritage Committee’s 40th session, at Istanbul, Turkey. All 21 Member countries of UNESCO agreed and voted in favour of Nalanda unanimously.
This would be the second UNESCO heritage site in Bihar after Mahabodhi temple in Bodh Gaya.
Tentative List of World Heritage:
♦ Zuojiang Huashan Rock Art Landscape (China)
♦ Persian Qanat (Iran)
♦ Nan Madol (Eastern Micronesia)
♦ Nalanda Mahavihara (India)

Vice President Hamid Ansari unveils Gandhi’s stone statue in Mongolian monastery
Indian Vice President Hamid Ansari has unveiled a stone statue of Mahatma Gandhi at Pethub Monastery in the Ulaanbaatar that is seen as symbol of India-Mongolia cultural and spiritual ties.
♦ After unveiling the statue of the ‘Father of the Nation’, the Vice President also went around the monastery founded by former Indian ambassador Kushok Bakula.
♦ The Pethub Monastery, considered as symbol of India-Mongolia cultural and spiritual ties, was inaugurated in August, 1999 by Indian Vice President Krishan Kant.

11th ASEM summit begins in Ulaanbaatar, Mongolia
i. The 11thedition of Asia-Europe Meeting Summit (ASEM11) or ASEM2016 began with World

leaders including from the leaders of 51 member countries and the representatives of European Union and Asian held in Ulaanbaatar, the capital of Mongolia.
ii. The Summit is held with the theme of 20 Years of ASEM: Partnership for the Future through Connectivity.
iii. Indian delegation is led by Vice President Mohmmad Hamid Ansari with an agenda to push the efforts to boost inter-continental connectivity.

i. The Lifeline Express, the world’s first hospital on a train, aka the Magic Train of India, today celebrates 25 years of service.
ii. This five-coach train provided medical facilities to poor and rural people where there were no hospitals available.
iii. It has completed 173 projects in 18 state and also covered two lakh kilometres distance.
iv. It was given by the Indian Railways in 2007 and served more than 10,00,000 poor in rural India.

RBI allows foreign players to hike stake in Axis, IDFC Bank
i. Reserve Bank of India has allowed foreign investors to up their stakes in Axis Bank and

India slips to third place on business optimism index: Grant Thornton International Business Report (IBR)
i. According to the latest International Business Report (IBR) carried out by London based Grant Thornton, India ranked third during the April­ June quarter of 2016 on the scale of business optimism because of delays in key reforms like the GST and bad loans facing state­ owned banks.
ii. The report went on to say that the growth in employment expectations dropped to second position during this period from top rank in the previous quarter (January­March this year), however the optimism further slipped to fourth place in profitability expectations from third.
iii. In the report revealed India continues to top the chart on expectations of increasing revenue as 96 per cent of the respondents within the survey have voted in favour of increasing revenue.
iv. While the business confidence in India has plummeted, there is a tremendous rise in the optimism for an increase in exports and 35 per cent of respondents expect a rise in exports compared to 13 per cent in the last quarter.
v. India however, continues to rank number 2 in citing regulations and red tape as a constraint on growth for two consecutive quarters.

Tata Advanced Systems, Bell Helicopter sign chopper deal
Tata Advanced Systems Limited (TASL) and Bell Helicopter has signed an agreement to manufacture helicopters under “Make in India” initiative in order to meet civil and military requirements.
The pact includes Production, Training, Research & Development, Maintenance, Repair and Overhaul(MRO) and technology sharing.
This agreement covers both Commercial and Government rotary wing markets in the light utility and reconnaissance segments.
Bell Helicopter:
♦ Bell Helicopter, a Textron Inc. company, has been supplying helicopters to India for more than six decades
♦ The company opened a liaison office in India in 1995.
♦ It has an Engineering and Technology Centre in Bengaluru and also a sales office in New Delhi.

Chinese bullet trains cross at high speeds in world’s first
i. Couple of Chinese made trains running at world-record speeds in opposite directions 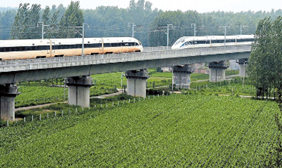 crossed each other on parallel tracks, in the latest feat achieved by China in high-speed rail network.
ii. The two trains Golden Phoenix and Dolphin Blue travelling at 420 km per hour crossed on lines between Zhengzhou in the central Henan Province and Xuzhou in the eastern Jiangsu Province.
iii. This feat using homegrown trains, demonstrated that China has fully mastered the core technology of high-speed trains.
iv. The country has built over 16,000 kms of high-speed train tracks connecting most of the major cities also it is very significant for the branding and export of Chinese high-speed trains.
China
♦ Capital: Beijing
♦ Currency: Renminbi
♦ President: Xi Jinping

NASA’s Next Mars Rover Progresses towards 2020 Launch
i. NASA is in the final design and construction of its next Mars rover, aimed to launch in 2020, which will probe for evidence of past life on the red planet and help prepare for future manned missions.
ii. The rover is set to arrive on the planet in 2021 to study a region of Mars where the ancient environment may have been favourable for microbial life.
iii. The mission is the first step in a potential multi ­mission campaign to return carefully selected and sealed samples of Martian rocks and soil to Earth.
iv. It results important milestone in NASA’s Journey to Mars to find whether life has ever existed on Mars, and to advance our goal of sending humans to the Red Planet.

An Autobiography titled “Courage & Commitment” by Margaret Alva
i. A book titled Courage & Commitment: An Autobiography by Margaret Alva was in news.Alva pensher forty-year career under four Prime Ministers, namely Indira Gandhi, Rajiv Gandhi, PV Narasimha Rao and Manmohan Singh.
ii. It also tells about her transition from politician to Governorand the trials and triumphs and controversies that rocked her career as a politician leading to expulsion from Congress Party in 1979.
iii. Margaret Alva is a political leader from the Indian National Congress, She was the governor Rajasthan and Uttarakhand. Alva was elected to the 13th LokSabha as a Member of Parliament in 1999.