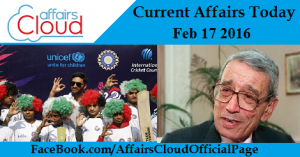 Union Cabinet has given its stamp of approval to ink a concord in the area of Traditional Medicine between Ministry of AYUSH, GOI and World Health Organization, Geneva.

West Bengal government had launched the Utkarsh Bangla Scheme for school dropouts at the Netaji Indoor Stadium in Kolkata.The aim of the scheme is to give vocational training to school dropouts.

The Samej village in Kullu district of Himachal Pradesh becomes smokeless by the Indian Oil Corporation (IOC) under the Union Government’s campaign.

NRDC inks MoA with Indian Association for the Cultivation of Science (IACS), Kolkatta on Technology Transfer”

National Research Development Corporation (NRDC) had inked Memorandum of Agreement (MoA) with Indian Association for the Cultivation of Science (IACS) in Kolkata for technology Transfer at IACS. 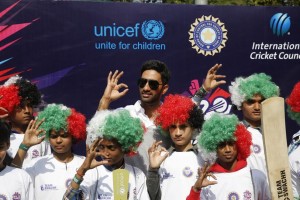 On sidelines of Vice-President Hamid Ansari visit to Thailand, India has participated in the 35thedition of “Cobra Gold” multilateral exercise as an observer plus country, being hosted byThailand.

In a bid to tackle plummet that has battered nations, markets and companies, world’s largest producers of oil, Saudi Arabia and Russia consented to freeze oil output at near-record levels but producer Iran and Iraq stood out of this agreement.

After receiving the stamp of approval from Union Labour Minister Bandaru DattatreyaEmployees’ Provident Fund Organisation (EPFO) has marginally mounted the PF interest rate to 8.8% from 7.75% for 2015-16 financial year. 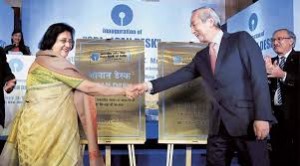 Aim: To be the window for inbound Japanese investments in India and vice-versa.

Supreme Court seeks list of companies who have defaulted over Rs. 500 crore

The Supreme Court had directed the RBI that it seeks the list of companies, which have defaulted bank loans of over Rs. 500 crore.

Professor David Shulman the renowned Indologist had been awarded the prestigious Israel Prize for his infiltrate studies in fields like religion and philosophy.

Indian-Origin Student Honoured In US for His Charity Work

Ishaan Patel an Indian-origin 13 year old boy has been honoured in the US for his charity work.

Sri Srinivasan become the first Indian-American to be on the bench of the US Supreme Court after conservative icon Justice Antonin Scalia’s sudden death.He was nominated  President Barack Obama .

NITI Aayog CEO to be member of Telecom Panel

The Union Cabinet, chaired by Prime Minister Narendra Modi, has given its approval to nomination of Chief Executive Officer, NITI Aayog, as part-time member of the Telecom Commission in place of Secretary, Planning Commission.

HCL Technologies had acquired the Volvo Group’s external IT business.

Captive flight trials of an advanced state-of-the-art Anti-Radiation Missile (ARM) are planned for April-May this year and the maiden flight test by year-end by the missile technologists of the Defence Research and Development Organisation. 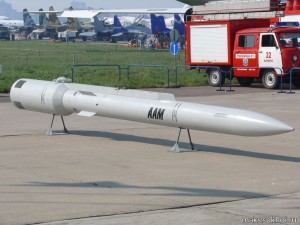 Minister of Information and Broadcasting Javadekar launched a website and mobile application for integrating its Environment Information System(ENVIS) centres.

Javadekar also inaugurated a two-day workshop on National Interaction-cum-kivaluation of all ENVIS systems.

Sridhar of Short Dena Bank’shad been selected as Umpire (Table Tennis) for the comingRio Olympic Games 2016.

Indian Railways has won The National Chess team Championship for the first time at the 36th Championship was held at Bhubaneswar from 8th to 14th February, 2016. 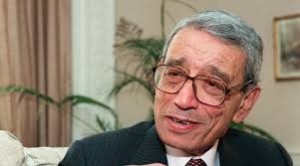 Boutros Boutros-Ghali, a veteran Egyptian diplomat, who helped negotiate his country’s landmark peace deal with Israel but then clashed with the United States when he served a single term as UN secretary-general, has died. He was 93.