We are here for you to provide the important current affairs December 11 2017 which have unique updates of all daily events from all newspapers such as The Hindu, The Economic Times, PIB, Times of India, India Today, Indian Express, Business Standard, all Government official websites. Our complete current affairs helps you to get more marks in Banking, insurance, UPSC, SSC, CLAT, Railway and all other competitive Exams. 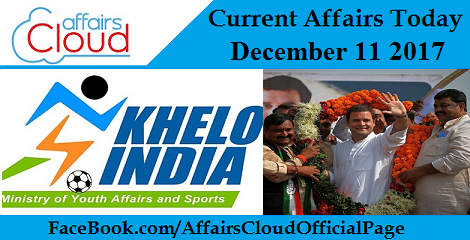 Khelo India programme to be launched at cost of 1,756 cr rupees
On December 10, 2017, Union Minister of State for Youth Affairs and Sports, Col Rajyavardhan Singh Rathore announced that Khelo India programme will be relaunched at a cost of Rs 1756 crore for the period 2017-18 to 2019-20. While making this announcement, Mr. Rathore also stated that 2018 will be celebrated as Year of Sports.
i. Under this programme, Pan Indian Sports Scholarship scheme will be rolled out. Each year, 1000 most talented young athletes across select sports disciplines will be covered in this scholarship scheme.
ii. The selected athlete shall receive an annual scholarship worth Rs. 5 lakh for 8 consecutive years……………………………………………..Click here to Read more

Government launches door-to-door campaign against TB
Union Health Ministry has launched a 15-day door-to-door campaign across the country to eliminate the tuberculosis (TB).
Door-to-door campaign against TB:
i. Under this campaign, aimed to detect, diagnose and treat TB, Accredited Social Health Activists (ASHAs) and TB supervisors will make door-to-door visits to detect Tuberculosis patients and will give them free medical treatment till they are cured.
ii. According to data by World Health Organisation, every year, around 1.1 million TB cases (out of total 2.8 million TB cases) remain unreported and are thereby missed from treatment. The door-to-door campaign is expected to plug this slippage.
iii. Under the Revised National TB Control Programme, Union Health Ministry has set a target to reduce incidences of TB by 90 per cent by year 2025 and reduce mortality due to TB by 95 per cent by year 2030.
iv. Tuberculosis (TB) is a contagious disease which affects the lung and is caused by Mycobacterium tuberculosis (MTB). About ASEA-India Connectivity Summit:
i. Theme of this two-day Summit is ‘Powering Digital and Physical Linkages for Asia in the 21st Century’.
ii. The Summit aims at accelerating existing connectivity prospects, evolving suitable policy recommendations, identifying issues of concern and developing strategies to enhance economic, trade and industrial relations between India and ASEAN member countries.
iii. Infrastructure, Shipping, Roadways, Digital, Energy, Finance and Aviation have been outlined as the focus areas for this summit.
iv. Ministers including Nitin Gadkari, Union Minister for Road, Transport and Highways, Shipping and Water Resources, River Development and Ganga Rejuvenation, Manoj Sinha, Minister of State for Communications (Independent Charge) and Gen. V.K. Singh, Minister of State for External Affairs will be attending this Summit.
v. The Summit has been organized by the Union Ministry of External Affairs (MEA) in collaboration with Confederation of Indian Industry (CII).
Quick Facts about ASEAN:
♦ Founded in – 1967
♦ Secretariat – Jakarta
♦ Membership – 10 countries, 2 observers

15th Meeting of Foreign Ministers of Russia, India and China held in New Delhi
15th trilateral meeting of the Russia-India-China (RIC) foreign ministers was held in New Delhi on December 11, 2017.
Highlights of the meeting:
i. This meeting was held between Union External Affairs Minister, Sushma Swaraj, Russian Foreign Minister, Sergey Lavrov and China’s Minister of Foreign Affairs, Wang Yi.
ii. Discussions at this meeting focused on regional security, issues affecting the Asia-Pacific region, counter-terror efforts and coordination at regional and multilateral forums.
iii. A joint communiqué was also released after the meeting. Both the visiting foreign ministers also called upon Indian President, Ram Nath Kovind.
iv. Before the meeting, Ms Sushma Swaraj had held separate bilateral meetings with both the visiting foreign ministers.

More Information about Shanghai Yangshan Deep Water Port:
i. The port covers 2.23 million square metres areas and has a 2350-metre shoreline.
ii. Once this port is made fully operational, it will handle 4 million TEUs (twenty-foot equivalent units). This handling capacity will be gradually expanded to 6.3 million TEUs.
iii. Several automated handling equipments including machinery used in loading and unloading, bridge cranes, a rail-mounted gantry crane and an automated guided vehicle (AGV) are being used at the port. All these equipments have been designed and manufactured in China by Shanghai Zhenhua Heavy Industries Company.
iv. In order to maintain safety and efficiency, a domestically-developed automated management system is also being used at the port.

US, S Korea, Japan start missile-tracking drill
On December 11, 2017, United States (US), South Korea and Japan started a joint drill to track missiles from North Korea.
US-South Korea-Japan Missile-Tracking Drill:
i. This drill is being conducted in waters near the Korean peninsula and Japan.
ii. This two-day drill is the sixth since June 2016. It is being conducted as a response to recent announcement by North Korea that it has test-fired a new intercontinental ballistic missile (ICBM) and has achieved nuclear statehood.
iii. Two ships from US and one each from Japan and South Korea are participating in this drill.
iv. During the course of this drill, participating warships will simulate detecting and tracking down potential ballistic missiles from North Korea and will share related information.

Highlights of ‘Office Space Across the World 2017’ report:
i. ‘Office Space Across the World 2017’ report evaluated 215 global locations. The rankings were based on occupancy costs per workstation and workplace densities. Occupancy costs per workstation included base rents and common area maintenance charges.
ii. Delhi-NCR ranked 84th with an annual cost of USD 5392 (over Rs 3.5 lakh) per workstation. Other office locations in India ranked below 100, thereby making Indian office market, one of the most affordable across the world
iii. Mumbai’s Bandra-Kurla Complex (BKC), which ranked 163rd in the global list was the second most expensive location in India with rental costs of over Rs 200000 per annum per workstation.
iv. The list was topped by Hong Kong with an annual cost of USD 27431 per workstation. Hong Kong was followed by London and Tokyo.

Pakistan depreciates currency after talks with IMF
In the last week, Pakistan allowed its currency (Pakistani rupee) to depreciate after important talks with the International Monetary Fund (IMF). Recent Depreciation of Pakistani Rupee:
i. This decision was taken to ensure materialisation of $2.5 billion worth of receipts from two international bonds launched in November 2017.
ii. As a result, on December 8, 2017,  Pakistani Rupee touched Rs. 110 against US dollar and closed at Rs. 107 at the end of the session.
iii. First round of discussions (between Pakistan Government and IMF) on external sector of Pakistan’s economy concluded on December 8, 2017.
iv. State Bank of Pakistan (SBP) will now allow Pakistani rupee’s exchange rate to adjust as per market conditions.
v. This currency adjustment is expected to help shift foreign currency holdings in commercial banks, back to official reserves. Currently, foreign currency holdings in Pakistan’s commercial banks is at a higher level of around $6 billion.
Quick Facts about Pakistan:
♦ Capital – Islamabad
♦ Currency – Pakistani rupee
♦ Current Prime Minister – Shahid Khaqan Abbasi
♦ Important River – Indus

India’s economy expected to grow at 7.5 % in 2018: Nomura
Global investment bank Nomura has predicted India’s economy to register a 7.5 % growth rate in 2018, saying it is on the cusp of a cyclical recovery.
India’s economy expected to grow at 7.5 % in 2018:
i.Nomura said in the report that, the Indian economy is on the cusp of a cyclical recovery. The government has continued to implement structural reforms and prudent macro policies, the benefits of which may be harder to pinpoint right now, but over time will be positive for growth.
ii.It said higher crude oil prices and state election results are the main risks. Given the base effects, Nomura expects the growth in the first half of 2018to be at 7.8 %.
iii.It listed out factors supporting a strong growth: normalisation of GST related supply disruptions, positive effects of bank recapitalisation, positive remonetisation impulse and positive fiscal impulse.
About Nomura Group:
Headquarters – Tokyo, Japan
Group CEO – Koji Nagai
Chairman – Nobuyuki Kog Prof. M.S. Swaminathan – Yeraringan Award:
i.The Governor of Tamil Nadu, Banwarilal Purohit and other dignitaries were present on the occasion.
ii.In 1947, Prof. Swaminathan moved to the Indian Agricultural Research Institute (IARI, Pusa) in New Delhi as a post-graduate student in genetics and plant breeding.
iii.He qualified for the Indian Police Service but chose a different career path leading to food security for India.
iv.He was a Fellow of many of the leading scientific academies of India and the world, including the Royal Society of London and the US National Academy of Sciences.
About Royal Society of London:
Formation – 1660
Headquarters – London, England
President – Venkatraman Ramakrishnan

Ram Nath Kovind awards Presidential Colours to submarine arm of Navy
On 8th December 2017, President Ram Nath Kovind awarded Presidential Colours to the submarine arm of the Indian Navy that is celebrating its golden jubilee.
Presidential Colours to submarine arm of Navy:
i.The event was held at the headquarters of the Eastern Naval Command (ENC) at Vishakapatnam. President Ram Nath Kovind was given a 21-gun salute upon his arrival at the ENC headquarters.
ii.He also inspected a guard of honour at the INS Circars Parade Ground. It was attended by Navy Chief Admiral Sunil Lanba, Andhra Pradesh Governor ESL Narasimhan, Chief Minister N Chandrababu Naidu, Flag Office Commanding-in-Chief of ENC Vice-Admiral Karambir Singh and other senior officers of the force.
Some of the submarines of Indian Navy:
INS Arihant, INS Chakra, INS Sindhughosh, INS Sindhudhvaj and INS Sindhuraj World’s Biggest Floating Solar Project begins operation in China
A unit of China Three Gorges Corporation is building a $151 million floating solar power plant, the world’s biggest, in the nation’s eastern province of Anhui, China.
World’s Biggest Floating Solar Project in China:
i. China Three Gorges Corporation started building the 150-megawatt project in July 2017. Part of the plant has connected to the grid.
ii. The project features panels fixed to floats on the surface of a lake that formed after a coal mine collapsed. The entire facility is expected to come online by May 2018.
iii. India has recently commissioned its largest floating solar power plant in Wayanad, Kerala.
About China Three Gorges Corporation:
♦ Headquarters – Beijing, China
♦ Industry – Electricity
♦ Founded – 1993 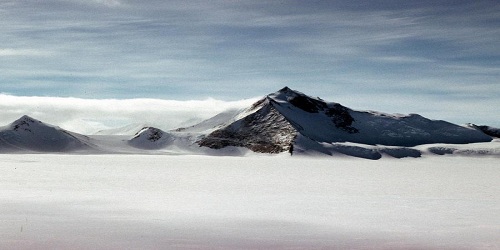 i. The final match was held at Kalinga Stadium in Bhubaneswar, Odisha.
ii .Australia beat Argentina by 2-1. Two goals from Austrlian side were scored by Blake Govers and Jeremy Hayward, while Agustin Bugallo scored one goal from Argentinean side.
iii .In the bronze-medal play-off, India beat Germany by 2-1. This match too was played in Bhubaneswar.
iv. Odisha government presented a cheque of Rs 10 lakh to each Indian player for winning this bronze medal.
v. India has won bronze medal in Hockey World League for the second time. Earlier it won bronze in 2014-15 season played at Raipur, Chhattisgarh.

Death of Lalji Singh:
i. Lalji Singh was 70 years old. He was the 25th vice chancellor of the BHU (Banaras Hindu University).
ii. He was also the recipient of the prestigious Padma Shri award. He was the founder of the Centre for Cellular and Molecular Biology (CCMB), also served as its director.
iii. He was the officer-on-special-duty (OSD) at the Centre for DNA Fingerprinting and Diagnostics (CDFD) in Hyderabad between 1995 and 1999.
iv. He also founded Laboratory for the Conservation of Endangered Species (LaCONES).
About DNA Fingerprinting and Diagnostics (CDFD):
♦ Established – 1990
♦ Location – Hyderabad, Telangana
♦ Operated by – Department of Biotechnology, Ministry of Science and Technology

Veteran journalist Batuk Gathani passes away
Batuk Gathani, veteran journalist and foreign correspondent for Indian and international news organisations passed away in London.
Death of Batuk Gathani:
i.Batuk Gathani was 82 years old. He was born in Nairobi to a Gujarati business family. He reported for ‘The Hindu’ and ‘Frontline’ from Europe for several years.
ii.He was president of the Indian Journalists Association for several years. After retiring he continued to be an active member of the Indian community in the U.K. and the Indian Journalists Association.
About The Hindu:
Owners – The Hindu Group, and Kasturi and Sons Limited
Publisher – N. Ram
Headquarters – Chennai
Founded – 1878 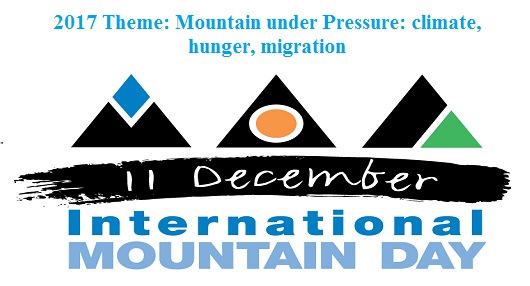