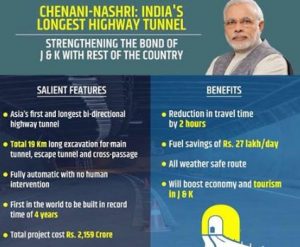 i. The Prime Minister of India Narendra Modi inaugurated the India’s longest Chenani-Nashri All-weather road tunnel on the Jammu-Srinagar National Highway on April 2, 2017. The tunnel is among the longest highway tunnels in Asia.
ii. The tunnel was built at a cost of Rs 2519 crore at an altitude of 1,200 meters above sea level. The Chenani-Nashri tunnel is India’s 1st and the world’s 6th tunnel to have transverse ventilation system, providing fresh air to passengers.

Radhamohan Singh inaugurated International Center for Foot and Mouth Disease
i. India’s first International Centre for Foot and Mouth Disease (ICFMD) has been inaugurated by Union Agriculture Minister Radha Mohan Singh  at Argul near Bhubaneswar in Odisha on 1st April 2017.
ii. This centre will play a key role in protecting livestock from Foot-and-Mouth Disease Virus (FMDV).
iii. Construction of ICFMD started in April 2014. The estimated cost has been Rs. 450 crore. Indian Council of Agricultural Research (ICAR) has funded the establishment cost. 100 acres of land for the centre has been provided by Odisha State Govt.

Mizoram becomes 27th State to join UDAY scheme
The Memorandum of Understanding (MoU) was signed between Government of India (GoI) and Mizoram under the scheme Ujwal DISCOM Assurance Yojana (UDAY). The agreement was signed for operational improvement of the State’s Power Distribution Department.
♦ By this agreement Mizoram would get an overall net benefit of approximately Rs.198 crores by participating in UDAY.
♦ This benefit is achieved in the way of cheaper funds, reduction in Aggregate Technical and Commercial (AT&C) and transmission losses and interventions in energy efficiency.
Benefits
i. Improves the operational efficiency of the Power Distribution department of the State.
ii. Reduction in AT&C losses and transmission losses to 15% and 50% respectively will bring additional revenue of around Rs.166 crores.
iii. Demand Side interventions in UDAY such as usage of energy-efficient LED bulbs, agricultural pumps, fans and air-conditioners will reduce power consumption
iv. Usage of efficient industrial equipment through Perform, Achieve and Trade (PAT) would help in reducing peak load and thus help in reducing energy consumption in the State. 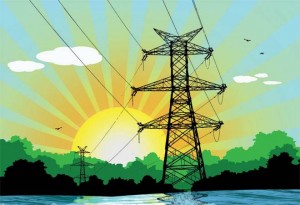 NDB invests USD 1.5 billion in 7 projects in past 2 years of operation: Kamath
The New Development Bank (NDB) backed by BRICS has invested a total of USD 1.5 billion through 7 projects in the year 2015 and 2016. The information was shared by NDB president K V Kamath during the second annual meeting of the bank on April 1, 2017.
♦ Out of the seven projects, six of the projects were from renewable sectors and one in transport financing sector. The first ever project signed by NDB is with China in December, 2016. The second loan was signed with projects in India.
Plans by New Development Bank (NDB)
i. The NDB is planning to raise up-to $500 million through ‘masala bonds’ and increase its exposure to infrastructure projects in India.
ii. The NDB has begun its work for opening a regional centre in Africa which is to be completed by May, 2017.
iii .Bank has an approval to raise 10 billion renminbi from China, out of which it has raised 3 billion renminbi.
* Renminbi is the currency of China.
About New Development Bank (NDB)
New Development Bank (NDB) is a multilateral development bank established by the BRICS (Brazil, Russia, India, China and South Africa)
♦ Formed in July 2015, it is also known as BRICS Development Bank.
♦ Headquarter: Shanghai, China.
♦ President: K V Kamath.

Full Multi-Crore Heavy Duty Satellite to be made by Private sector – ISRO
i. For the first time, Indian Space Research Organization (ISRO) on April 2, 2017 assigned a task of making two Full Multi-Crore Heavy Duty Satellites to Alpha Design Technologies, a private sector high-tech defense equipment supplier.
ii. A team of 70 engineers is working to make a flight ready satellite in the next six months. A sum of Rs 400 crore is signed up with the company to give India its first large private satellite.
Background
♦ The NAVIC or the Swadeshi GPS system is fully functional. But to be on a safer side, ISRO needs two spare satellites on the ground for a quick launch in case something went wrong. So this project is carried out.
♦ This decision was made by ISRO after almost 150 missions and three decades of space explorations, seeking help from a private industry to make a full navigation satellite.
Indian Space Research Organization (ISRO) 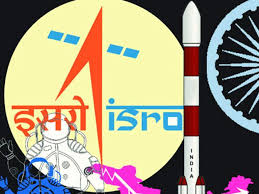 Rajiv Kumar Chander appointed as Permanent Representative to Geneva UN offices from India
Rajiv Kumar Chander, who is from 1983 batch Indian Foreign Service (IFS) officer, has been appointed the Ambassador and Permanent Representative of India to the UN offices in Geneva (UNOG) on March 30, 2017.
♦ He will succeeds Ajit Kumar, who is from 1979 batch Indian Foreign Service (IFS) at the Geneva office in May, 2017.
Positions held by Rajiv Kumar Chander
i. Rajiv Kumar Chander first assignment abroad was at the Embassy of India in Moscow.
ii. After that, he worked as First Secretary (Political) in Germany and then in New Delhi as Director (UN) in early 1990’s.
iii. In 2000 to 2002, Chander was posted to St. Petersburg as Consul General.
iv. Chander served as Deputy Permanent Representative in the Geneva office from 2006 to 2009.
v. Chander served as India’s Ambassador to Ukraine from July 2011 to July 2015.At present he is the Consul General in Vancouver, Canada.
About United Nation offices at Geneva (UNOG)
♦ United Nation office at Geneva (UNOG) is the 2nd largest of the four major office sites of the United Nations after United Nations Headquarters in New York City.
♦ The Director General of UNOG is Michael Moller from Denmark

MP E-Nagarpalika APP launched by Madhya Pradesh to provide Municipal Services Online
The Madhya Pradesh government has launched mobile application MP e-Nagarpalika to provide various municipal services online. The App was launched by Chief Minister of Madhya Pradesh Shivraj Singh Chouhan.
♦ The mobile app is the part of Rs 225-crore e-nagarpalika project, under which all municipal services would be made available online on a unified web platform.
Benefits
i. A total of 378 services which includes online payment of property tax, seeking building permission, birth, marriage and death certificates are provided through this app. 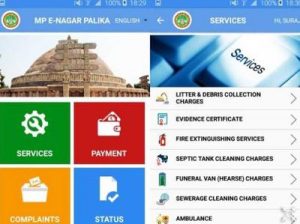 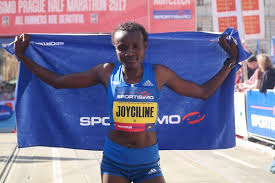 i. Joyciline Jepkosgei passed 10 km mark at 30:05 breaking previous record of 30:21 set by Paula Radcliffe in 2003.
ii. She crossed 15 km mark at 45:37 which surpassed the world record of 46:14 set by Florence Kiplagat in 2015.
iii. Jepkosgei finished the race with 1:04:52 beating world record time of 1:05:06 set by Peres Jepchirchir at the Ras Al Khaimah Half Marathon in UAE.
About Prague Half Marathon
♦ Prague Half Marathon is an annual half marathon road running event which takes place in spring on the city streets of Prague in Czech Republic.
♦ Established in 1999, the first winner of this event was Ali Mabrouk El Zaidi in men’s category and Jana Klimešová in women’s category.
♦ The record timing of men’s category is held by Atsedu Tsegay of 58:47 in 2012.

World Autism Awareness Day observed on April 2 ,2017
i. World autism Awareness Day is observed on 2nd April every year by United Nations (UN) member countries to raise awareness about autism and problems faced by people suffering from it.
ii. World Autism Awareness Day Theme 2017: ‘Toward Autonomy and Self-Determination’
iii. The National Trust, a statutory body functioning under Ministry of Social Justice and Empowerment, has organised a National Conference on Autism on 3rd April 2017 in New Delhi. Minister of Social Justice & Empowerment, Mr. Thaawarchand Gehlot will inaugurate the conference.