We are here for you to provide the important Current Affairs February 24 2019, which have unique updates of all daily events from all newspapers such as The Hindu, The Economic Times, PIB, Times of India, PTI, Indian Express, Business Standard and all Government official websites. 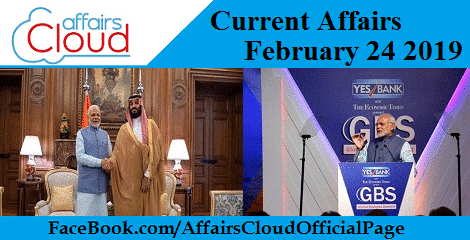 NITI Aayog co-hosted Conference on The Future of Indian Banking
“The Future of Indian Banking” conference was co-hosted by NITI Aayog along with the Foundation for Economic Growth and Welfare (EGROW Foundation) on February 22, 2019 at the Civil Services Officers’ Institute (CSOI), New Delhi. Dr. Rajiv Kumar, Vice Chairman, NITI Aayog, inaugurated the event.
i. It was aimed to increase and elevate the discourse on the banking sector in India, and help develop insights to inform the continued evolution of the Indian banking sector for optimally supporting the growing credit needs of the Indian economy.
ii. The progress made by the Indian banking system in the past 4 years that provided a strong foundation for a long runway for expanding credit and supporting accelerating growth of India’s economy, was highlighted by Dr. Rajiv Kumar, and he indicated that there was still a lot of work to be done in improving the financial system and furthering reforms in the financial sector.
iii. Chief Economic Advisor (CEA) Krishnamurthy Subramanian suggested taking forward the P J Nayak committee’s recommendations on governance reforms in Public Sector Banks (PSBs) and said that the risk in the sector would persist until these reforms were institutionalised.
iv. He also advised diversification of business model by PSBs so that lenders were able to absorb any economic shock. 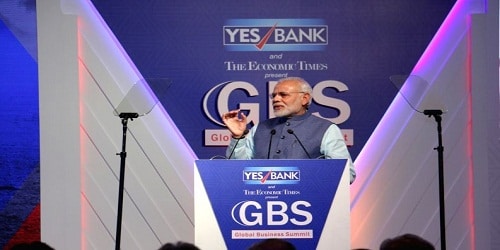 Key points:
i. He announced that India would be a 10 trillion-dollar economy- the third largest in the world.
ii. He highlighted the role of his government’s policies in establishing a high growth rate and controlling inflation.
iii. The government would provide conducive environment for start-ups and promote renewable sources of energy.
iv. He said that the government works towards the upliftment of all the sections of the society, and does not discriminate on the basis of their economic profile, their caste, creed, language and religion.
v. He highlighted the role of the government in establishing the highest post-liberalisation growth rate of 7.4 per cent and lowest inflation of less than 4.5 per cent.
vi. He said that 100 smart cities are being built across the country and also mentioned high speed trains and their development and elimination of all unmanned railway crossings. 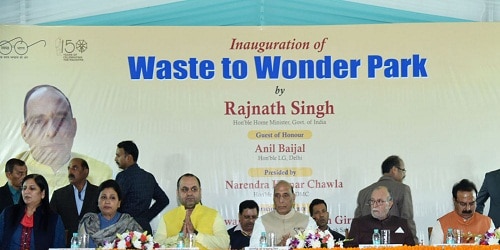 i. It was built by the South Delhi Municipal Corporation (SDMC)and is the first-of-its-kind tourist attraction in the world, with the replicas of the Taj Mahal, the Great Pyramid of Giza, Eiffel Tower, Leaning Tower of Pisa, Christ the Redeemer statue of Rio de Janeiro, Rome’s Colosseum, and the Statute of Liberty.

Union minister Smriti Irani launched the Integrated Large Scale Eri Farming in Arunachal Pradesh
Union textiles minister Smriti Irani,during her 2-day visit to the North-East, launched the Integrated Large Scale Eri Farming under North East Region Textile Promotion Scheme (NERTPS) in Itanagar, Arunachal Pradesh and will cover about one thousand acres land for Eri Farming in the chosen districts of the state.
i. 5 districts of the state,namely,Papumpare, East Kameng, Siang, East Siang and West Siang, will be covered by the project initially.The cost of project is Rs 37.25cr with GoI share of Rs 35.65cr.
ii. Government has decided to provide financial assistance to 4000 beneficiaries under NERTPS and skill training will be imparted to eri silk farmers and weavers under the Samarth Scheme.
iii. The project aims to support Eri food plantations and also empower the tribal women of the state with employment opportunities and sustainable livelihood.
About Arunachal Pradesh
♦ Capital – Itanagar
♦ Chief Minister – Pema Khandu
♦ Governor – Brig. Dr. B. D. Mishra The projects are:
Integrated Soil to Silk Project i. Free sanitary napkins will be provided to 17.25 lakh adolescent girl students of Class 6 to 9 studying in government and non-government aided schools of the state. It will also cover Kendriya Vidyalayas and Jawaharlal Navodaya Vidyalayas.
ii. Each girl student will be provided with 18 beltless sanitary napkins per month.
iii. Other objectives of the scheme include reducing the expenditure of the parents towards health care of the girls, reduction in the dropout rate among girls, improved attendance in schools and increase in academic parameter.
The scheme will be implemented in coordination with the School and Mass Education, Scheduled Tribe & Scheduled Caste Development and Minorities and Backward Classes, and Social Security & Empowerment of Persons with Disabilities departments.
Related Points

Telangana CM presented Rs 1.82 lakh cr interim budget for 2019-20
On 22nd February 2018, Telangana Chief Minister K. Chandrashekhar Rao presented a Vote-on-Account Budget for the year 2019-20.
Key points:
i. It is an interim budget.
ii. The total expenditure is valued to be Rs 1,82,017 crore which is 4 percent higher than the previous year- out of which there is a revenue expenditure of Rs 1,31,629 crore and a capital expenditure of Rs.32,815 crore.
iii. The estimated revenue surplus is pegged at Rs 6,564 crore and fiscal deficit is Rs 27,749 crore which is2.81 percent of Gross State Domestic Product (GSDP).
iv. Revenues for Budget Estimate (BE)of 2019-20 of the state are valued at Rs 94,776 crore.
v. A sum of Rs 1810 crore has been allocated in the Budget to fund an unemployment allowance of Rs 3,016 per month to the eligible youth.
vi. Rs. 6,000 crores have been allocated to waive off agricultural term loans of up to Rs. 1 lakh.

Government decided to stop share of Indus water to Pakistan
On the lines of Pulwama terror attack, Union Minister Nitin Gadkari announced that India has decided to stop the flow of its share of water to Pakistan.
In this regard, Centre is planning to build projects on 3 rivers flowing into Pakistan, to divert water towards Yamuna.
i. The water will be diverted from the eastern rivers and supplied it to Indians in Jammu and Kashmir and Punjab.
ii. Under the Indus Waters Treaty, India shares water of the Beas and Sutlej rivers with Pakistan.

FATF remained Pak in “Grey” list for failing to stop terror financing
On 22nd February 2019, Financial Action Task Force (FATF)condemned the Pulwama terror attack in Kashmir,which led to death of 40 CRPF jawans and decided to keep Pakistan in the ‘grey’ list owing to continued funding of terrorist groups such as Jaish-e-Mohammad, Lashkar-e-Taiba and Jamat-ud-Dawa.
It stressed on the fact that Pakistan should work continuously to formulate an action plan and work to reduce its strategic deficiencies, analyse the terror financing risks posed by the terrorist groups and conduct supervision on the basis of risk-sensitivity.
About Financial Action Task Force (FATF)
Headquartered in Paris, FATF is an international terror financing watchdog.
Its ‘Gray’ listing means downgrading of the country by multilateral lenders like International Monetary Fund (IMF), World Bank, Asian Development Bank (ADB), and European Union (EU).

3-day navy drill from Gulf to Indian Ocean announced by Iran
Iran announced that it will be launching a 3-day annual navy drill named “Velayat 97” in the Gulf and the Indian Ocean, including a sensitive global shipping route, with an aim to evaluate the equipment of the navy, practice launching weapons and enable the troops to gain readiness in battle.
i. It will be held in the waters of Strait of Hormuz, Makran coast, Oman Sea and the north of the Indian ocean and will cover an area of 2 million square kilometres.
ii. It will showcase Iran’s submarines, warships, helicopters and drones and will also include missile launches from the vessels.
Related Point

President Bashir declares year-long state of emergency in Sudan
On 22nd February 2019, a state of emergency was declared in Sudan by its President Omar al-Bashir. The government was dissolved at both the cabinet and local levels.
i. It was due to continuous protests by the general public since 19 December who were furious by the mismanagement of the nation’s economy and wanted the leader to step down.
ii. He has appointed 16 army officers and two security officers as new governors for the 18 provinces of the country.
About Bashir
♦ He rose to power in 1989 by overthrowing the elected government of then leader Sadiq al-Mahdi.
♦ He faces charges of war crimes and genocide in Darfur and is also wanted by the International Criminal Court.
♦ His term ends in 2020.

RBI bundles NBFCs into a single type to offer operational flexibility
On 22nd February 2019, the Reserve Bank of India (RBI), in accordance with an announcement made during the last bi-monthly policy, decided to create a single category for the NBFCs (non-banking financial companies) by bundling their present three-tier structure. It was also decided that exposures to all NBFCs, excluding core investment companies, will be risk weighted as per credit ratings.
i. These steps have been undertaken to provide greater operational flexibility to the NBFCs, reducing the number of categories into which they are divided, on the principle of regulation by activity and not regulation by entity.
ii. In this regard, asset finance companies, loan companies and investment companies have been categorised as NBFC- investment and credit companies (NBFC-ICCs).
iii. A deposit taking NBFC-ICC will be required to make an investment of an amount less than twenty per cent of its owned fund, in unquoted shares of another company which is not a subsidiary company or a company in the same group of the NBFC. 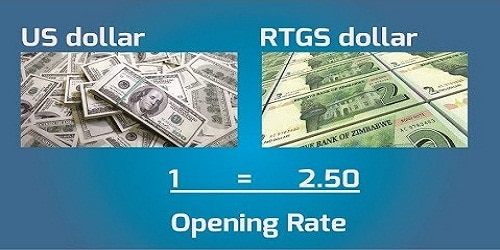 i. The currency was launched at an initial rate of 2.5 RTGS dollars per US dollar.
ii. This step was undertaken to do away with hyperinflation and fiscal deficit issues the country had been facing and the shortage of dollars which had been negatively impacting the economy.
iii.The new currency replaces electronic bank savings called digital dollars and the bond notes and was named after the real-time gross settlement system that banks use to transfer money between each other. 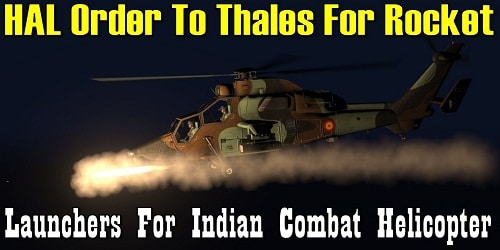 Overview Of The “Digital India Awards 2018”

JSPL won the FICCI CSR Award for Women Empowerment
Jindal Steel and Power Ltd (JSPL) was conferred with the prestigious ‘FICCI CSR Award‘ for Women Empowerment for its innovative and high impact women empowerment programmes, implemented by the company’s CSR Arm – JSPL Foundation, across its operational areas in India.
i. Director, JSPL and the Co-Chairperson of JSPL Foundation Shallu Jindal received the award from Union Commerce and Industry and Civil Aviation Minister Suresh Prabhu in New Delhi.
About FICCI CSR Awards

Justice Uma Nath Singh takes oath as First Lokayukta of Nagaland
On 22nd February 2019, Justice Uma Nath Singh took the oath as the first lokayukta of Nagaland. He was formerly the Chief Justice of Meghalaya High Court. His tenure would last for a period of 5 years or until he turns 70, whichever occurs earlier.
i. The oath was administered to him by Governor of Nagaland P.B Acharya at Raj Bhavan. The ceremony was also attended by Chief Minister of Nagaland Neiphiu Rio, Opposition Leader T R Zeliang, Cabinet Ministers, MLAs and other dignitaries. 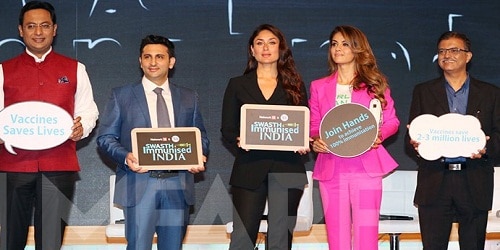 i. She caught a ball which was dropped from a drone,80 metres above the cricket ground.
ii. The record was previously set by the England’s Kristan Baumgartner with a catch from 62 metres and before her, former England captain,Nasser Hussain held it with 49 metres.
iii. The record attempt was part of the campaign carried out by the International Cricket Council (ICC) and Cricket Australia in collaboration, to set the highest attendance figure for a women’s sporting fixture during the final of the ICC Women’s T20 World Cup 2020, which will be held on 8th March, 2020 at MCG,coinciding with International Women’s Day.